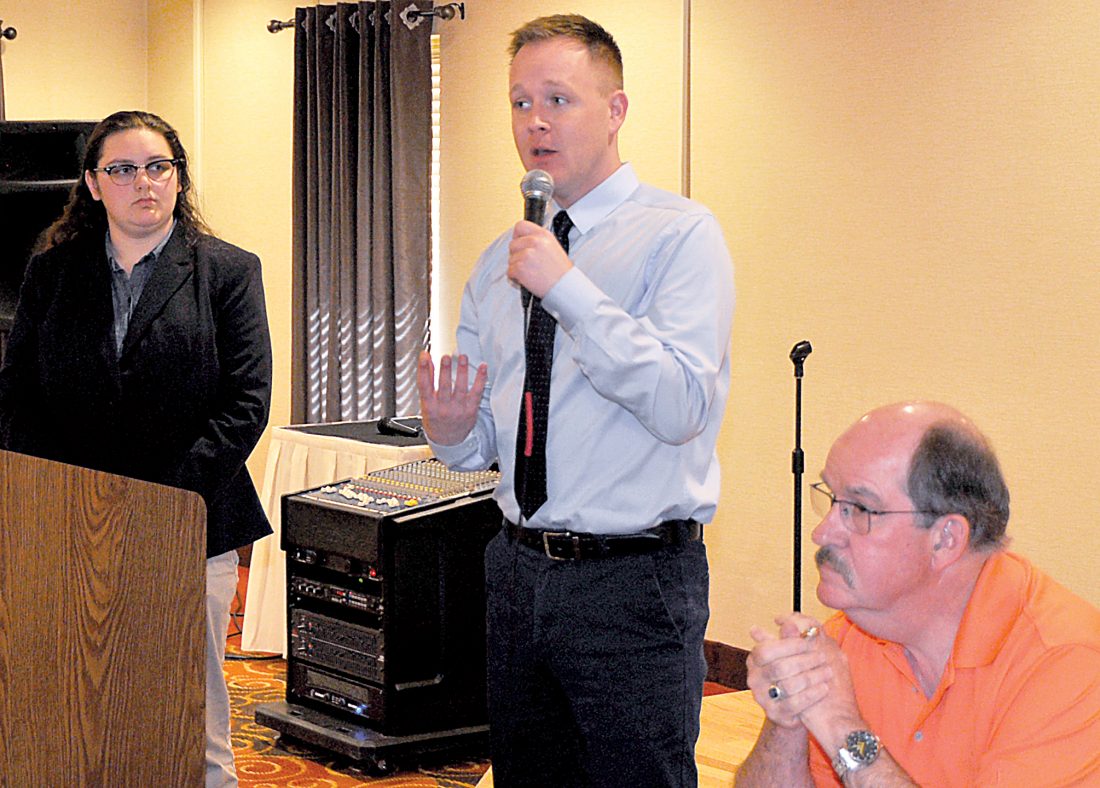 ELKINS — Two local lawmakers answered questions for an hour Thursday during the Legislative Luncheon offered by the Elkins-Randolph County Chamber of Commerce.

Sen. Bill Hamilton, R-Upshur, and Delegate Cody Thompson, D-Randolph, spoke before a crowd of more than 50 during the event Thursday at the 1863 Appalachian Bistro.

The moderator for the event, Emily Coffman, the 2018 salutatorian for Davis & Elkins College, noted at the outset, “We’re going to focus on some of these bills which got a little less attention this year.”

She asked about Senate Bill 1, which passed during the legislative session, and is aimed at increasing access to career education and workforce training.

Thompson, who is a teacher, said, “I was very excited about this bill … We have a great need in our state for tech jobs, and we often neglect the students who may go into those fields. This is going to revolutionize and really get kids involved in going into a technical field.”

Hamilton said, “I didn’t like the way the bill finally came out .., but you’ve got to have a compromise at times… I think it will bring seniors to the state. You know, we were one of only 13 states that taxed Social Security benefits.

“In the same sense, let’s just remember, we’re also giving coal companies a severance tax break, and that’s $20 million the first year, $60 million the second year and $120 million the third year. We passed that bill, we didn’t have any concerns about that. I voted against that bill because I have a concern about what that will do to our budget down the road. I don’t want to put our future legislators in dire straits,” Hamilton said.

Thompson noted, “I wanted a full repeal, a total elimination of the Social Security tax … That didn’t happen. It’s going to be phased in over three years, and there’s caps on it. It’s not going to be for everyone … which I didn’t agree with.”

Coffman asked the legislators to discuss one business-related or economic issue that will be addressed in the next legislative session.

Thompson pointed out the Legislature passed a bill this year about “innovation zones” which was then vetoed by Gov. Jim Justice.

“It was going to give us more flexibility and draw to develop our industries uniquely around the state,” he said, noting Elkins and Randolph County were included in the plan. “Unfortunately that bill was vetoed by the governor after it passed both houses. So I would like to see something come back out of that. Something to bring in new businesses, maybe something that’s out of the box. We’ve got to think out of the box… we need diversification, we’ve got to bring in new industries.”

Hamilton then offered what he said was a “controversial” take.

“We still haven’t solved this PEIA picture,” he said. “At some point in time, we’ve got to take a serious look at the privatization of PEIA. We need to put this out for bid, turn it over to Aetna, BlueCross, Highmark or whoever else wants to take it over. We did it with workers’ comp in 2006 … we’ve got over 250 companies selling workers’ comp in West Virginia now.”

A written question submitted from the audience asked the lawmakers to comment on the opioid crisis.

“Addicts are a problem, but they’re not the enemy. The pushers are the enemy,” Hamilton said.

“We need more drug rehab units in West Virginia. If you dry up the people who are using the drugs, then the dealers are going to go away, they’ll go somewhere else,” he said.

Thompson agreed, adding that another modern enemy is a doctor who “oversprescribes pain pills, which leads down the road to illegal drug use.

“We need more drug education, more warning signs of, ‘Hey, kids, this is what’s going to happen'” if you abuse drugs.

Sen. Greg Boso, R-Nicholas, and Delegate Bill Hartman, D-Randolph, were invited to Thursday’s event but were unable to attend.

Lisa Wood, executive director of the Elkins-Randolph County Chamber of Commerce, welcomed the crowd to Thursday’s event and introduced the participants.