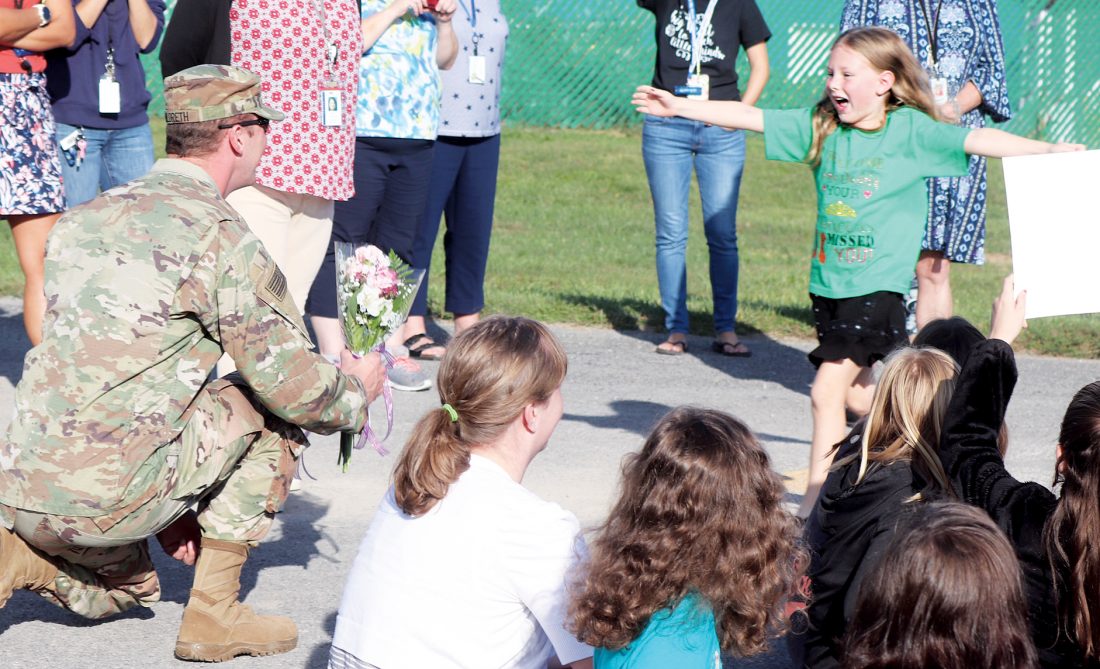 The Inter-Mountain photos by Amanda Hayes Tennerton Elementary first-grader Kara Hildreth runs into the arms of her father, Captain Michael Hildreth, who surprised her by returning home from a six-month deployment.

TENNERTON — Many students at Tennerton Elementary and a certain 6-year-old thought they were dedicating new playground equipment, but the school had a more patriotic celebration in mind for 9 a.m. Monday.

As principal Tristen Gray said a few words about the playground, he referenced someone who would discuss safety protocol with the students.

That person turned out to be Captain Michael Hildreth, father of first-grader Kara, who turned with the rest of the students in time to see her father coming towards them.

Kara’s mouth opened in surprise, she waved and moments later she ran with arms wide open flinging herself into the arms of her father who she had not seen since March.

Hildreth, who serves with the West Virginia Army National Guard 1092nd Engineer Battalion, returned to Buckhannon about 1 a.m. Saturday after a six-month deployment in Romania. 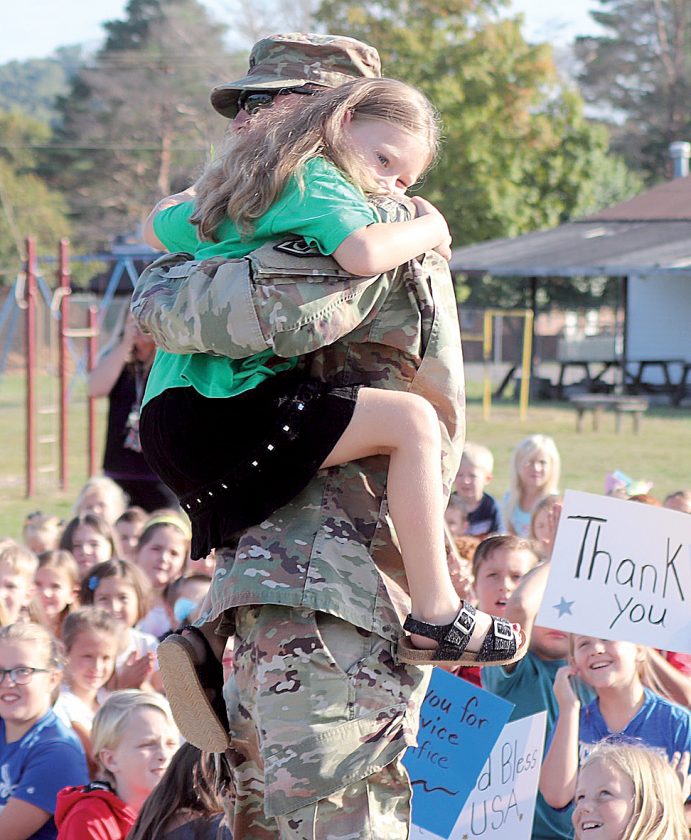 Then, he and wife Lisa, had to make sure he stayed hidden from Kara until the school surprise Monday.

“It was a little hard because I wanted to see my daughter,” he said. “Since my wife told me they were putting together a ceremony, I didn’t want to ruin the ceremony.”

After finally getting to see and hug his daughter, Hildreth said he was happy. The Hildreths also have a son, 2-year-old Derek, who came to the school with them for the surprise.

Lisa approached the school at the beginning of the school year about her husband’s return home and talked with secretary Janet McDaniels.

“I have to give most of the credit to Mrs. McDaniels,” she said. “I came to Mrs. McDaniels when school started and said, ‘Michael is going to be coming home around September and I would like for it to be a big surprise for Kara. I think surprising her at school would be the biggest surprise.’ 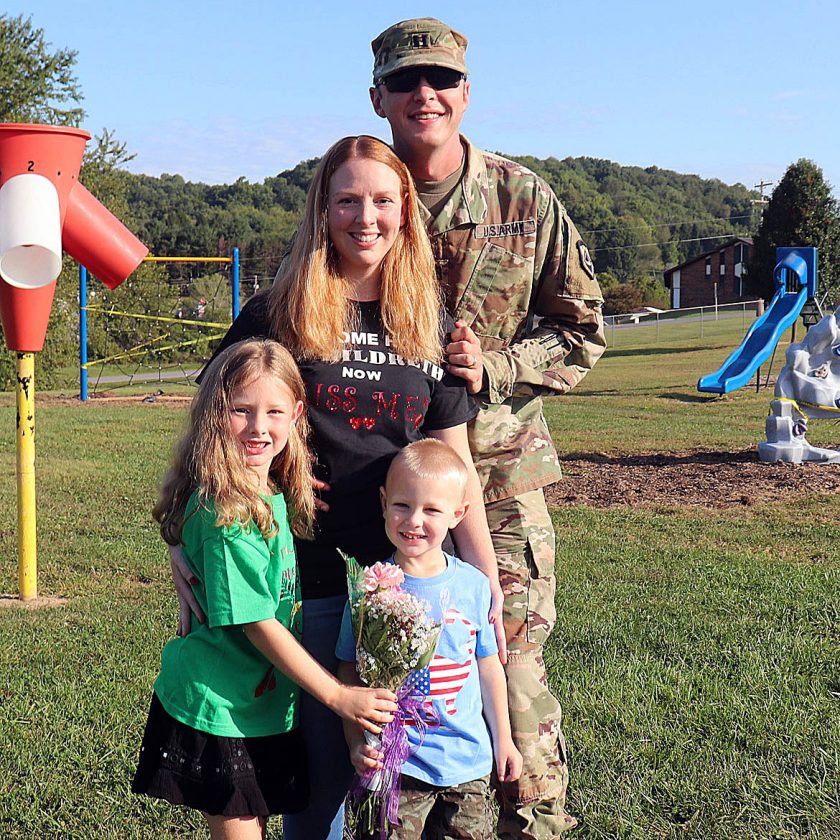 “She said ‘what an experience to give whole school. We have never done this before to get the whole school involved and open up a conversation about respect and what families go through and what the military does for us.’ She was the one the one who went with it.”

McDaniels said she thought it would be a wonderful opportunity to teach students respect and recognition of veterans.

“I saw one of the fifth graders walk down the hall and he was smiling about 8:30 a.m.,” she said. “He said, ‘I cannot wait until 9 a.m. This is the best day.’ For them to have that excitement, is something they will always remember. When they see them on TV now, they will think I was a part of one of those.”

Gray said, “We knew Michael was coming back and we knew he was going to want to surprise Kara. We honestly thought it would be later in the week or maybe next week because of the hurricane. He was in North Carolina. Then, he called his wife Lisa and said, ‘I’m actually coming home today.’

Gray added, “With Patriot Day coming up on Wednesday, we got to celebrate a patriot today.”

Lisa said it took a little coordination to make sure the surprise wasn’t spoiled early.

“The hardest part was the long weekend until Monday morning,” she said. “He was still calling her so we had to make sure that I wasn’t in the background or the baby or the dog while he was making her phone calls to her.”

Kara wasn’t available for an interview afterwards because she went back to her first-grade class.

“She wanted to go back to class,” Lisa said. “Daddy is going to have lunch with her but she didn’t want to interrupt her learning time because he is back now and she can spend all the time she wants with him.”

Kara’s mom is also thankful to have her husband home.

“It’s a stress relief for me,” she said. “I don’t have to handle everything on my own anymore.”

Hildreth said this was his first overseas deployment.

“Being apart from my family is the hardest,” he said. “They are growing and they have their lives. Pretty much anytime you are away things happen, but it seemed like a lot of things that I wasn’t expecting pop up while you are away.”

Hildreth said he was able to use modern technology such as Facetime and Facebook Messenger to talk with his family thank to the good cell service he had in Romania.

He asked people to remember there are more service members who are deployed away from family and friends.

“We have lots of service members overseas all the time,” he said. “Remember, there are a lot of people away from their families especially with the holidays coming up. That’s why I like those organizations like the USO and Operation Gratitude which were huge morale boosters while we were over there. It’s nice to have a little piece of home. I had a couple boxes of Girl Scout cookies sent to me through those organizations.”