Submitted photos Nevada Tribble stands among her paper-cast rocks that she’s carefully placed for her show ‘Ripple’ in the Bloom Studio Space in Thomas.

Pictured are plant-like lighting elements that Nevada Tribble custom made for the El Gran Sabor restaurant in Elkins.

Nevada Tribble recently created a sewing machine bike that allows her to continue her fiber arts while she’s out and about. 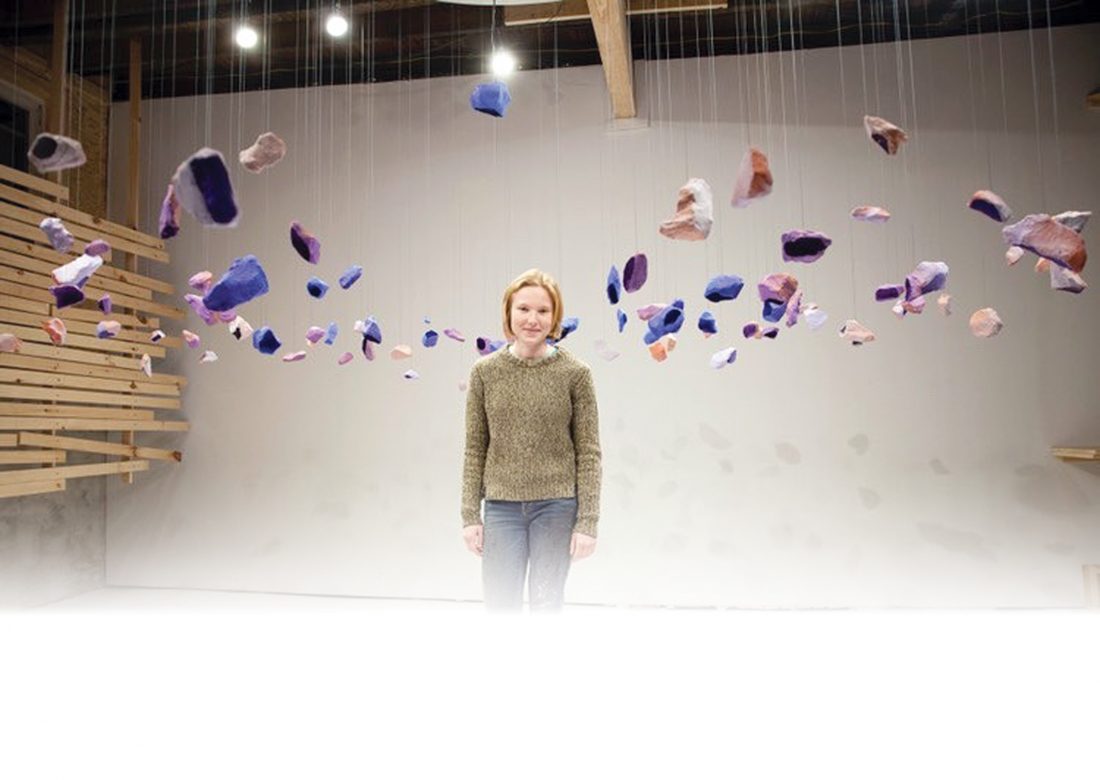 Submitted photos Nevada Tribble stands among her paper-cast rocks that she’s carefully placed for her show ‘Ripple’ in the Bloom Studio Space in Thomas.

ELKINS — Nevada Tribble, a 2015 graduate of Elkins High School, has made her debut in the art world and is exhibiting her creations across the state of West Virginia.

Tribble moved to Elkins from Ely, Nevada, when she was 10 years old but frequently refers to the mountains of West Virginia as her home.

“I quickly got attached to the West Virginia mountains and the supportive and welcoming community I found in Elkins,” Tribble stated in an interview with The Inter-Mountain.

Tribble said she’s always been a “maker,” taking classes at the Randolph County Community Arts Center from a young age, but struggled until recently to find her creative medium.

“I wasn’t that into drawing, painting or digital art,” she said. “But, like a lot of people, I had never really learned to think of sculpture as more than carving stones or modeling with clay. Sculpture can be those things, but it also encompasses any three-dimensional artwork.” 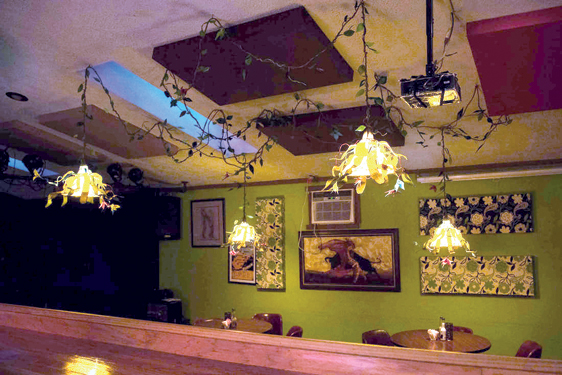 Pictured are plant-like lighting elements that Nevada Tribble custom made for the El Gran Sabor restaurant in Elkins.

Now, Tribble mainly focuses on fiber arts, including making her own paper and sewing.

“I have always been drawn to paper. Every time I walk into an art supply store, I stare at all the colors and textures in the paper section for ages,” she said. “With guidance from one of my professors, I built my own paper press out of scrap metal and a bottle jack and started experimenting.”

After graduating from Elkins High School in 2015, Tribble decided on Shepherd University to pursue a bachelor of fine arts in sculpture, where she will continue studying until May of this year.

In her time at Shepherd, Tribble has collaborated on a myriad of exhibits and installations, and was named an Emerging Artist Fellow by the Tamarack Foundation for the Arts.

One of her notable works, titled “Compound Vision” and currently installed at the Popodicon Garden in Shepherdstown through April, features concrete, a medium that Tribble was initially unfamiliar with. 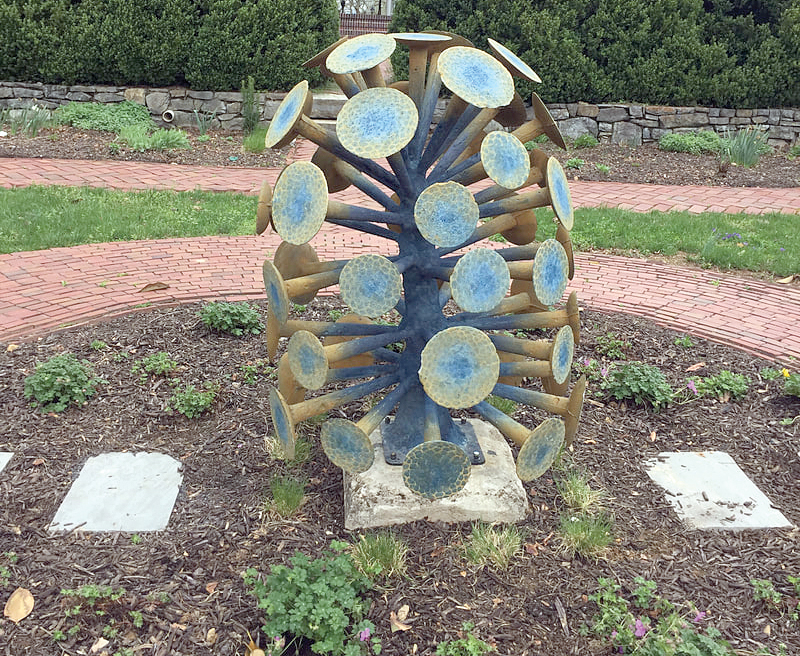 “I got the opportunity to create that piece by submitting a proposal to a contest that Shepherd holds yearly,” she said. “With the help of one of my professors, I made molds for the repeating shapes that make up the sculpture. I spent several weeks mixing a batch of concrete twice a day to pour in the molds until I had enough to assemble the piece.”

The work is an “abstract interpretation of the faceted surface of a bee’s eye,” said Tribble, because the mission of the Popodicon Garden is to create a safe haven for pollinators.

Another project Tribble has recently been working on is a portable sewing machine attached to a bicycle.

“While working at Elkins Sewing Center a couple summers ago, I learned a technique called free motion quilting,” she said. “I have been using this technique in my drawing class to create all of my drawings with a sewing machine and thread instead of charcoal or pencils.”

She became interested in portability after a request from a professor to draw from life whenever possible, including landscapes and outdoor scenes. 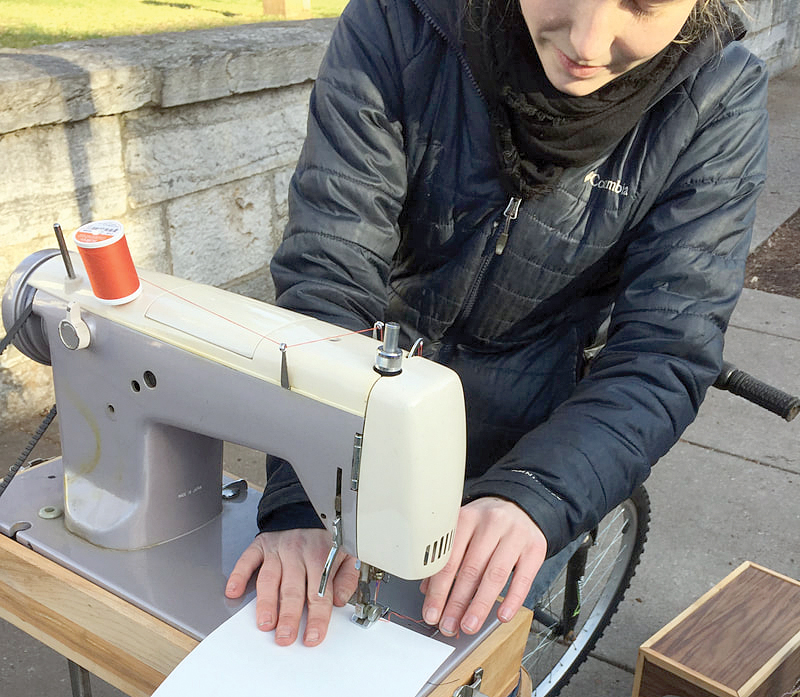 Nevada Tribble recently created a sewing machine bike that allows her to continue her fiber arts while she’s out and about.

“This posed a problem, because I would have needed a pretty long extension cord to be able to use my sewing machine to draw all those things,” said Tribble. “The bicycle-powered sewing machine is my solution to that problem.”

A sewing machine within a protective case is mounted behind the seat of the bike. Tribble rides the bicycle to the spot where she wants to draw. When she’s ready to create, she lowers the kickstand, turns around on the seat and turns the pedals, which powers the needle and allows her to sew.

Currently, Tribble is showing an installation at the Bloom Gallery in Thomas titled “Ripple.” The installation features paper-cast rocks, as well as instrumental sounds — created with the help of local musician and instrument maker Bob Smakula — to set the tone for the immersive show.

“If I mold freshly-made, wet paper around a form, the paper holds that shape as it dries,” said Tribble. “This is how I have been creating paper copies of rocks and other objects.”

“This show was inspired by the simple act of throwing pebbles into water. The title of the show, ‘Ripple,’ is a reference to the large impact that small acts can make,” she said. “When I am overwhelmed by the weighty problems of the world, thinking of this potential impact helps me remember how to cope and move forward.”

Tribble hopes to return to Elkins after graduation and open an art business consisting of a community studio space for local artists and an exhibit area to showcase rotating artists.

“I want to fill a different niche in the community than the existing art organizations by having a focus on contemporary art,” said Tribble. “In the event space, I plan on hosting visiting artists to bring fresh ideas and diverse experiences to the community through workshops, artist talks and other programming.”

She is also in the process of designing a sculpture for the Serenity Garden being created at Davis Medical Center.

Those who would like to see Tribble’s work can visit the Bloom Gallery in Thomas through February, the Popodicon Garden in Shepherdstown through April, and also the Elkins restaurant El Gran Sabor, for which she created special lighting.