The Inter-Mountain photos by Shannon Bennett Campbell When arriving at the CCC Museum, a ‘bunkhouse’ will take your attention, as well as the American flag briskly blowing in the afternoon sun.

Each CCC boy or girl was given a trunk upon arrival to keep their eating utensils and other necessities.

,The Inter-Mountain photos by Shannon Bennett Campbell Many West Virginia communities had CCC encampments, as depicted by museum wall photos. 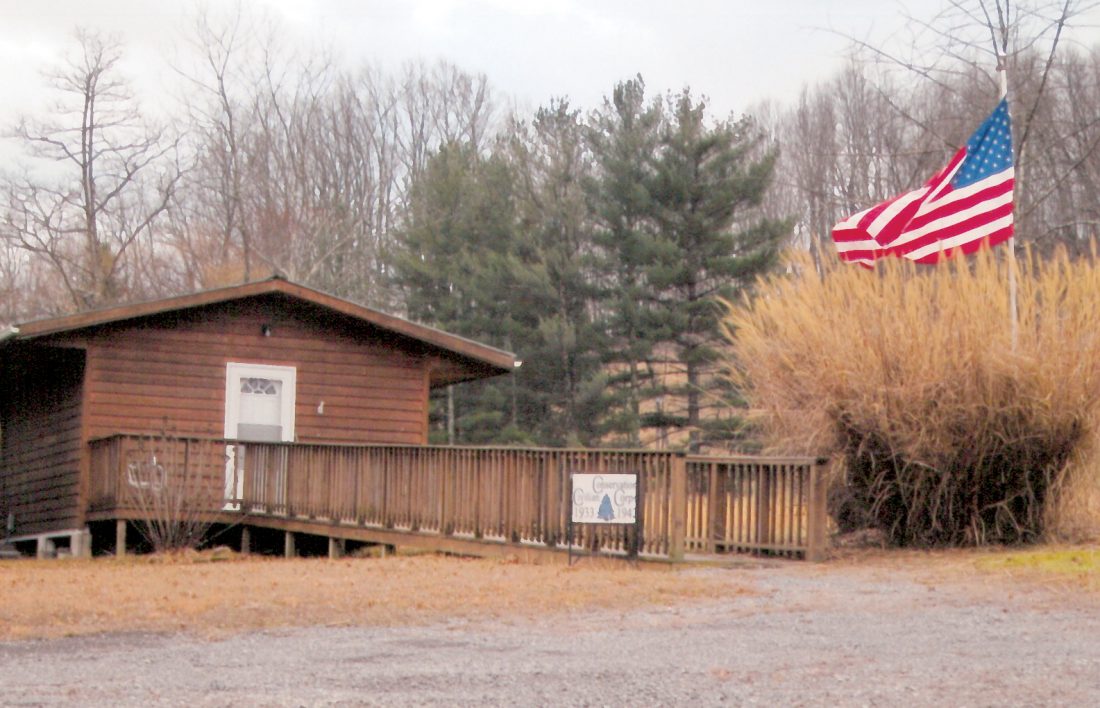 The Inter-Mountain photos by Shannon Bennett Campbell When arriving at the CCC Museum, a ‘bunkhouse’ will take your attention, as well as the American flag briskly blowing in the afternoon sun.

As winds picked-up and clouds hid the sun much of the way, a recent journey on I-79 North bid me to Stonewood Exit 115, where Quiet Dell, a small community east of Clarksburg, sits.

Taking a right turn onto Rt. 20, my car only had to travel not half-a-football field to arrive at a very special place. On my side of the road appeared the old schoolhouse I had been told about where the Civilian Conservation Corps (CCC) Museum was located. I pulled my vehicle around to the back where parking was ample.

The brochure indicated Monday through Saturday hours of operation to be 10 a.m. to 5 p.m. with afternoon Sunday tours available from 1 to 5 p.m. Waiting inside was a wonderful surprise — a very kind, knowledgeable tour guide with a wealth of information and stories that would not quit.

I was captivated by Becky Smolski’s descriptions of this CCC Museum, and one cannot walk in the building without feeling that its history is still alive and well as one examines some of those who lived and worked during this Franklin Delano Roosevelt New Deal Era Program. With almost a haunting affect, viewing the more than 500 pieces of memorabilia will assuredly change one’s outlook on the way we live life today.

The Great Depression left Americans wringing their hands about what to do. The CCC as it was known, rose in 1933 as the first of FDR’s New Deal projects, and by any measure it was not only a tremendous undertaking, but a solidly successful achievement when considering how many people were involved and the visible results of their work. The CCC represented a work program suitable for not only sustaining individual Americans, but produced remedies that took care of vital national needs. 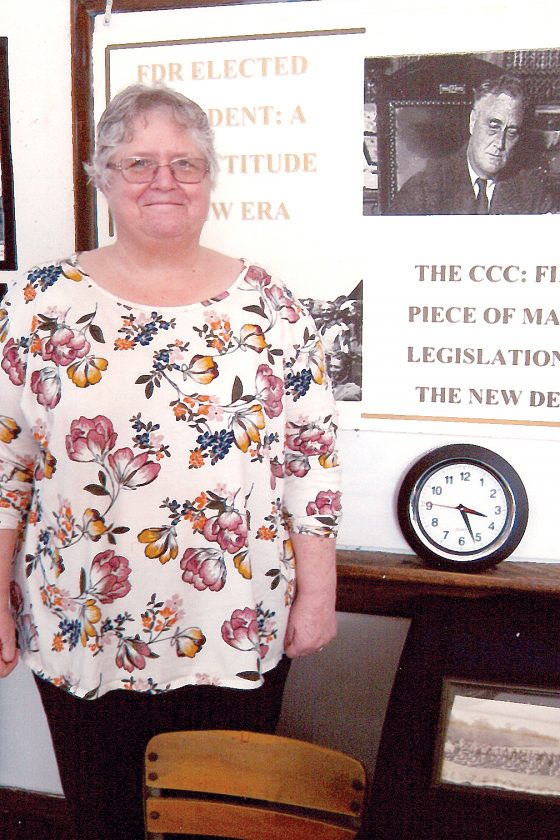 The museum’s advertising brochure describes just the results of the 67 West Virginia encampments as “building hundreds of bridges; planting millions of trees and developing more than 30 state and national parks and parkways.” Additionally, the brochure explains, “Thousands of cabins, picnic shelters, lodges and park furniture, lakes, ponds and swimming pools were completed.” Indeed, much of what we see today as we view our beautiful West Virginia State Parks had their roots in this recovery program.

Another huge effort described in the Museum’s hand-out was “erosion control where 1.600 enrollees worked with farmers on over 48,000 West Virginia acres on 418 farms as recorded in the 1936 West Virginia Blue Book.”

Smolski explained that the youth who participated usually sent at least three-quarters of their monthly salary back to their families to help them have monies to pay the bills. They also sent to their parents gifts from the camp’s canteen. As a wall poster noted, “They frequently thought about their homes and parents and sent gifts to let them know they were on their minds and still in their hearts.”

One learns by reading informative items in the museum that nationally 225,000 World War I veterans took this opportunity to rebuild their lives, and 85,000 American Indians and 400,000 illiterate enrollees were taught to read and write through educational programs offered by the Corps.

Additionally, one learns during the tour that the lifestyle of these individuals was a very simple one. Each was given a “footlocker” (trunk) with items they were to use and be responsible for in everyday camp living, including a plate and cup. They each washed their own clothes, lived together in a bunkhouse with assigned blankets and used a common bathroom to shave and shower. Meals were provided. Participants were expected to have respect for God, country, authority and dignity. 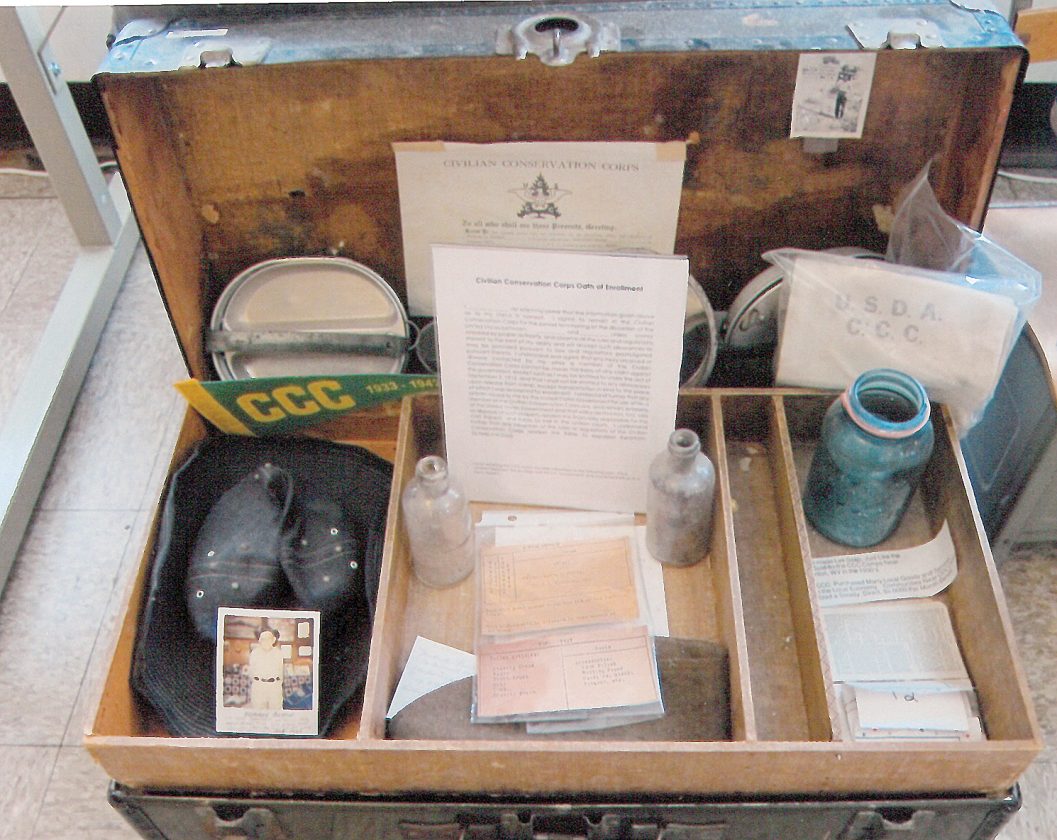 Each CCC boy or girl was given a trunk upon arrival to keep their eating utensils and other necessities.

Along with the extensive CCC program for males, Eleanor Roosevelt, the president’s wife, led the charge to include provisions for an “All-Girl” CCC Camp Program, as was noted in “Happy Days,” Aug. 12, 1933, the official paper of the CCC.

Being a former educator, I believe that every secondary school child would benefit by seeing this exhibit so they could learn about and understand the role played by the CCC boys and girls, who were responsible for establishing most of our state’s parks.

In addition to the fabulous CCC displays, an adjoining craft area affords one an opportunity to review the skills required to produce warm clothing and hats for those living at that time. It may spur an interest in learning to sew; it may cause a true sense of humility when one compares our way of life today with how these individuals struggled to have a life nearly 100 years ago.

We are the results of people who had nothing, but were determined, when our government reached out to them, to reach back, work hard, and make something of themselves. They, no doubt, suffered and I am sure they shared moments of true sorrow when they had to leave their homes to find work that was so difficult. But they found the strength to persevere and with the help of God not only survived, but built parts of America we still view today.

Be prepared to have a change of attitude when you walk out of this place and understand its moment in time. You may think it would be a good thing for Americans to repeat the history you will find here. Indeed, I observed a spirit and strength I have never seen before. And, of all the columns I have written (more than 100 now) this is the first one that caused me to weep as I penned the last word. 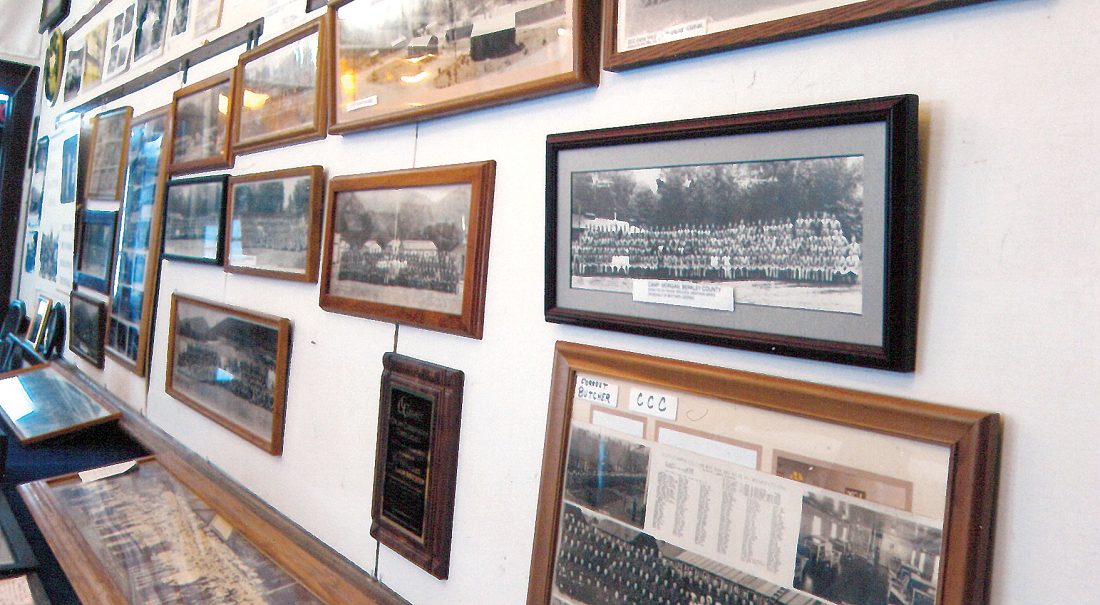 ,The Inter-Mountain photos by Shannon Bennett Campbell Many West Virginia communities had CCC encampments, as depicted by museum wall photos.

The ability to attain some form of education, the access to meaningful work and the skills in managing money received are paramount to survival and happier outcomes in our world. Only clear minds and heartfelt devotion can assure this.

The 1906 Nobel Peace Prize Winner Theodore Roosevelt, in David Pratt’s “The Impossible Takes Longer,” proclaimed, “Far and away the best prize that life offers is the chance to work hard at work worth doing.” Let our government leaders never relinquish their efforts to develop jobs that give purpose to life.

Author’s Note: Special seasonal events are planned at the CCC Museum throughout the year and information can be obtained by going to WVA-CCC-LEGACY.ORG or calling 304-622-3304.

Perhaps in the end this will make us stronger