Living Through the Great Depression

Submitted photos From left, brothers Ira Miller, 103, Ralph Miller, 97, and Glenn Miller, 94, reminisce about family moments from the past while gathered around a kitchen table. The brothers and their nine other siblings grew up during the Great Depression. 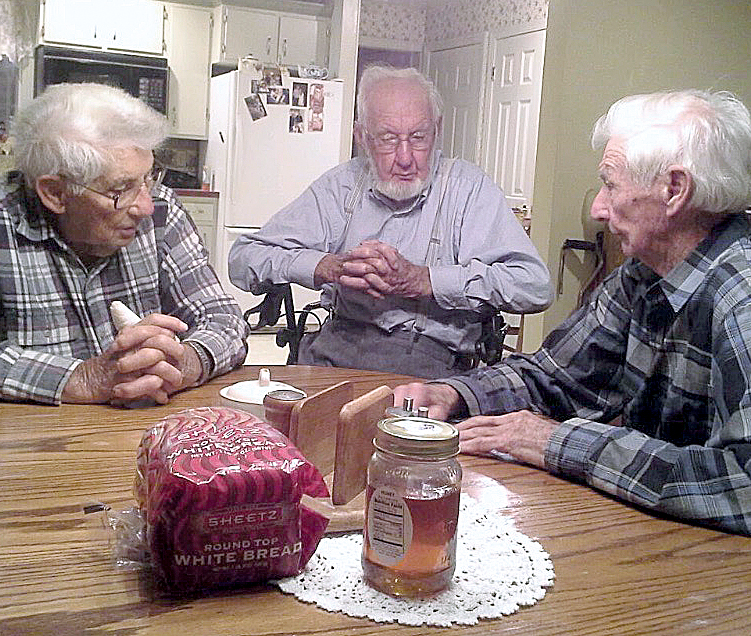 Submitted photos From left, brothers Ira Miller, 103, Ralph Miller, 97, and Glenn Miller, 94, reminisce about family moments from the past while gathered around a kitchen table. The brothers and their nine other siblings grew up during the Great Depression.

PARSONS — Three brothers, each of them 94 years old or older, all former or current West Virginia residents, reminisced recently about their lives as members of a 12-child family growing up during the Great Depression.

Out of six sisters and six brothers, Ira Miller, Ralph Miller, and Glenn Miller are the only siblings remaining.

Glenn Miller, the youngest boy of the Miller family, resides in Parsons, where he has lived for the past 54 years. He turned 94 in February.

During Glenn Miller’s childhood, he and his family spoke Dutch.

“When I started to go to school, I didn’t know how to speak English. We talked Dutch at home,” he said. “I went to a country school for four years. The country school that I went to was in our community and back then, everyone walked to school. The school was half a mile from where we lived, so we walked every day. 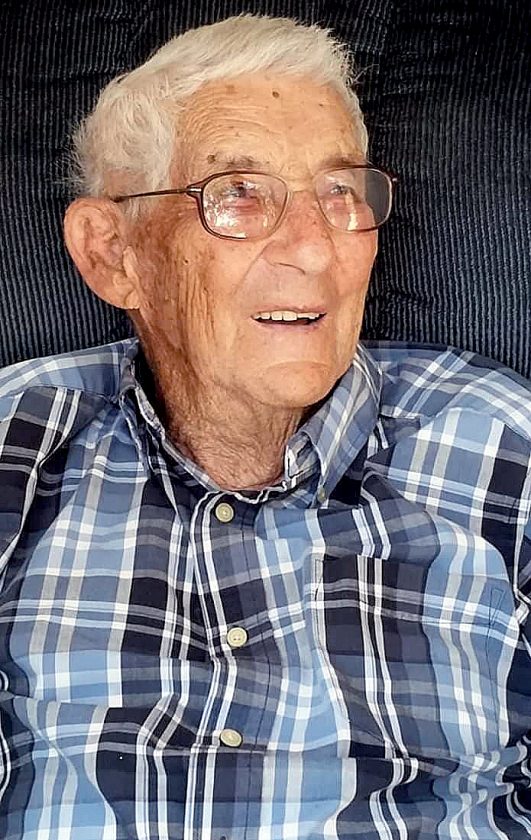 “My father had two farms and we moved to another farm. I was in the fourth grade when we had to go to a town school. I liked school. Everybody knew each other and talked to each other in the country school but at the town school, I was a stranger so no one would talk to me. I went to school and finished sixth grade, went two days in seventh grade and then I quit,” he said.

Glenn Miller grew up during the Great Depression and experienced what life on the farm was like at that time.

“The depression was in 1932 and Roosevelt was president,” he said. “Of course we lived on the farm. My dad and I would go to the grocery store once a month to get sugar, salt and spices. We had our own meat and produce. In the fall we would butcher pigs and beef.

“I was too young to know anything about the depression. We didn’t have electric or telephone. The only light we had was kerosene light and once it got dark, you went to bed because you couldn’t read or anything.”

His mother was an only child and was raised Amish. Along with caring for her large family, she was a school teacher. Glenn’s mother passed away at age 104 and his father passed at 87. 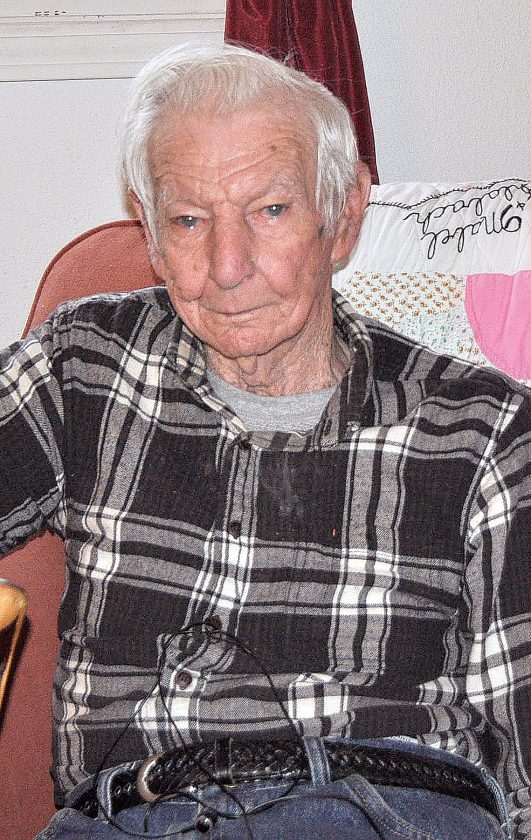 “She experienced traveling in a covered wagon to riding in an automobile to flying in a plane!” he said. “Something my mother always said was, ‘The best way to make ends meet is to get off the end you are sitting on.'”

Glenn Miller said he has witnessed many major changes in the world during his lifetime.

“In 1939, my dad bought a car for $600. I would have been 14 or 15 years old at that time,” he said. “We went to Florida and my dad bought a lot down there to build a house. Back then, my brother Ralph, who is three years older than I am, and I were cultivators for a muck farm. We raised celery and lettuce. We had to cultivate by hand and we got 15 cents an hour.

“We lived on a farm so we had to butcher pigs and then we would smoke them in our smoke house. We didn’t have electric or a refrigerator or anything like that. We would take the sausage and smoke it. Then my mother would cook it, put it the crock and pour hot lard over top of it to keep it. She would also can things.

“In the 50s, I worked as a mason and was paid $4.60 an hour,” he said. “Things were different back then. We didn’t have a lock on the house. We would work from sun up to sun down in the field and of course we would take a break for lunch. 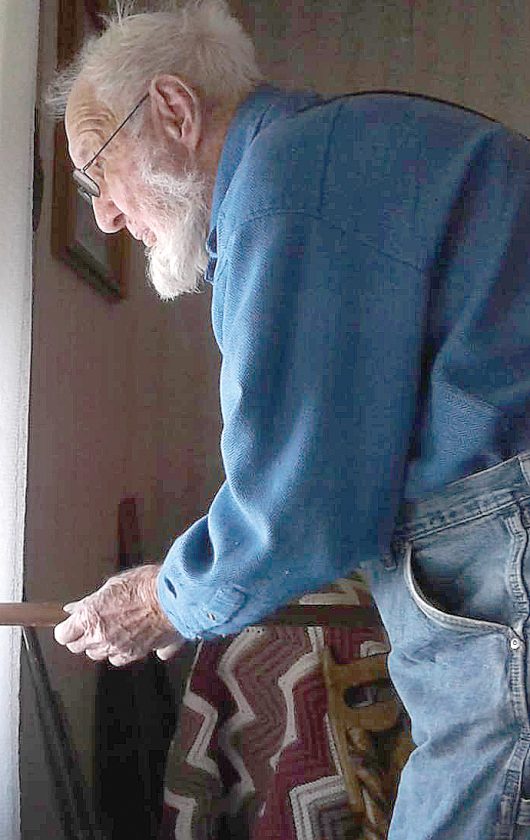 “Everything was done by horses, we didn’t have tractors until later on. All of the kids worked. You didn’t have spending money or toys like we do today. It is just completely different nowadays.”

Glenn Miller got married at 27 and was married for 53 years. He has three living children, one deceased son, seven grandchildren, and five great-grandchildren.

His brother Ralph Miller, 97 years of age, was born in Indiana. At age 5, he moved to Delaware where he lived most of his life. He spent two years in West Virginia and a year in Canada, plus several extended visits helping with mission work in Northwest Ontario.

As a young boy, he worked at home on the farm and used horses to cultivate and plow. Later, he bought his own farm where he grew vegetables for a local cannery. He was one of the first local farmers to have irrigation or to use black plastic.

Ralph Miller also worked as a carpenter and mason. After retirement, he made an abundance of wooden pieces such as clocks, canes, and more. He gifted these handmade items to his loved ones.

He still lives on his own and is often seen out riding in his golf cart checking on the neighborhood. He still attends church and enjoys talking to friends on the phone.

Over the last century, he has lived in Kansas, Michigan, Indiana, Delaware, New Jersey and in West Virginia.

As a young boy, he worked on a farm for $9 a week. He drove chickens to New York City, Philadelphia, Washington, D.C., Baltimore and Pittsburgh.

He worked as a carpenter, bus driver, farmer, mail carrier, and was an orderly in a mental ward in New Jersey during World War II. While he worked in the mental ward, he met the famous American artist Norman Rockwell.

Ira Miller is a father to seven children, and also a grandfather and great-grandfather. He said he loves the Lord, his family and his many, many friends.

In his free time, he enjoys making baskets to share with family and friends. He also likes to pack shoe boxes for Operation Christmas Child.