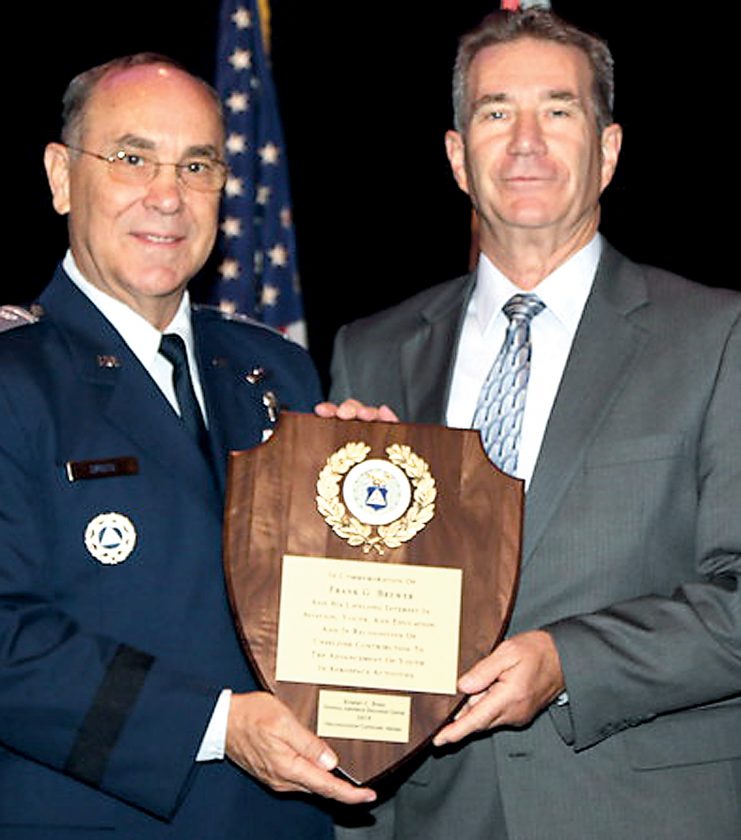 The CAP National Conference was attended by approximately 800 CAP members from throughout the United States and territories. This award is an exceptional honor for the Aviation Technology Program and for Pierpont Community and Technical College.

Frank G. Brewer Memorial Aerospace Award, established Dec. 31 1959, serve as a memorial to Frank G. Brewer Sr. and his lifelong interest in aviation, youth and education. Recognition is given to individuals and organizations that have made outstanding contributions, out of selfless devotion, to the advancement of youth in aerospace activities. Nominees are evaluated on CAP program support, significance of accomplishment, community involvement, and support of all facets of the aerospace education mission.

Mission of the Civil Air Patrol

The Center has strongly supported Aerospace Education within its programs as well as other agencies including the Civil Air Patrol. Beginning in 1992, in August 1998 the Center became available to organizations wishing to promote science, technology, engineering, and math (STEM) activities, especially relating to the aerospace industry.

The Center annually hosts the Harrison County science fair, social studies fair, the West Virginia Woodsman competition, and the LEGO Robotics competition. The Center makes its facilities available to local aerospace companies for them to provide specialized training for specific aircraft and/or aircraft systems. Over the past twenty years the center has hosted Federal Aviation Administration SateyTeam (FAST) training for local pilot clubs and flight school students and instructors.

In November 2017, The Center hosted the first ever West Virginia Wing Cadet Aerospace Education Weekend, with 29 cadets and 15 senior members participating. The event included presentations about the aviation industry, tours, displays, and hands-on activities. The center has on many occasions allowed the Civil Air Patrol and Experimental Aircraft Association to hold events by providing rooms, technical equipment, and instructors. The Center also has provided hangar space for maintenance of a Civil Air Patrol airplane and is always willing to open up its facility for aircraft storage or maintenance.