Barbour County Board of Education hears about Kasson Elementary/Middle School 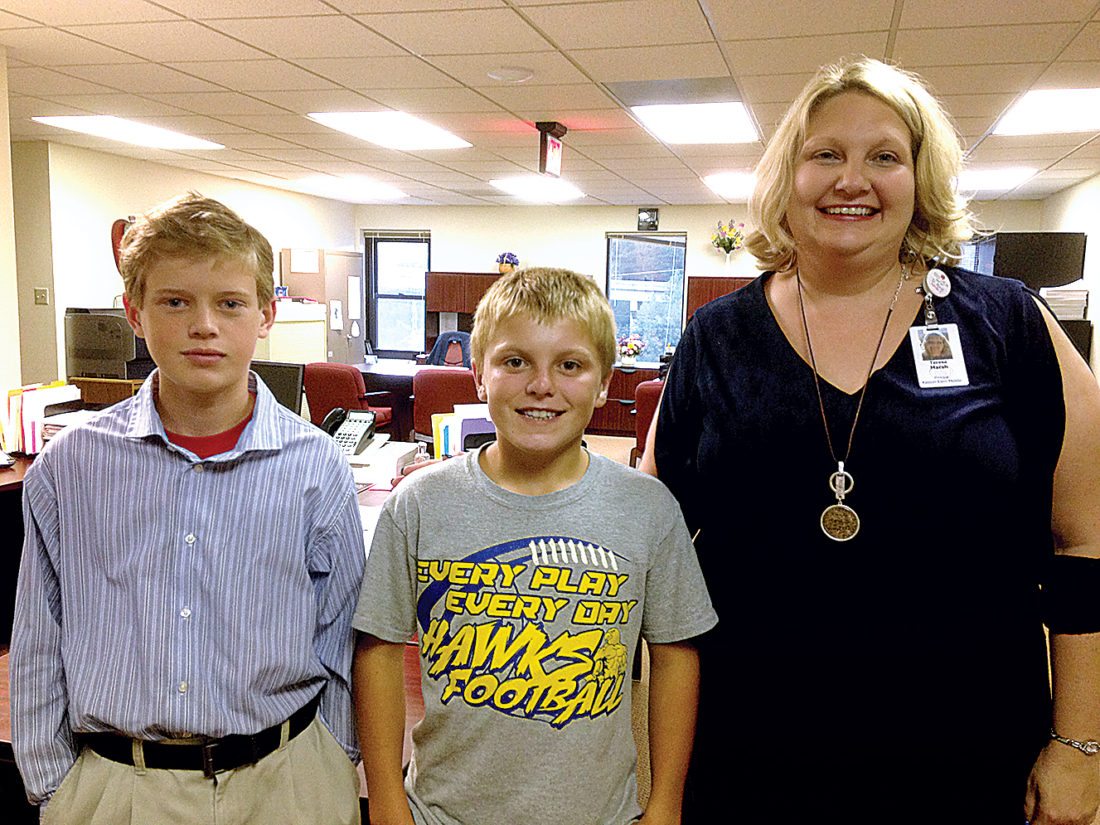 Dr. Teresa Marsh, principal of Kasson Elementary/Middle School, presented the 2016-2017 Local School Improvement Councils annual review to the Barbour County Board of Education Monday evening. Attending with her, from left, are Chandler Poling and Hunter Melvin, the developers of one of the school’s digital videos

Parents and students from Kasson were in attendance to hear the review that outlined by power point presentation the accomplishments of the school, the students, the faculty and the community.

Local School Improvement Councils are required by West Virginia Code and exist at each public school in the state. Membership of the LSIC is comprised of teachers, service personnel, bus drivers, parents, businesses and community representatives.

The LSIC is directly involved with the operation of the local school by reviewing discipline data and procedures annually through submitted written reviews and recommendations to the local school board. The LSIC acts as the liaison between the school community and school operations by meeting regularly and collaborating to create local initiatives for school improvements through strategic planning and innovative ideas.

Marsh said Kasson had nine grade groups scoring above the state average, compared to only three grade groups last year. She attributes this to a new tutoring program that uses morning bus room time for academics.

“Overall, 100 percent of the tutors improved grades from mid-term of the first nine weeks to the first nine weeks report card, and 100 percent are now reading at or above grade level,” she explained. “We also integrated school-wide literacy projects that helped bring these percentages up, such as ‘Books for Summer Reading’ to prevent summer learning loss.”

Marsh explained that much of the funding for programs that included literacy, academic competitions, field trips, sports and facility equipment came from grants written by the faculty and PTO volunteers.

“We received a Google grant for a field trip to Carnegie Center and a Healthy Kids grant to pay for new floor mats for the gym,” Marsh said. “Grant money from Good Sports and Whole Kids Foundation brought $2,000 toward our new garden project, and we received a donation from Arch Coal to purchase supplies for our new kindergarten.”

Another grant totaling $4,000 was awarded to the school from the J.J. Watt Foundation for new boys’ and girls’ basketball uniforms.

Kasson was also awarded a grant to participate in a two-year pilot program with The Clay Center Empowered Stories Program and Clay Center Mobile Lab that aids in the instruction of creating digital videos. Students Hunter Melvin and Chandler Poling were on hand to present their video to the Board on various types of coal and carbon-based fuels used in their community.

When asked by Boardmember Joanne McConnell as to what would be on the top of her wish list or needs list, Marsh did not hesitate to answer.

“An after-school tutoring program and doors for the gym,” Marsh said.

Board President Eric Ruf commented, “I am extremely impressed with the number of grants you have received. It’s a testament as to how hard your people have worked.”

∫ School bus driver Sherman Wilkinson said the Board needs to look into safety issues as they pertain to state law.  Clarification on misconduct reports and driver pre-trip inspections should be addressed sooner rather than later, he said.

“The state of West Virginia has a policy all school boards must adhere to for driver and student conduct,” Wilkinson noted. “There are procedures we must follow, and they aren’t being followed. Eventually this lax will lead to an accident that all of you will be responsible for.”

“Do we have to get to the point where students and drivers have to get hurt or even killed before we do something about it?” he asked the Board. “It’s only a matter of time.”

∫ Melissa Simmons, mother of two school-age children who ride Bus 32, brought to the Board a complaint concerning bus drivers and the matter of parents having to pick up their children when bus drivers refuse to work.

“From what I know — and the numbers are always changing — we have over 30 bus drivers to cover the routes,” Simmons told the Board. “Why is it up to the parents to take up the slack for lack of drivers?”

Simmons said substitute drivers refuse to cover routes due to personality conflicts and that, at times, full-time drivers do not give enough notice that they are not working.

“In the end,” she said, “we end up taking the brunt of it and why should we? We pay taxes to help pay for these school services.”

“This is a problem,” he told Simmons. “Finding new drivers is always on the top of our list, and we’re still posting for new candidates.”

∫ Superintendent Jeffrey Woofter, in his report to the Board, noted the A-F school ranking system rolls out to the public in November. Grades will be assigned to schools on a bell curve that will determine the grade each school receives based primarily on the General Summative Assessment proficiency rates for each school. He noted that all school principals are planning to attend a training seminar at RESA 7, conducted by Assistant State Superintendent Michelle Blatt later this month.

Dave Neff has been selected to fill the personnel/attendance director position and will be transitioning from Philippi Middle School once his replacement has been found.

“With the retirement of Glenn Sweet at the end of December,” Woofter told the Board, “we’ll be reducing the Central Office staff by one full position. That should help with expenditures with our dropping enrollment.”

Woofter acknowledged four principals who had recently graduated from the Principal’s Leadership Academy — Julie Bibey, Debra Conover, Mary Beth Hovatter and Marsh. Marsh was also named a Distinguished Scholar in the 2015-2016 class and was honored by Alderson Broaddus University with their Alumni Achievement award.