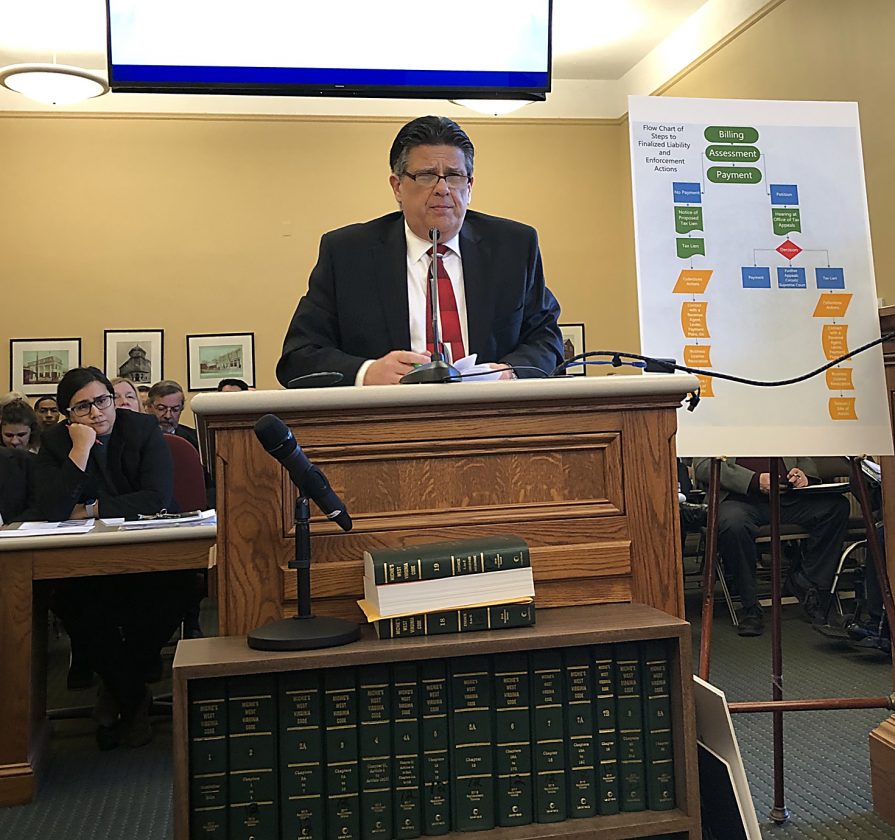 Photo by Steven Allen Adams Deputy Revenue Secretary Allen Prunty explains the process on how business certificates are revoked during a legislative meeting.

CHARLESTON — A legislative audit found that a division of the State Tax Department has not used its authority to suspend or revoke thousands of business certificates for noncompliance or that are no longer in business.

The Post Audit Subcommittee heard a report on the department’s Tax Division from the legislature’s Performance Evaluation and Research Division recently.

Auditor’s looked at a sample of 382 active business registration accounts out of 322,332 accounts for calendar year 2016. The sample size has a 5 percent margin of error.

PERD estimates there are over 90,000 accounts that show no evidence of conducting business. An estimated 87,000 active accounts do not have valid business certificates. The two segments combined make up 55 percent of the total account population. Of the non-compliant segment, 73 percent owe taxes to the state and 27 percent have not submitted tax returns in a year.

In 2010, the Legislature changed the law to make business certificates permanent unless the business has closed. Previously, businesses had to file renewal paperwork every two years. Even prior to the change in the law, 63 percent of businesses which did not renew their certificate during the two-year time frame were still doing business. One business hadn’t turned in a tax return since 2013 and was still doing business.

The division admitted to auditors that it has considerable obsolete information, but doesn’t believe it has the authority to revoke the certificates. A legal opinion from legislative lawyers said the division does have the authority.

“When we asked why it does not revoke or cancel certificates or registration when there is no evidence of business activity, the Tax Division responded that it can’t cancel business accounts simply because a business has not filed returns for successive year,” said John Sylvia, PERD director. “The Legislative Auditor considers this a disturbing response, because it indicates that the Tax Division feels it cannot revoke these certificates until companies inform them that they are no longer conducting business.”

Another issue is the division’s lack of enforcement when it comes to businesses not filing tax returns. Of the sampled businesses, 35 owed taxes between 2005 and 2018 totaling more than $1.5 million. The division sent letters and notices and issued liens in some cases, but revoked no business certificates.

Sylvia said the division is reluctant to initiate the 20-day revocation process, even after it sends letters and issues liens.

“All the other actions the agency took, the company just ignored,” Sylvia said. “The Tax Division stated ‘businesses that owe delinquent trust fund taxes are stealing from the State of West Virginia and this type of behavior must stop.’ The Legislative Auditor agrees with this statement but concludes that the division’s policies and practices with respect to trust fund taxes are inconsistent with this stated position.”

Allen Prunty, deputy secretary of the Department and Revenue, which oversees the State Tax Department, said the backlog is due to lack of staff. Since the audit process started, the division has eliminated 55,000 business entities that had not filed their certificates prior to 2010. They also created a task force in 2017 to start collecting back taxes from delinquent businesses. But he doesn’t believe it is the division’s role to kick businesses out of the system.

“They overstate the problem in our opinion,” Prunty said. “There is a problem and we’re working on it. They misstate the effectiveness, in our opinion, of revoking a business registration certificate, because it’s the first step in closing down a business. The tax department is not in the business of closing down businesses. The tax department is in the business of maximizing the tax revenue we can collect for the state.”

Prunty also took issue with the methodology of the audit report and the auditor’s decision to use a small sample of businesses. Sylvia defended the decision.

“This is a statistically significant random sample,” Sylvia said. “It’s common for surveys to be done on American voters that are represent millions of people on sample of 1,000. This is representing only 322,000 or so accounts.”

Committee members asked Prunty to develop solutions to the backlog in businesses no longer doing business in the state, as well as develop ways to collect tax revenue owed to the state.

“At the end of the day, we want those doing business in the state that are taxpayers to be paying their taxes on time, and that’s it,” said Delegate Eric Nelson, R-Kanawha.