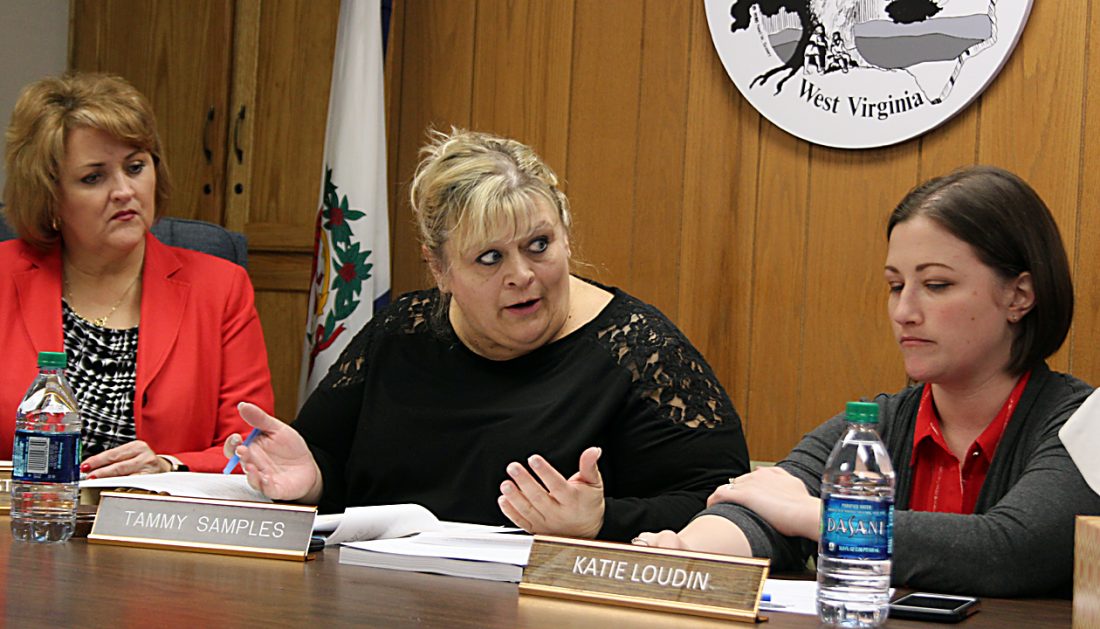 The Inter-Mountain photo by Amanda Hayes Upshur County Board of Education President Dr. Tammy Samples, center, discusses SB 451 at Tuesday’s special meeting. At left, is superintendent Dr. Sara Stankus, and at right, is board of education vice president Katie Loudin. All five board members passed a resolution opposing the bill which is expected to be taken up by the House of Delegates education committee today.

BUCKHANNON — Upshur County Board of Education members formally voiced their opposition to Senate Bill 451 in a special meeting held Tuesday.

The ordinance further states that “taxation and policy decisions which result in reduced revenues for public education and/or have a negative impact on our students and families must be avoided.”

The House Education Committee is expected to take up the bill today.

Holding up the 144-page print out of the bill, board president Dr. Tammy Samples said, “There are 29 big ideas in the bill, many of which could be considered a good thing, many of which are concerning to multiple stakeholders. Many school boards have met and discussed and came forth with a resolution in opposition to this.”

Samples also noted the state board of president opposes it, as does state superintendent of schools Dr. Steven Paine.

“Dr. Paine said our state education leaders haven’t had the opportunity to give input into this monumental bill and it is absolutely necessary to have those frank discussions and debate with individuals inside our schools,” she said.

Board member Dr. Greenbrier Almond said that “anything that gets too complex, there is going to be something overlooked. This is a 60-day session and they have used about one-third of it.

“This could be taken apart and addressed, each item, and they still have time to do that. I always think prudence is on the side of full discussion. Vote on the ones that are easy and keep talking about the ones they have to polish until they get it right. I’m glad I’m not sitting in their chair.”

Board member Alan Suder said he agreed with the other speakers.

“I just don’t feel that this bill is in the best interest of our school system,” he said. “Even though I was reluctant to take a stand because I really didn’t feel it was our place, as fast as it moved through the senate, it’s time to stand up and let our voice be heard.”

Board member Kristi Wilkerson said she agreed with the state board of education stance on the bill.

In the final version which passed the state senate, there was an amendment that did not increase the number of students in grades 1-6 classrooms as the original bill had planned.

This was something that Wilkerson said she was glad was not in the final bill.

“That was very concerning to me and anyone who thought that was a good idea to put it in in the first place, really just blew my mind,” she said. “Those are young children who need more one on one attention and to even be considering that was a huge concern of mine.

“The other fact is we have in this county so many students of different backgrounds and different needs. We have a huge problem that we are facing with foster care, opioids, addiction and so on. This bill looks like it may take away money from those students in this county who really need our school system and need our teachers. That’s where my largest concern is.

“The other side of this is that our teacher’s pay raises are attached to this bill. Our teachers deserve and they need that pay raise, but there are so many controversial parts of this bill that I find it unfair that everything is tied to that pay raise. This bill frankly is not sitting well with me, nor the process in which it has been handled.”

Board vice president Katie Loudin said she had seen a lot of comment about the ability of boards of education in the proposed bill to raise property tax rates.

“I think to put that kind of responsibility in five people’s hands is irresponsible,” she said. “That should always be up to the voting populace.”

Loudin moved to approve the resolution, which was seconded by Wilkerson and passed.

Ann Osburn, president of the Upshur County WVEA chapter, commended the board of education for passing the resolution following the meeting.

“We are very excited and happy that they did that because it shows they stand behind us and support us,” she said.

The WVEA is opposed to the SB 451 for several reasons.

Loss of funding will have a trickle down affect that will affect personnel from fewer teachers, aides and bus drivers being needed.

“It could affect the whole realm of education,” she said. “The savings accounts they want to come up with where people will be able to receive money for homeschooling their children also gives us some concern.

“Will that money actually go to homeschooling children or will it be used in other ways?” she asked. “You would hope not, but it could.”

WVEA members voted Tuesday on whether or not they would take action as a county. The results of that vote will not be made public until all the WVEA chapter presidents come together Saturday and a public statement will be released, according to Osburn.

AFT-WV, WVSSPA and WVEA local presidents are conducting authorization votes in all 55 counties this week and will bring the results to a meeting on Saturday for tabulation, according to an AFT-West Virginia Facebook post.

Superintendent Dr. Sara Stankus also released a statement: “We are facing challenging times in public education. Shortages in classroom teachers, service personnel, nurses, counselors and support staff all reflect the need for qualified personnel. We all have the same goals to provide academic preparation; instill social responsibility; provide skills for our students to be productively employed; and pursue higher education. We want our students to have a desire for life-long learning. Our hope is that the politicians who represent the citizens of our great state will make decisions that reflect the value of education and recognize the hard work of our public-school employees.”