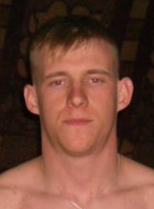 CLARKSBURG — The West Virginia State Police are looking for a man last seen in Elkins who is facing a first-degree murder charge and failed to appear for a court hearing.

Troopers said they are searching for Christopher Shawver Dotson, 34, who was last seen in Elkins but has ties to Braxton County.