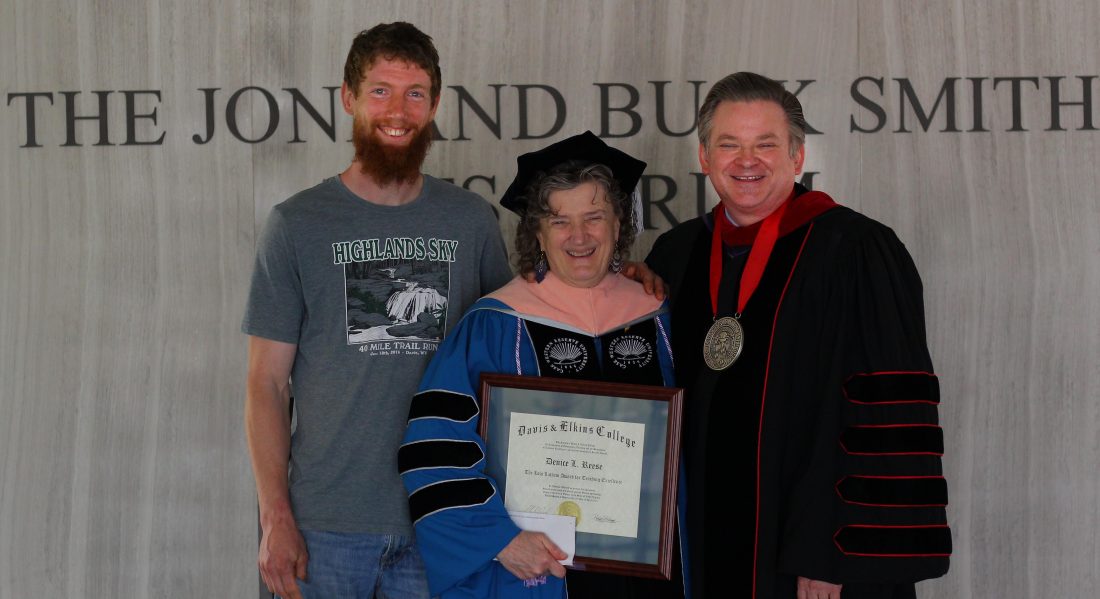 ELKINS — Davis & Elkins College Professor of Nursing Dr. Denice Reese was honored Thursday with the College’s top faculty recognition, the Lois Latham Award for Teaching Excellence. The award, along with more than 60 others, was presented during the annual Academic Awards and Recognition Convocation in Myles Center for the Arts Harper-McNeeley Auditorium.

The Lois Latham Award is presented annually to an outstanding D&E educator who is characterized by their distinguished intellectual career; enthusiasm for scholarship and intellectual curiosity; and, most importantly, by evidence that it is their professional calling to nurture the intellectual and personal growth of others. Nominations for the award are submitted by faculty, staff and students.

“What an honor and delight to receive the Lois Latham award,” Reese said. “Davis & Elkins puts undergraduate teaching and advising at the top of its faculty priorities. Increasing students’ knowledge, improving their critical thinking skills, and building their capacity and confidence to successfully step into lives and careers of heartfelt caring are worthy and rewarding ways to serve. I thank my colleagues for selecting me to join the ranks of winners of this award and my students for being my inspiration every day.”

A resident of Tucker County, Reese has been a member of the D&E faculty since 2004. She instructs pediatric nursing, disruptions in health and mental health, nursing school success strategies and pharmacology, and is a Certified Health Simulation Educator. She earned her Doctor of Nursing Practice from Case Western Reserve University in Cleveland and received the Director’s Award for Outstanding DNP Graduate. She also holds a Master of Science in nursing, Bachelor of Science in nursing and Bachelor of Arts in biology from Case Western Reserve University.

The Academic Awards and Recognition Convocation also recognized students’ academic achievement in each academic program as well as leadership on campus.

Selected for the Junior Marshal Awards were Julia Hancock of Monroeville, Pennsylvania, and Samantha Kirk of Harrisville.

The Faculty Senior Award was presented to MacKinzie Smith of Renick.

Departmental Achievement Awards presented during the ceremony were:

An organization and a staff member each received the Campus Impact Award, an honor that recognizes good works that have made the campus a better place. The International Student Organization was selected based on multiple accomplishments including the weekly Cultures, Caffeine and Conversation, events at The Icehouse, inaugural Multicultural Event, and the Elkins-Randolph County Chamber of Commerce After Hours, among others.

Interim Director of Student Recruitment and Success Angie Scott also was chosen for the Campus Impact Award for her efforts in recruitment and retention of students.

The annual Algernon Sydney Sullivan Awards that recognize a senior male and female who exemplify love of and service to humankind were presented to Kelsie Roby of Petersburg and Kyle Seago.

Students also were recognized for inclusion on the fall president’s list and dean’s list, and membership in honorary fraternities.