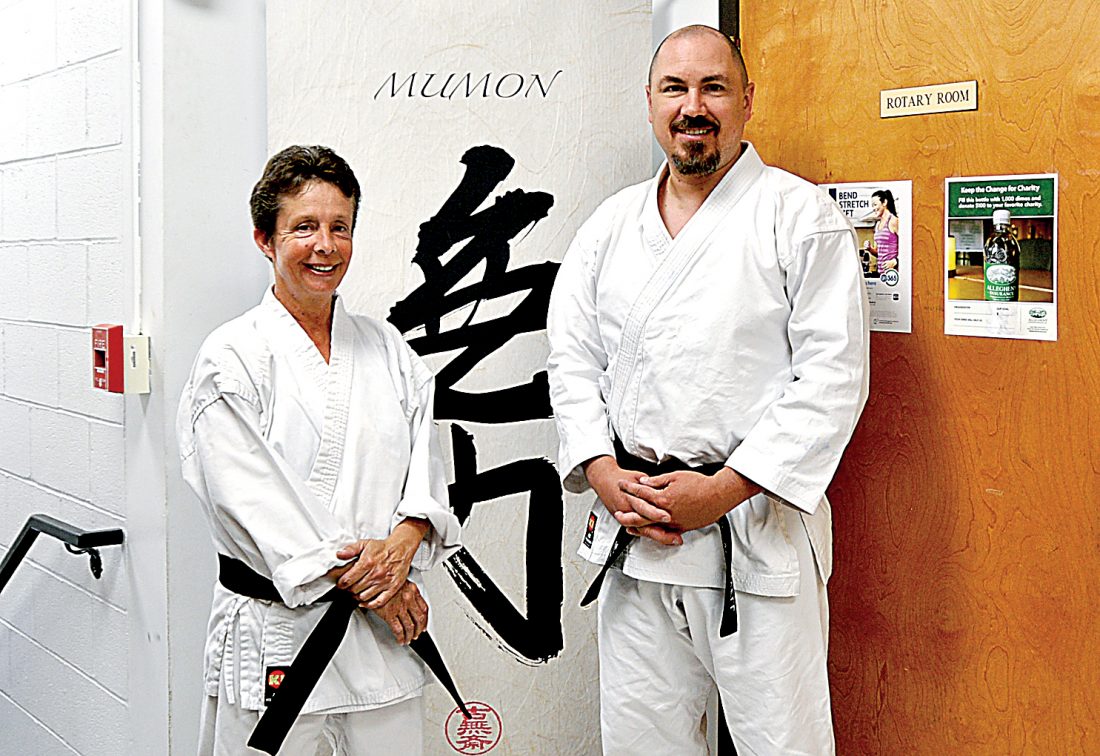 The Inter-Mountain photo by Eliana McCutcheon Student Mechele Dilks and instructor Ken Maxwell pose for a photo before beginning their biweekly karate class.

ELKINS — Many boys and girls are learning martial arts through Shotokan Karate in Elkins, but a grown woman has not only learned the basics of self-defense through the program, but recently achieved a first degree black belt in karate.

Student Mechele Dilks, of Elkins, achieved the rank of Shodan first degree black belt May 18 in Pittsburgh, Pennsylvania at the annual Mumon Karate Spring Festival. Dilks trains at Shotokan Karate of Elkins. She first discovered her passion for karate when she was young.

“I used to watch TV and it was in black and white. I always loved when they had martial arts on. My brothers and I would sit at the TV completely engrossed in it. So I think way back then my interest and passion for karate started,” Dilks said.

Mechele began karate when she first moved to Elkins from New Jersey.

“I found out that the YMCA offered martial arts, and I decided to start taking classes to occupy my mind and hands. From there, I continued to progress,” she said. “Martial arts has helped me out with a lot of things outside of class. We don’t keep our progression in the dojo, we carry it out and make it a lifestyle. It helps us to be more productive citizens.”

As time went by, her admiration for the martial arts turned into a deeper passion and even six years later, she is still mesmerized by karate and all that is has given her.

“I’ve gained a lot of self confidence. My dad used to tell me that I never looked people in the eye. That’s the biggest thing in martial arts, we have to look at ourselves honestly. Today, I can now look at people and have a conversation,” says Dilks.

Now that Dilks has achieved her goal of the black belt, she hopes to become even more active and involved in karate.

“It’s a non-stop process. I plan to do it until the day I die,” she said. “From what I hear, we begin again at the black belt. It’s like being a white belt all over again. It helps me better myself, so why would I stop?”

Shotokan Karate of Elkins teaches traditional Shotokan Karate to the community. Not only does it offer instruction in basic physical and mental discipline, but also self-defense and enlightenment. Shotokan Karate chooses to focus on the martial art rather than focusing on practicing competitively or for combat. This form of martial arts is considered beneficial for all ages.

Ken Maxwell, instructor of Shotokan Karate of Elkins, has been active in karate since he was a young boy.

“I’ve always liked the technique of karate. I think as a kid, everyone gets into it to learn how to fight or defend themselves, but usually the students by the time they progress, their mentality matures,” he said. “The pure essence of karate is to learn how not to fight and how to be able to get out of the situation before it escalates to fighting.”

“Perseverance. It takes a lot of time and practice to earn a black belt. The biggest thing is to just not quit. The training comes, that’s what you get in class. It takes different people a different amount of time. Some have gotten it in 5 or 6 years, some take 10 years, and for some it might take a lifetime. The black belt symbolizes a commitment and also dedication and practice.” explained Maxwell. “There is a lot of physical endurance that comes with the practice. Most of our practices get really physically intense, so you have to push yourself.”

The Shotokan Karate of Elkins practices Budo, which takes internal perseverance. It is the ability to put your mind to something and to be able to push past the obstacles. With Budo Karate, one trains for fulfillment of self. Not only is it self-defense training, but also it teaches more about life, how to apply oneself, and how to persevere.

This karate dojo is apart of Mumon Karate, which is the organization that gives them their rank. Sadaharu Honda, 80-year-old master of Shotokan Karate, is the founder of the Mumon Karate organization. His rank is Godan, fifth degree black belt, and he is known as the groups Shihan, which means chief instructor. He inspires his students in Elkins to keep going no matter the circumstances, even age.

There are different levels one must aim to master during their journey in karate. A beginning student is classified as pre-kyu. There are eight kyu levels. After that, there are five dan ranks: Shodan, Nidan, Sandan, Yodan, and Godan. There is up to a fifth degree black belt.

The members of Shotokan Karate of Elkins travel and participate in many different events.