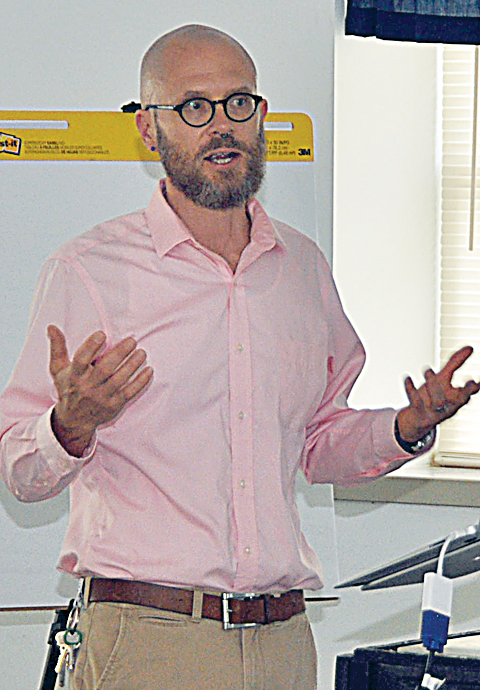 “What you have before you is actually the fifth ordinance that we have looked at as a commission,” Commission President Mark Scott told the residents who gathered at the Coalton Volunteer Fire Department. “This ordinance came from an ordinance adopted by Gilmer County.

“The other ordinances that we looked at, we were concerned because they were so restrictive,” he said. “… We’re not trying to do that. The purpose of this ordinance is to take care of those unsafe structures, unsafe situations. So it’s not going to regulate the height of grass in a person’s yard. That’s not what this is about. So we were very careful that we chose (an ordinance) that matched our rural community.”

Sutton Stokes, a consultant to the commission who ran Wednesday’s meeting, pointed out that the proposed ordinance is not about zoning, and will not adopt a building code, or require building permits or impose design guidelines. The goal of the ordinance is to create a procedure for receiving, evaluating and acting on complaints about unsafe buildings and properties in the county.

The commission offered a meeting on the proposed ordinance in Harman last week, and a third meeting is set for 6 p.m.. June 24 at the Mill Creek Community Center. A fourth meeting, in the Montrose area, has yet to be scheduled.

“Once these four meetings are done, the loose goal is for the commission to take this up in July,” Stokes said. The commission must vote on the proposed ordinance at two separate meetings for it to be approved.

Coalton resident Rick George, a former Randolph County magistrate, asked, “This ordinance, will it give you the authority to go anywhere in the county to enforce this, or will you have to stay out of the towns that are incorporated?”

Scott replied, “An incorporated town has the option to include us or not. We’re not going to go anywhere unless we’re invited … it has to be voted on by the (town) council and they have to invite us to come in and enforce it. Otherwise we don’t.”

Stokes said the ordinance would create a new county governmental body, an Enforcement Agency. This body would consist of an engineer, who would be a volunteer; the county’s health officer; a Randolph County volunteer fire department chief; a litter control officer; two at-large members, who will be unpaid volunteers appointed to two-year terms; and the Randolph County sheriff. The Enforcement Agency will hold public meetings, he added.

“What we’re going to do is ask for voluntary cooperation from homeowners,” Scott said. “So if someone owns a distressed property, we’re going to ask them to allow us … If they do not, then we do have the ability through the circuit court to obtain a search warrant to go on that property. So to protect the citizens’ rights, if they don’t volunteer for us to go, we can’t just go on their property. We have to have a court that says, ‘There is an unsafe situation and we will allow you to go with a deputy onto that property to take a look at it.'”

Stokes pointed out that, under the ordinance, there would be penalties for noncompliance with an order to clean up an unsafe property.

“The order goes out, there’s a deadline. If that deadline passes without compliance, the commission can then start imposing a $100 fine per day,” he said.

“I think it’s important to note it’s up to $100 a day, so there could be a situation where we would fine someone less,” Scott said. “For example, if they can’t afford it, they’re a senior citizen…

“If someone can’t afford, then we will come and help them if they will allow us. They sign a waiver, and we’ll have a rapid response team come and do the clean-up free of charge,” he said.

“This is not penalizing. This is about remediation. We want to fix it.”

Some residents pointed out that the Coalton area is a rural part of the county, with several farms. Scott said the ordinance is not directed toward farms but rather unsafe structures.