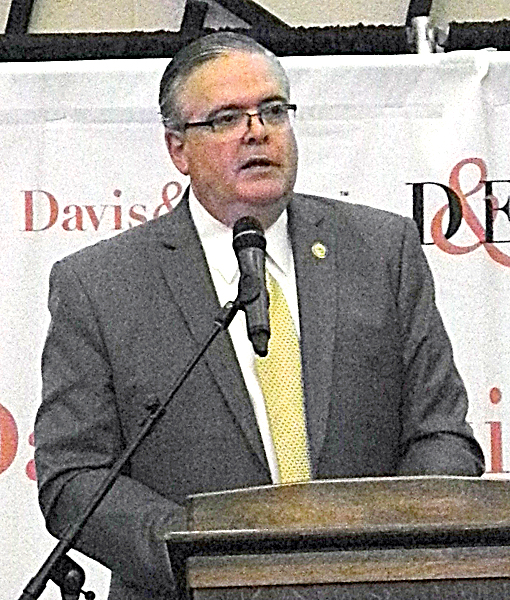 Queen spoke on behalf of Secretary of State Mac Warner, absent due to recent knee surgery.

He congratulated the attendees for being selected to take part in the prestigious event.

“Those of you attending Girls State today will become leaders throughout West Virginia for decades to come. In this room, are future city council members, mayors, school board officers, county officials, judges, future legislators. The first female to serve as West Virginia governor may be right here in this room,” said Queen, prompting applause from the attendees.

He spoke about the duties and responsibilities of the Secretary of State.

“It’s an incredible opportunity to elect local officials that really probably have the most impact on our lives — our parks, our sidewalks, our roads — the type of culture and music activities we have in our neighborhoods, in our cities, in our counties. The Secretary of State’s Office will have a representative to check each one of those municipalities. There’s a check-off sheet to make sure that everything is set off properly — that if we can ensure that elections are fair, safe and secure, we’ll be able to continue to encourage people to vote.”

As noted by Queen, West Virginia has a unique history in terms of voter’s registration.

“Jennings Randolph, our United States senator, was the author of the 26 Amendment, which reduced the voting age from 21 to 18,” he said. “What most people don’t know is that in 1942, at the height of World War II, President Roosevelt needed more soldiers for the war effort. Because in 1942, they couldn’t draft young men into the army to fight until they were 21. […] On Nov. 11, 1942, President Roosevelt released an executive order reducing the draft age from 21 to 18.

Officially introduced in 1943, the 26th Amendment was not ratified until 1971, during the height of the Vietnam War. Living in Elkins later in 1971, Jennings Randolph was on the campus of Davis & Elkins when he received a call from the White House, asking him to choose the first 18-year-old to become a registered voter in the United States.

“Senator Randolph walked in the administrative office building at Davis & Elkins College, and went up to a young lady who was a work study student.” Without asking her name, Randolph asked, “Young lady, how old are you,” to which she replied that she was 18. He then asked her, “How would you like to be the first 18-year-old in America to vote?” “Absolutely yes,” she said.

“What Senator Randolph couldn’t know at the time was that that young woman, Ella Mae Thompson — now Ella Mae Thompson-Haddix — had a brother who was drafted into the United States Army at the age of 18 — who was killed in combat two weeks before he was supposed to return home. She marched over to the Randolph County Clerks’s Office and became the first 18-year-old, male or female, to register to vote,” said Queen.

Queen then went on to discuss the Jennings Randolph Award, which is presented to high schools with 100 percent voter registration among eligible students.

Queen also spoke about the Secretary of State’s role as the chief business officer for West Virginia.

“We want to make sure that everybody doing business here in West Virginia is properly licensed and registered to do so, so that they can pay their fair share of taxes. If they’re registered with us, they’re paying taxes,” said Queen. In order to fulfill the responsibility the state has for consumer production, the office is releasing an app later in the year.

“Those of you who have been in flood-ravaged areas or communities that have been devastated by some kind of natural disaster know what I’m talking about when I say that when there’s a lot of disaster and a lot of damage, contractors show up from all around. They want to help — most of them — but there are some who are con-men, con-women who are there just to take your money.”

Queen emphasized that knowing the difference will become much easier when the app launches later this year.

“When that contractor shows up at your house saying that he can replace all your windows, you’ll be able to pull up your Secretary of State app on your phone and type in the company name, and if they’re not registered to do business in West Virginia, you should not give them any money whatsoever,” he said.

The app will also include the registered list of charities and non-profits.

A graduate of Marshall University, Queen’s political career began with an appointment from the WVU Board of Regents in 1984, and he was later selected to represent Harrison County in the state House of Delegates in 1988.

Queen served in various political, regional and statewide positions that promoted the expansion and development of vocational and technical education in West Virginia high schools from 1990 to 2006. From 2006 to 2014, he served as a member and president of the Harrison County Board of Education. During the last 30 years, Queen has consulted on more than 200 local, state and federal political campaigns.