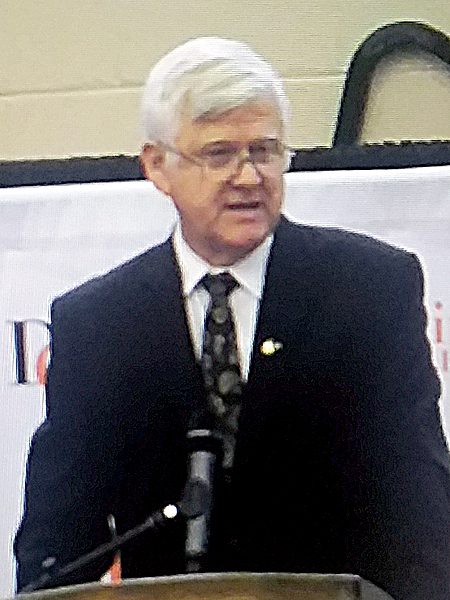 Elected to the position in 1996, Perdue is currently serving his sixth term in office, making him the state’s longest-serving treasurer. Perdue’s speech emphasized the valuable nature of higher learning for West Virginia students.

He recounted the way that the opportunity to attend college opened doors for him throughout his career.

After his brother received a full-ride scholarship to attend college, Perdue’s family began to consider what his future had in store.

“My dad said, ‘Son, you’re too tall for the mines — 6-foot-6. Maybe you should follow your brother onto higher education,'” recalled Perdue.

After deciding to follow in his brother’s footsteps, Perdue enrolled at West Virginia University, referring to it as “the best decision (he) ever made in (his) life.”

Perdue then acknowledged higher education in all its forms, emphasizing that any one of them can pave the way for the future.

“Education is what is going to open up the doors of opportunity for you in your lifetime. It doesn’t necessarily have to be higher education; it can be community college; it can be trade school; it can be a technical education. There are many different types of education, but I want to tell you today that if you want to be successful in life, you will have to have some kind of education to be able to open up those doors of opportunity for you,” said Perdue.

Perdue elaborated that is important that the Girls State participants to consider their futures now.

He said that the role of Girls State is an important part of the participants lives.

“It’s opening up the doors of your eyes on what this world is all about. We live in a world that has problems; we live in a state that has problems, he said. “The most important thing is you being able to see what governments are like, what leadership is all about because you are the future leaders of this great state. So, it’s very important that you realize that while you’re here.”

Perdue stated he believes education is one thing that will bring improvements to West Virginia.