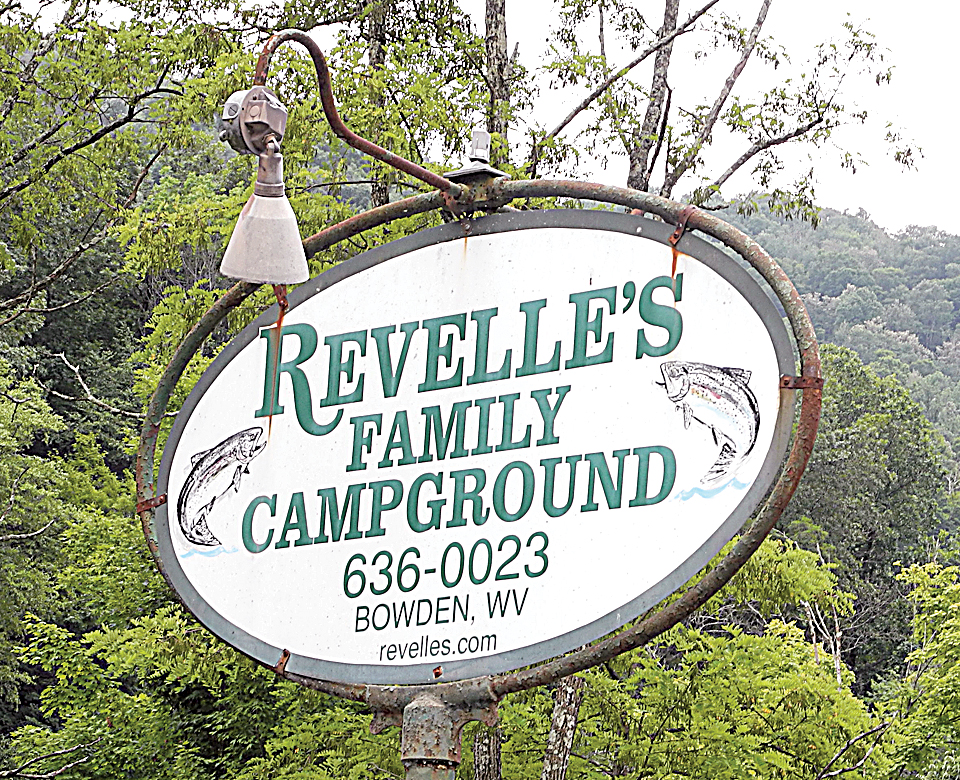 Submitted photo The original Revelle’s Family Campground sign was mounted in 1969 and still hangs as a reminder of the campground’s dedication to maintaining a family atmosphere.

BOWDEN — A local campground is set to celebrate its 50th anniversary in August.

Revelle’s River Resort was founded in 1969 by Hansel and Mildred Bazzle and their son, Jim.

In a recent interview with The Inter-Mountain, Jim Bazzle chronicled the history of the land on which the campground was built.

“My great aunt and uncle settled here in 1906. They were farmers,” said Bazzle.

He also said the campground began to accommodate the trout fishing on the land.

“Trout fishing started on April 1, and people were really excited about the first day of trout season. They would come out and park along a little dirt road, and they would cross our fences because they wanted to get to that river. That really is what caused us to start the campground; it was just the demand,” said Bazzle. “We had other farms. So, we just moved our farming operation elsewhere and started the development.”

Bazzle cited the flood of 1985 as being one of the most notable things to happen to the campground and the area as a whole.

“That flood devastated everything along this river. It caused us to have serious thought about rebuilding because it really was devastating,” he said. “Fortunately, we did have some insurance, and we had a lot of friends who were campers here, and they helped rebuild it.”

Another memorable aspect of the campground’s history was the Rivercar Restaurant, which burned down in 1996.

“We, as a family, developed a personal relationship with a lot of the people who came here, and those relationships went on for years,” said Bazzle.

Bazzle noted that the primary change in the campground is the growth it’s experienced since its inception.

Bazzle also noted that Revelle’s has stayed the same in its mission to maintain a family-friendly camping environment.

“The original name was Revelle’s Family Campground because we really wanted to promote families coming here, and that was really the core of the business’ growth, along with trout fishing in the stream.”

“We definitely still encourage the family. We encourage kids and bikes,” said Catherine Bennett, the current owner of Revelle’s.

Bazzle said the name changed due to the increase in amenities offered at the campground.

“We started to offer other components than just camping,” said Bazzle. “The name changed to reflect more of a complete operation.”

“A huge number of people have passed through these doors over 50 years. A lot of them return, and we have generations now. We now have the grandchildren of the families that we started with in 1969,” said Bazzle.

Revelle’s will hold its 50 Year Celebration on Aug. 17 beginning at 12 p.m. at the lower splash pad pavilion, and light refreshments will be served.

“I just want people to come and reminisce. I would love to get some folks to bring their pictures and memories. It’s been around a long time, and it’s still very successful,” said Bennett.