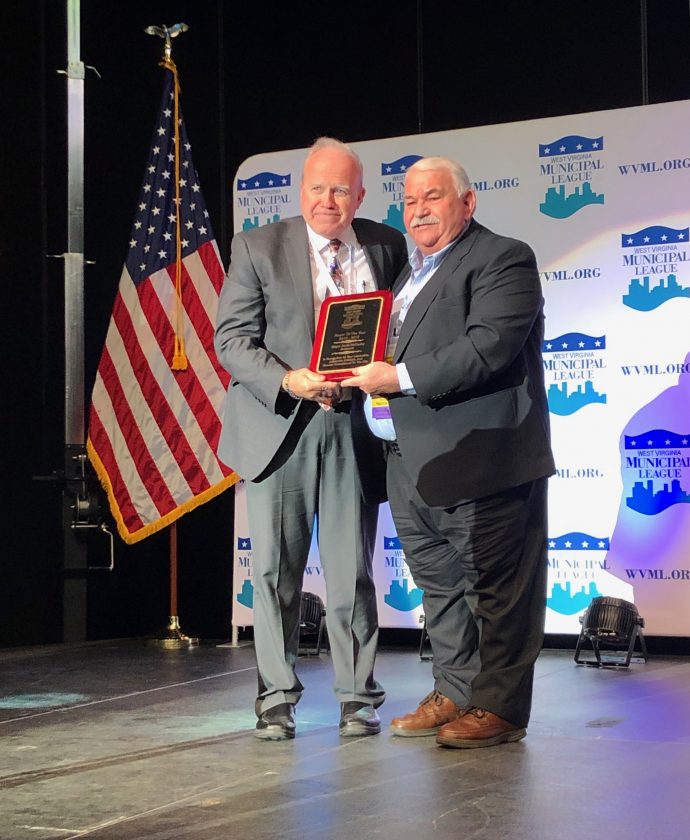 BUCKHANNON — “We’re all in this together” is a phrase that Buckhannon Mayor David McCauley often uses.

And when it comes to McCauley receiving the West Virginia Municipal League’s Mayor of the Year Award – he says the award belongs to Buckhannon and the people who have helped shape the city over the years.

“The most important thing I can say about this honor is it is about our place,” he said. “It’s got very little to do with me. It’s about Buckhannon and when I say it’s about the people of Buckhannon, a lot of those people were here a long time ago.”

And McCauley said director of finance and administration Amby Jenkins and director of public works Jerry Arnold as well as others have put as much or more into trying to make Buckhannon the best place it can be.

“We tend to take on a little bit of those personas that have influenced us,” he said. “These people on my wall are my influences.”

“It’s amazing what they have done in a short period of time to turn that town around,” McCauley said.

The award was presented during a luncheon Thursday by Terry Williams, in his 38th year as mayor of Spencer.

“I’ve been to a number of these events going on 37 years including the last four because I have been on the Municipal League board,” McCauley said.

But this time McCauley would be in for a surprise.

Terry Williams started out with some jokes and then said the person who was being honored had been in city government for nearly 40 years.

He went on to reference closeness with veterans, work for the youth and that the “the crazy guy even bought an old theater,” according to McCauley.

“My heart just starts beating hard,” he said. “By the time he got into Traders Alley, Stockert Youth, Jawbone Park and the river trail, I knew it was me. It was quite an honor.”

McCauley said there are a number of great people associated with the WVML and the conference also included a touching tribute to Liza Dooley who stepped down as Municipal League executive director July 1 after 29 years.

“It was one of those not a dry eye in the house moments,” McCauley said.

McCauley said some of the highlights mentioned by Williams for McCauley such as the river trail speak to the work that has been ongoing for a long time.

“I’ve always been a part of the river trail going all the way back to the 90s when Pat Long and others started that project,” he said.

“Stockert is probably my most long-term closest project I have worked on. Sixteen years ago, after the county had operated Stockert for 10 years, they were going to close it up. I begged and pleaded to the council to let me intervene, go to the county and buy some time that if they would keep it afloat for the next year the city would assume ownership and operation of it.

“I think of anything I have done, that is the single thing I have ownership of that I guess I am proudest of,” he said. “Anything about the kids is worth fighting for.”

These days, McCauley is championing the fundraising efforts of SYCC — so far about $310,000 has been raised — to build a multi-purpose gym.

“The community will succeed because they have been very generous,” he said.

Just a couple hundred steps down Main Street from SYCC — and signs will soon reflect that distance — is the Colonial Theatre that is under renovation.

“The theater is a big deal,” McCauley said. “Not everybody plays sports – some folks like athletics, some are more arts oriented. Again, it’s another component for that segment of our community including kids – many of which will just walk up the street from Stockert. The point is it is only a couple hundred steps apart to the two facilities which are both largely about our kids.”

Across from the Colonial Theatre is the entrance to Traders Alley.

While those are visible projects, McCauley pointed to other efforts underway in Buckhannon such as the fire and police department accreditation process, the work of the planning commission which just presented the Buckhannon 2025 plan and the stabilization of finances of all the utility boards.

“I was offered the job to be the new city attorney by Bob Wallace at a luncheon attended by J.D. Hinkle Jr. in March 1983 at the Bicentennial,” McCauley said. “I accepted on the spot.”

Still, McCauley thought he would be in Buckhannon for a year or so and always intended to return to his roots in the Wheeling area.

“Three months after I had leased the house that Bob had picked out for me, I bought it and the rest is history,” he said. Going on 37 years later, I’m still here. This is home.”

Jenkins emailed news of the honor Thursday afternoon and said she was very happy and proud of McCauley.

She feels McCauley was deserving of the award because of his work on the Colonial Theatre project, making larger strides with the SYCC capital campaign, focus on the arts and making the community more inclusive.

“He wants everyone to be a part of this organization,” he said.

One of the first things McCauley did after assuming the role of mayor was to remove a platform in council chambers that had the council members sitting higher than everyone else in the room.

“When he took the platform down that was in city council chambers and brought everyone down to the same level – that was symbolic that we are all doing this together,” she said. “It’s not just me. It’s not just council. We are all part of this. You are equal in this organization.”

“I think more proclamations have been written in his term than in the entire life of the city,” she said.

But Jenkins said there is a change in the city too.

“If you think about what has happened in West Virginia with the loss of one of the main industries, coal, towns need to reinvent themselves to stay vital,” she said. “He’s allowing everyone to be a part of that and it makes a stronger community.”

McCauley added, “Buckhannon is a special place and this recognition is about this special place. I can’t think the Municipal League enough for recognizing it and I’m very thankful to the collaborators who nominated me.”