Stokes traveled in tropics and polar regions in Coast Guard 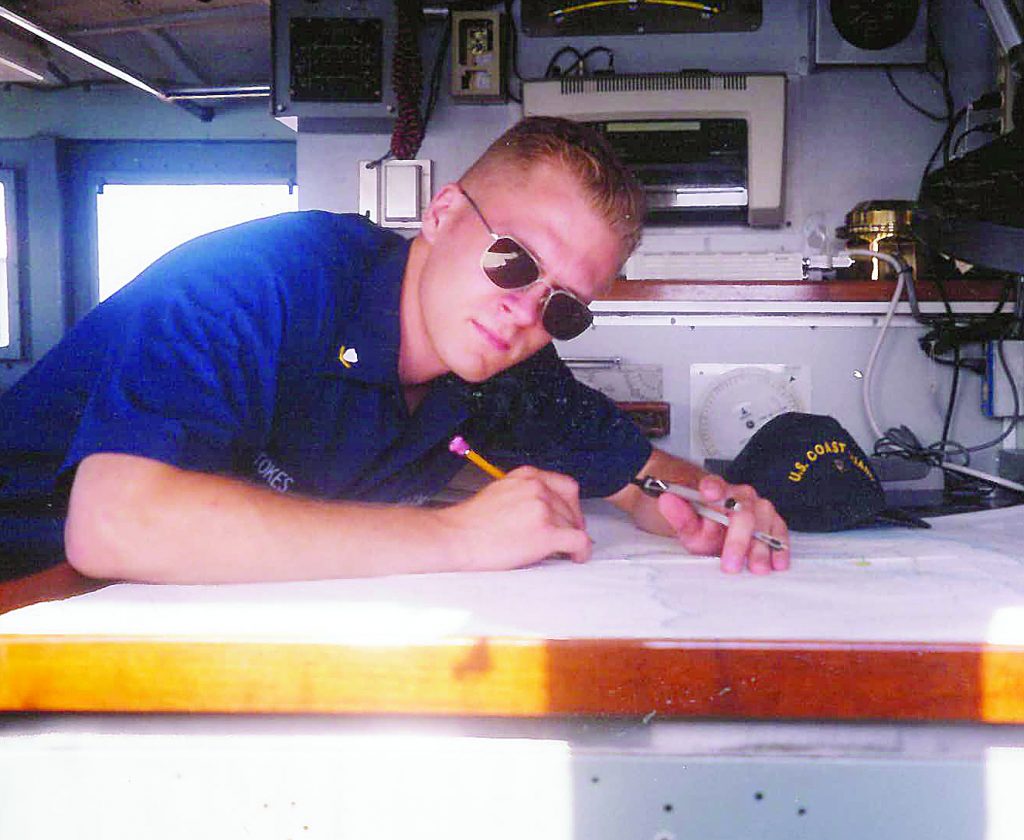 Submitted photo Sutton Stokes sits at the chart table on the bridge of the U.S. Coast Guard cutter Baranof.

ELKINS — Life can pass in an instant, and some decisions can have life-altering impacts.

While attending the University of Maryland, Sutton Stokes, a former city clerk of Elkins, decided that he wanted to do more with his life.

“I was halfway through college at the time and I was feeling frustrated by not being able to get out into the world and do things,” he said. “At the same time that I enlisted, I had a strong interest in law enforcement. In fact, I was about to transfer into a school to study criminology.

“In the summer, life happened, I had a break-up with a longtime girlfriend, and I had known a security guard at my college who was in the Coast Guard. So, all of these things kind of came together and I went to a recruiter and ended up signing up.”

Stokes was able to travel in the tropics as well as in polar regions during his time in the service. He also went to navigator school and specialized as a Quartermaster. The rating of Quartermaster no longer exists in the Coast Guard, but has been renamed as “operations specialist.”

“My first duty station was on the U.S. Coast Guard cutter Midgett,” Stokes said. “That was a 378-foot high endurance cutter, meaning it could go out to sea for a long period of time, that was based in Seattle and it alternated between patrolling around Hawaii and patrolling the Bering Sea. So, I actually joined it in Samoa, they flew me out to Samoa, and then I rode back. That was the end of the tropical phase.

“The whole time that I was on, we then did Bering Sea and Alaska patrols. My second unit was the U.S. Coast Guard cutter Baranof. That was based out of Miami and it was a 110-foot patrol boat, which was meant to go out and maybe spend three days at a time out there.

“In between the two units, I went to navigator school,” he said.

Stokes said there are many tasks that are involved in being in the Coast Guard.

“You enlist in the Coast Guard like any other branch of the military,” he said. “I am not sure how the different requirements stack up but the process would essentially be the same. The Coast Guard alone among the five armed forces in the U.S. has this sort of civilian facing, peace time, domestic set of missions. No other branches can actually do law enforcement with civilians, but the Coast Guard has that mission for boating safety, drug interdiction, and illegal immigration.

“In addition to that they enforce laws about environmental protection. They do all of that, but they still have a national defense component of their mission. I would say that one of the cool things about the Coast Guard is the you serve around the U.S., although you definitely can go overseas, but it has that peace-time, civilian-facing mission that I found really appealing.”

Stokes shared some of his favorite and unique memories that stood out the most during his service.

“The most unusual thing that I was involved with was when I was on the Miami patrol boat. We were on patrol, in the vicinity of Puerto Rico, and we would often do vessel boarding at sea,” he said.

“So, we boarded this boat called the Esperanza, it was like a cabin cruiser or a pleasure boat. There were three older men on board who behaved oddly and one of them began having a medical emergency. They were giving us inconsistent stories about where they traveled from, they said they left from somewhere but it was too far away for the amount of time that they had been out.

“Long story short, it eventually developed that they had at least one 50 caliber sniper riffle on board and one of the men then admitted to someone on the boarding team, not to me, that they were on a mission to get to an island where Fidel Castro was attending an event at that time. They were going to try to assassinate him. Of course, there had been a whole Cuban exile community that has been involved with stuff like that,” Stokes said. “Well, of course they were arrested and eventually prosecuted.”

Stokes said his proudest accomplishment was his journey of becoming an underway officer of the deck.

“One of the things that surprised me was that when I went in, I was focused on doing Coast Guard law enforcement. That was really my motivation for joining. I thought that I was joining a sort of police department of the sea, and I didn’t really think a lot about the fact that the Coast Guard had these big ocean-going ships. I just figured that I would be on a police boat in a harbor,” he said.

“What ended up being the best thing about it and what surprised me, was I really enjoyed being a sailor. I really enjoyed actually learning what it takes to operate a ship out at sea, and all of the different duties that go along with that. Connected to that is probably the accomplishment that I am most proud of. On that patrol boat, I became designated as what is called an underway officer of the deck, which is for four-hour watches that is the person on the bridge in charge of the ship. The captain is obviously the one in charge of the ship, but he or she is not on the bridge at all times. The underway officer of the deck is basically in charge of executing the captain’s orders for a four-hour watch.

“That was a pretty cool thing that the Coast Guard trusted me with that. I would have been maybe 22 or 23 at the time and here I was basically driving the ship,” he said. “That was the moment that I really felt like I had accomplished something.”

When Sutton finished his service in the military, he returned to Baltimore County, Maryland, to finish his college degree.

“I did not end up studying criminology, but I ended with a bachelor’s degree. I went to the University of Maryland in Baltimore County, also known as UMBC.”

Overall, Stokes is grateful that he took the opportunity to be a part of the military and because he took that step, his whole perspective on life was impacted.

“It felt so good to be a part of these tight knit teams that at the moment of a high-stake situation, no one cared about where you were from or any of that, you never had a doubt that they would pull you out of the water and do their job excellently,” he said. “That is something that a lot of people in the military have experienced. However, I have never experienced that in civilian life at quite the same intensity.

“I think that one of the best things about the serving is that it took me out of my comfort zone. I didn’t grow up in a very military oriented setting, so when I signed up, I didn’t know anyone who was looking into the military, although my dad had been in the Army. For me personally, it is one of the best things that I ever did because it pulled me so far outside of what I would have otherwise been doing. It taught me a lot about hard physical work and how much I could withstand when I was tired, wet and cold. I was also taught leadership and that a true leader doesn’t just keep responsibility for themselves, but rather, they look for people to step up. You just look out for the people who you are with.”

Stokes currently lives in Elkins with his wife and two children and works as a freelance writer.