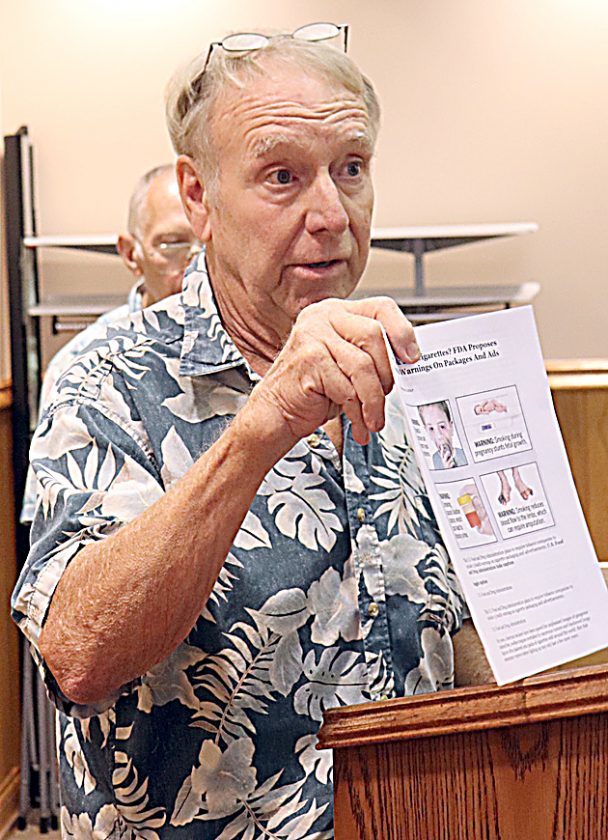 BUCKHANNON — The Upshur County Commission denied a request from the Upshur County Tobacco Prevention Coalition to make county properties tobacco free outside but agreed to post signs asking residents to refrain from its use.

Tim Higgins, chair of the coalition and a representative for the American Lung Association, said Thursday, “We’re here to ask you, the commissioners, to make your property owned and controlled by the commission to be smoke free and vape free outside.”

Higgins told the commission there will be less maintenance and clean-up of “the most littered product in the world which is cigarette butts.”

He also referenced a previous presentation in which he poured BBs into a jar.

“Remember that 1,212 number of BBs,” Higgins said. “Every 20 hours, every minute of every 20 hours one person in this country dies directly related to tobacco.”

But two commissioners referenced the harm reduction program that includes a needle exchange which happens in the county each month through a partnership between the Upshur-Buckhannon Health Department and Milan Puskar Health Right.

Higgins said, “It’s just like any other requirement of work. The classic example of that is beer. Beer is a non-alcoholic beverage as claimed by the State of West Virginia, but you still don’t let people drink outside of work.”

Cutright said, “As Dr. [Joe] Reed just said it is an addiction. These honest, hard-working people who are not breaking the law, why do we not give them the same consideration? Not less than a year ago, Dr. Reed (who is also the medical director for the Upshur-Buckhannon Health Department) was before us wanting our support on a needle exchange where they give the needles to the addict. They tell him, if you want to try to get control of your addiction, we will get you in touch with the right people, and try to help you quit?

“Why don’t we give the law-abiding citizens lighters, ashtrays, vapers…and tell them if you want help with this, we will try to get you help?”

Higgins said, “This is not an issue of personal rights. This is a health issue. For goodness sakes, if someone is so blasted addicted, that they have to take a smoke break every 20 minutes, it costs the employer 2 ¢ weeks a year.”

Cutright added, “If we are taking about addiction, addiction is addiction.”

The commissioner, who also voted against a similar request in 2015, proposed a compromise.

However, Higgins said, “That’s missing the entire point of it being a health issue.”

Reed said that 26 percent of people smoke compared to 74 percent who do not.

“That is 74 percent who are suffering because of the actions of 26 percent,” he said.

Cutright countered, “That 26 percent — this is still their county too.”

Commissioner Kristie Tenney said, “I’m excited that you are both passionate and have worked so hard to bring healthy living to Upshur County. As commissioner Cutright mentioned, I ask you to have that same passion for the harm reduction program because we are wanting to completely prohibit tobacco use which is great because we know the effects of that. Yet, if I have this cup of coffee and I pour water into it, I’m just watering down a cup of coffee. I still have a cup of coffee. I’m asking Dr. Reed, do you feel that is what is happening with the harm reduction? Could we take that same passion and completely dismiss all the drugs throughout the county? Is that something we are looking to do as well?”

However, Higgins said, “I’m a board member for the American Lung Association. That’s where my passion lies.”

Regarding the harm reduction program, Reed said, “I think we are struggling with what works best. The evidence at this point is that is a helpful program. I don’t pretend to have personal knowledge to say it is the best or isn’t the best. That is the best evidence we have at this point that the harm reduction effort. I think there are differences between tobacco and various drugs. We struggle with trying to find the answers for each of the programs.”

After some more discussion, commission president Sam Nolte said he was also worried about enforcing such a ban.

He suggested signs that would ask people to refrain from using tobacco products on county property.

After some more discussion, Cutright moved, seconded by Tenney to put up the additional signage.