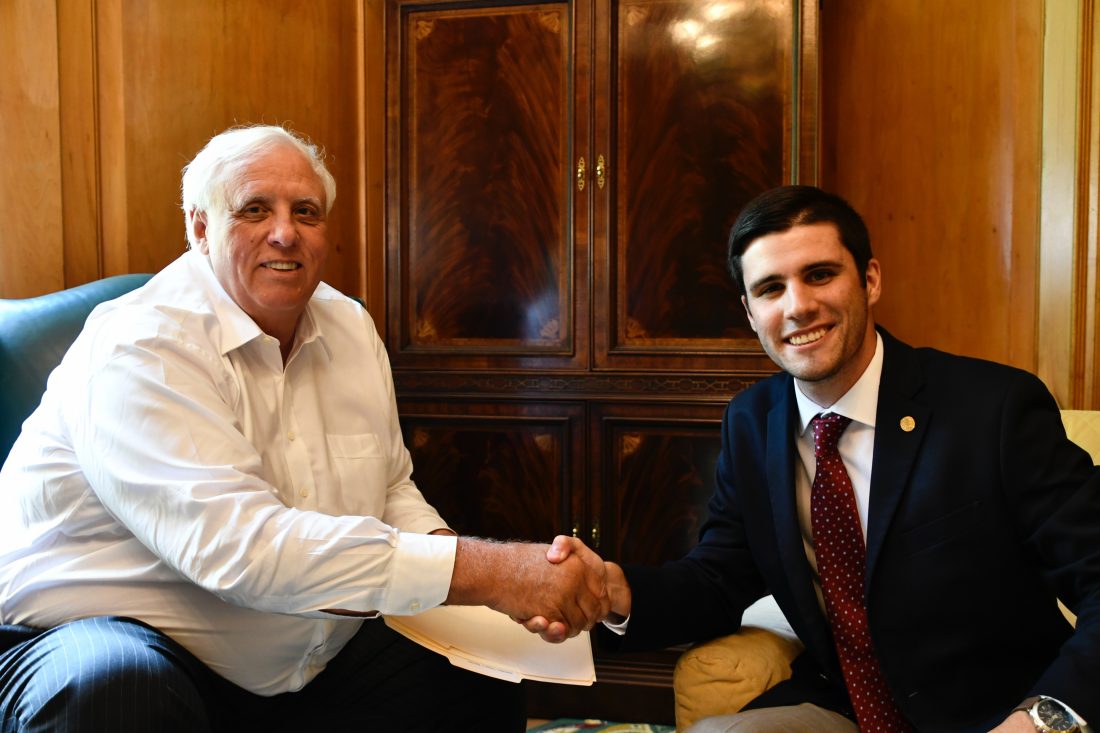 CHARLESTON — For the first time in 13 years, Pleasants County will have a native representing most of the county as well as all of Ritchie County in 7th District House of Delegates.

Gov. Jim Justice announced that Trenton Barnhart of St. Marys will replace Jason Harshbarger as a member of the West Virginia House of Delegates representing the 7th District.

Barnhart, a 2015 graduate of St. Marys High School and 2018 graduate of the University of Charleston, was one of three names sent to the governor Sept. 12 to fill the vacancy left by Harshbarger, who resigned effective Aug. 30. The other two names were former five-term District 7 delegate and Ritchie County native Woody Ireland, and retired businessman and St. Marys resident Dan Boley.

The 22-year-old Barnhart is a compliance auditor for state Auditor J.B. McCuskey. Prior experience includes working for the House of Delegates as a legislative analyst for the House Education Committee during the 2019 legislative session. He also was president of the University of Charleston College Republicans and has worked on multiple local, state and federal political campaigns.

Barnhart will be the first Pleasants County resident to represent the 7th District since Otis Leggett served from 1987 to 2006. Since then, the seat has been in the hands of Ritchie County residents Ireland (2007-2016) and Harshbarger (2017-2019)

“It’s just such an honor and I look forward to doing everything I can to serve, to serve the people of Pleasants and Ritchie counties,” Barnhart said.

When the lawmakers return to Charleston Sept. 23 for legislative interims, Barnhart will be joining a number of younger House members. These members include 19-year-old Del. Caleb Hanna, R-Nicholas, who is the youngest African-American in U.S. history to be elected to a state office, and 26-year-old Del. Kayla Kessinger, R-Fayette, the assistant majority leader and the state’s Republican national committeewoman.

The 2020 legislative session is still five months away, but Barnhart is already working on policy priorities, which include economic development and continued growth of the natural gas industry. Ritchie County is one of the top five counties for natural gas production, while Pleasants County provides support services for the industry.

“I want to help further the oil and gas developments here in the state,” Barnhart said. “In my district in Pleasants and Richie counties, it’s brought in a lot of opportunities for economic growth and for jobs here in the community. We definitely want to expand that as much as we can.”

Other priorities for Barnhart include improving infrastructure in the state and improving broadband access. Having worked in the state Auditor’s Office, Barnhart also wants to improve laws to provide greater accountability and transparency to the public.

“I want to promote government transparency and government accountability because it’s important that government is accountable to the people, not the other way around,” Barnhart said.

Barnhart said he would seek the support of the public by running for the District 7 seat in the 2020 election. He said it was the least he could do to give back to a community that has done so much for him.

“I feel that I’ve been able to gain the support of a lot of people and I don’t want to let them down,” Barnhart said. “I plan to run and hopefully we build this movement and ultimately make West Virginia a better place to live, work, and raise a family.”