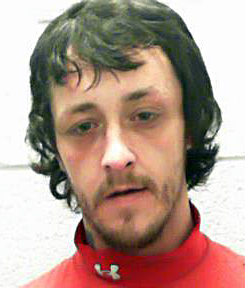 Ryan Neil Coberly, 28, is charged with armed robbery and conspiracy. His bond was set for $30,000 cash only by Randolph County Magistrate Judge Ben Shepler.

According to the criminal complaint filed by Trooper E.B. Malcomb of the West Virginia State Police, on Sept. 9, the officer received a walk-in complaint from the alleged victim who informed the officer that he had recently been robbed in the Coalton area.

The report states that Malcomb obtained a written statement from the alleged victim that detailed the incident, which took place at a spot referred to as the Coalton Dam.

The report states that the alleged victim indicated Coberly began to empty the alleged victim’s pockets — taking approximately $150, cell phone, a bag of change, a radar detector, a torch with a three burner head and multiple flashlights.

According to the report, the alleged victim indicated that he was being held at gunpoint as the other man began to go through his truck and take items — including a Husqvrna 240 chainsaw and multiple axes. The report states that the man then told Coberly to get in his truck — described as a maroon Toyota Tacoma with tool boxes down each side of the bed — and the men left the scene.

The report states that on Sept. 18 at approximately 11:30 p.m., Malcomb was conducting routine patrol of the Riverbend Park area where he observed a maroon Toyota Tacoma in the parking area after closing hours, at which time he initiated a traffic stop in order to inform the driver that the park was closed to the public at that time. According to Malcomb, Corporal S.P. Miller made contact with the driver who was identified as being the same man who was involved in the robbery.

“During the initial contact, these officers observed a small plastic bag on (his) stomach that appeared to have a white in color residue consistent with methamphetamine,” said Malcomb.

The report states that the man was then asked to step out of the vehicle, at which time he verbally consented to a search by officers; during the search of the vehicle, Malcomb observed small axes and a Husqvarna 240 chainsaw consistent with the stolen items previously described by the alleged victim.

According to Malcomb, upon further investigation, he noticed that the serial number and been removed from the chainsaw, and he seized the items.

Malcomb states that on Sept. 19, he contacted the alleged victim to respond to the West Virginia State Police Detachment in order to identify whether any of the seized items were his and was able to determine the type of chain on the chainsaw prior to removing the blade cover and the two axes by brand name by only viewing the bottom of the handles which did not have the name inscribed.