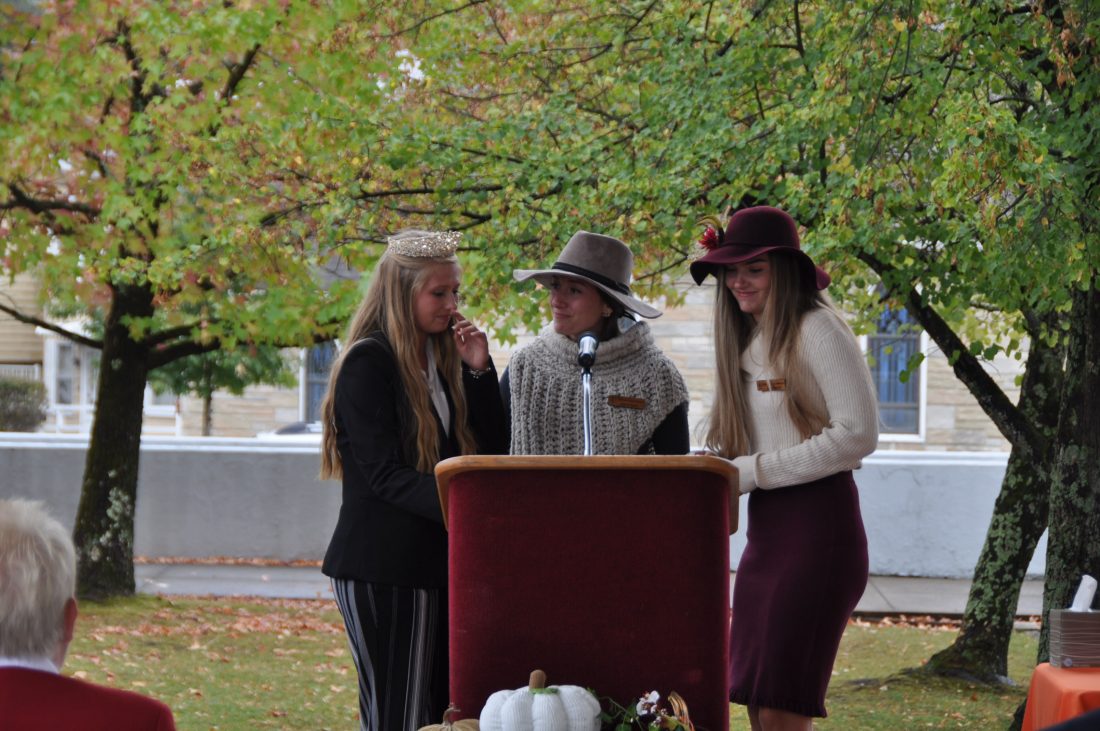 ELKINS — The 83rd Mountain State Forest Festival, which had been blessed with beautiful sunny skies all week, closed Sunday in rainy weather during an emotional ceremony at the Federal Building Plaza in downtown Elkins.

Dozens of spectators turned out despite the wet weather to say goodbye to Queen Silvia LXXXIII Kaitlin Marie Smith on Sunday.

Smith’s Maids of Honor, Christine Paige Zurbuch and Susan Elizabeth Riggleman, both of Elkins, spoke at the closing ceremony.

“It has been such an honor … The thing about the festival that stuck out to me this year was dedication to service,” Riggleman said, referring to the MSFF Queen’s Department. “I was served by three wonderful ladies this week. They showed up Saturday with their own needs on the back burner.

“I had a fantastic week full of memories I will cherish for many years,” she added.

Zurbuch spoke about the sadness of endings.

“Endings are inevitable. Leaves fall, you close the book, you say goodbye. Today is one of those days for us,” she said. “Today we say goodbye to the fairy tale we’ve been fortunate enough to live in for the last eight days.”

“Everywhere I traveled this past week, I got to experience firsthand the happiness the Forest Festival brings to the people of Randolph County. Through every parade route, every squirrel cage ride, every school tour and every minute, I got to savor the splendor that one for one week the people of Randolph County got to forget about their differences and come together and celebrate the very culture that binds us.”

Smith began her speech but was overcome by emotion. As she cried at the podium, her Maids of Honor approached to comfort her, and Zurbuch read Smith’s speech aloud to the crowd.

“As a little girl, she attended many festival events. For her and her family, she knew this was going to be extremely special,” Zurbuch read.

Smith thanked her minor court, the Queen’s Department members Melanie Dempsey, Cindy Nucilli and Melissa Kilgore; and Robin Miller, the director general of the 83rd Mountain State Forest Festival. Smith also said she knew she and her Maids of Honor Zurbuch and Riggleman would remain friends through the years.

During the ceremony, Smith received a scrapbook from the event, and a Queen’s Quilt, featuring blocks stitched by community members. The ceremony concluded with the placing of a royal memory stone bearing Smith’s and Miller’s names in the Federal Building Plaza, which has been done each year during the festival’s storied history.