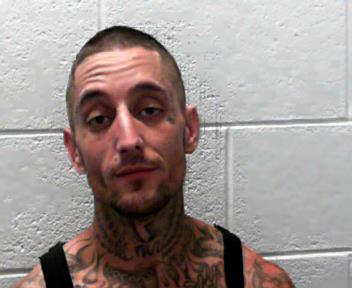 ELKINS — An Elkins man is accused of fleeing from officers at speeds of more than 100 mph, leading a chase from Elkins to Bemis.

Clinton Dale McCauley, 28, has been charged with fleeing from an officer, a felony. Bond was set at $50,000 cash by Randolph County Magistrate Rob Elbon.

According to the criminal complaint, prepared by Senior Patrolman C.G. Boatwright of the Elkins Police Department, on Oct. 12 in Elkins the officer saw McCauley driving a Mitsubishi Eclipse, then learned that McCauley’s license was suspended, and that the registration for the vehicle “returned to a Ford Focus.”

Boatwright pulled behind the vehicle on Livingston Avenue and turned on his emergency lights, the complaint states. McCauley reportedly “motioned that he was going to pull over in a safe location,” but when Boatwright began to exit his cruiser, McCauley “accelerated rapidly and began to flee out Georgetown Road.”

McCauley reportedly “passed multiple vehicles on the double yellow line, used both lanes of traffic, almost hitting vehicles head-on,” according to the complaint. At the intersection of the Georgetown Road and Rich Mountain, McCauley reportedly ran the stop sign and almost struck the vehicle of Sgt. B.A. Talkington of the Randolph County Sheriff’s Office.

McCauley contained to flee “at speeds in excess of 100 mph” and “went into the oncoming traffic lane” and drove around Deputy S.D. Kyle as well, the police report states. McCauley “then ran the stop sign at the intersection of Bridge Street and Main Street and continued straight into the alley and then into residential yards. I then observed (him) behind the post office on Files Creek in the grass,” Boatwright wrote.

The chase continued on Files Creek, with McCauley “almost hitting multiple vehicles” before heading onto a gravel road and continuing to drive at high speeds. He then “made a right turn toward Bemis” and “continued to drive erratically … braking hard in attempts to make me hit him,” Boatwright wrote.

McCauley “then stopped the vehicle and continued to flee on foot” going “down steep sides of the mountain to the below roads,” the complaint states. Officers pursued on foot but McCauley was not located that evening.

A warrant for McCauley’s arrest was issued and bond was set by Elbon on Monday.