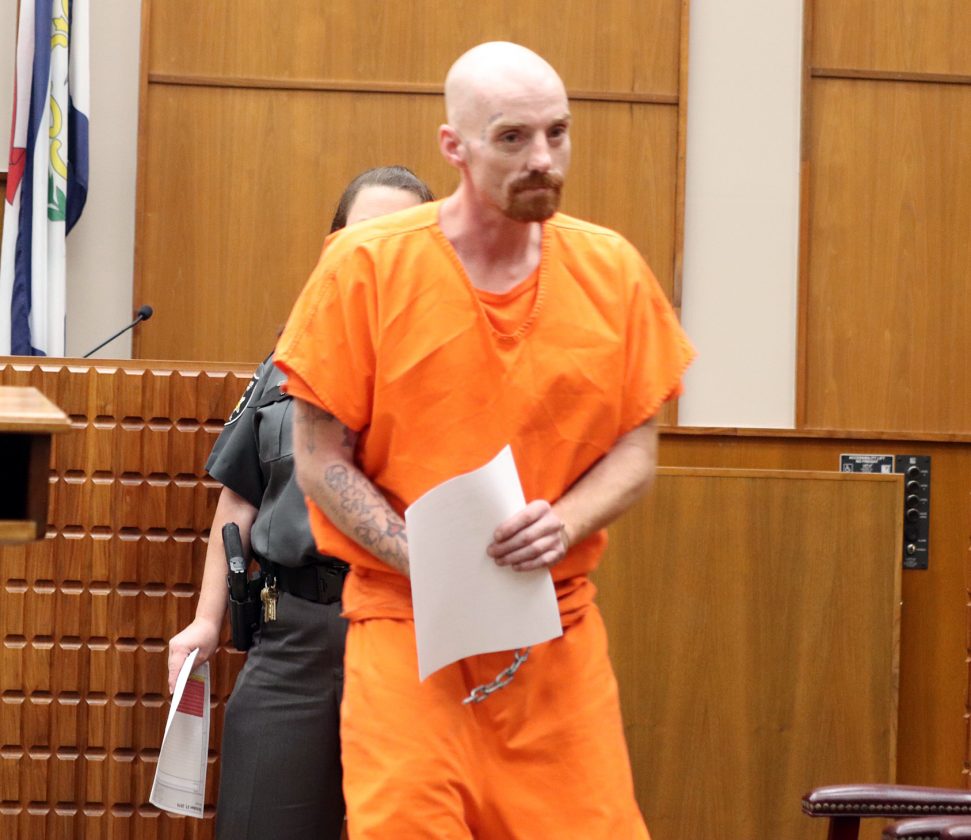 The Inter-Mountain photo by Amanda Hayes Justin D. White, 37, of French Creek, plead guilty to breaking and entering, a felony, and plead guilty through an information to burglary, a felony.

Justin D. White, 37, of French Creek, represented by attorney Ira Richardson, plead guilty to breaking and entering, a felony, and plead guilty through an information to burglary, a felony.

White was indicted by the Upshur County Grand Jury on Sept. 9 for conspiracy, a felony; two counts of breaking and entering other than a dwelling, a felony; and grand larceny, a felony.

Prosecuting attorney David Godwin told the court that it was believed that White knew about the location of the ATV.

“There is not reason to believe he took it,” Godwin said.

White will have to pay court costs and restitution which is being determined. Regarding the M2 Bravo property, the restitution is believed to be over $6,000.

White told the court that Canter and Bonner had picked him up and driven him to the M2 Bravo property but did not see him break the lock.

“I went ahead of them and broke the lock so they didn’t know the building was locked,” he said. “They thought they were allowed there.”

Items stolen included two air soft guns and some tactical equipment, vests, gloves, etc. White said he shared some of the property with Canter and Bonner in exchange for taking him to the property.

Reger asked, “Did you not have any discussions at all about what you were doing? I mean, come on.”

White then said, “They knew I didn’t pay for it. There was nobody there to pay for it.”

Reger continued, “You went up there with the intention to steal it. Is that right?”

White replied, “Yes. I kept some of it and then I gave some of it to them for helping me. I had full intentions of going up there and taking stuff.”

On the truck stolen from the Jack Hill Road property, Godwin said it was not a new truck but had been altered when it was located.

White told the court he was driving by what appeared to be an abandoned trailer and stopped late at night when no one was around. He pulled the window out and rummaged through some stuff before finding his way into the garage where the truck had the keys inside.

White then drove the car he had been using down the road and parked it and came back for the truck which he drove to Dollar General in Buckhannon and parked it before asking a cousin to take him back to his car, claiming he was out of gas.

“I’m not going to lie,” White told the court. “I was under the influence of methamphetamine and had been up for a few days.”

White could face one to 10 years on breaking and entering and one to 15 years on burglary.