The Inter-Mountain photo by Eliana McCutcheon Daniel ‘Boone’ Smith of Glady, a Big Foot hunter, shared some of his experiences at the Elkins-Randolph County Library’s W.Va. Author Fair.

Some of the items Daniel ‘Boone’ Smith had on display during the Elkins-Randolph County Library’s W.Va. Author Fair. 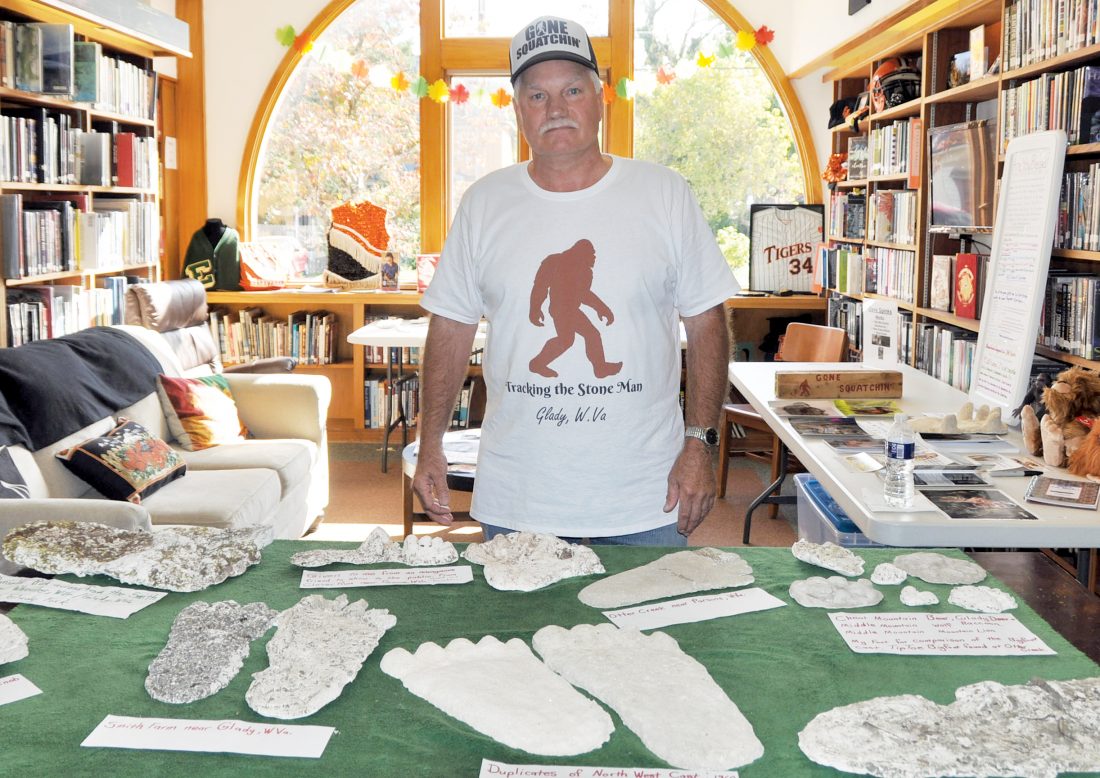 The Inter-Mountain photo by Eliana McCutcheon Daniel ‘Boone’ Smith of Glady, a Big Foot hunter, shared some of his experiences at the Elkins-Randolph County Library’s W.Va. Author Fair.

ELKINS — A local Big Foot hunter is sharing his experiences in searching for the famed woodlands creature of lore.

Daniel “Boone” Smith of Glady — “they call me Daniel Boone because I spend a lot of time in the woods,” he said — claims to have encountered Big Foot several times in Randolph County. He has written about his experiences on the internet and posted videos to YouTube.

“I saw my first one in 1965. We lived up the hollow in Norton above the old coal mines and Dad had hogs in a pin. There were woods right near that,” Smith said. “He had these light poles through the yard so we could go out there at night to get wood to bring in.

“Well, it had been raining all day so he sent me and my siblings to go out for wood. Our little dog Whiskers came along and while we were loading up with wood, we could hear this breathing. It sounded like somebody with asthma. It was in the dark coming down the dirt road toward us. The dog turned around and ran.

“About that time, we started smelling the stench because these things do stink. That is why they call them stink apes in other places,” Smith said. “My brother said to drop the wood and run so they started running. I just hesitated a little bit and you could tell that it was just right about to step out to where you could see it, so I threw my wood down and followed my siblings. I probably only ran about 30 feet when I stopped and turned around to see what it was because I wanted to see this ‘bear.’ When it stepped out under that light, it wasn’t no bear. 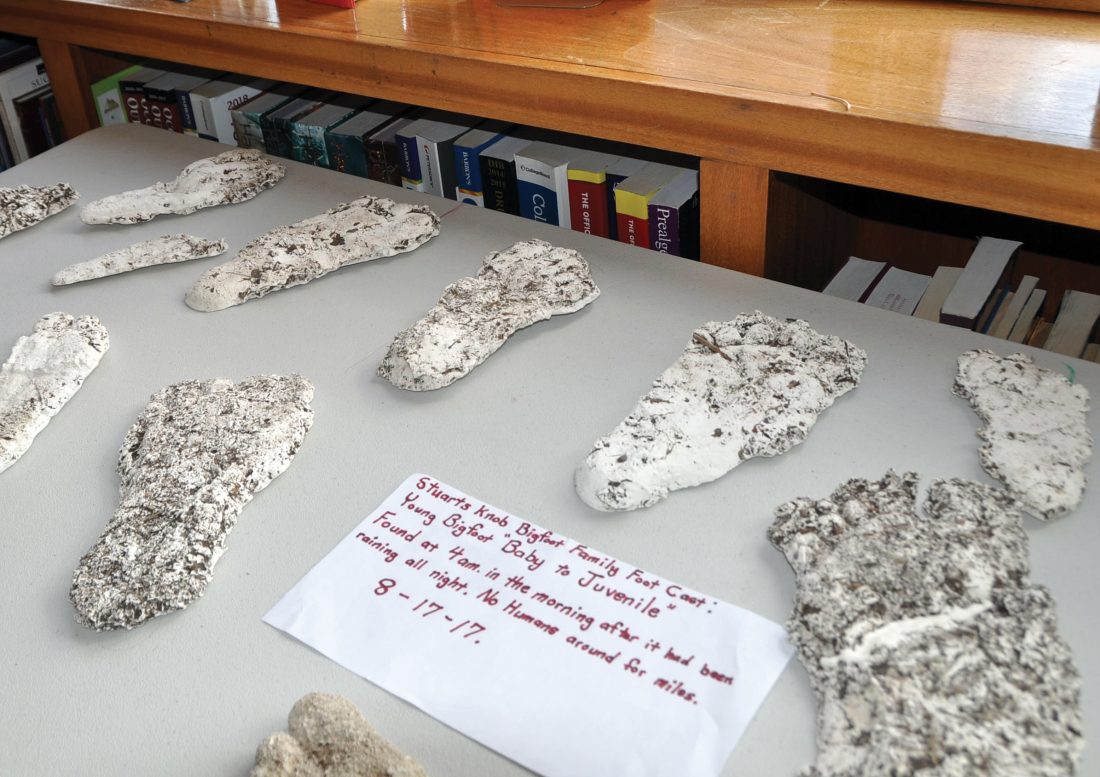 Some of the items Daniel ‘Boone’ Smith had on display during the Elkins-Randolph County Library’s W.Va. Author Fair.

“It looked like us but probably 8 feet tall. I was 10 years old at that time. I ran to the house and when I got in there they were already telling Mom and Dad that there was a bear outside,” he said. “Well, Dad went out with a flashlight and didn’t see anything.

“The next morning, we all went out there in the woodyard and I showed him where it was. There was a 19-inch footprint right there in the mud. Dad goes, ‘Yep, just as I thought. It was a bear.’ I know why he did that, he did it for us so we wouldn’t be afraid.

“We went back in the house trying to hear Dad and Mom talk about it. She asked Dad if she found anything and he said, ‘You know what? We saw a track out there. It couldn’t be a bear because it had a footprint just like ours but it was too long,'” he said. “I kept that under my hat all my life until with today’s age with the internet I could start to research.”

Smith says that, in the last 20 years, he has seen four other Big Foot-type creatures.

“It’s all about timing,” he said. “You see God has a timeline for everything. I believe in Jesus more than I believe in anything. But, I also believe in these because I’ve seen them with my own eyes. They have been at the right place at the right time.

“I’ve seen a little one, too. When they are young they have black, leathery faces. When I first saw him he was down like a football player. He was looking right at me. It looked like a bear, but had a hump in his back.

“When he stood up, he looked right at me because I was only about 20 feet away from him. He took off running,” he said. “My buddy and I started chasing it through the woods. But then we stopped because I said, ‘What if its dad and mom are out here and we are chasing the baby?’ So, we turned around.”

Most of Smith’s encounters took place at Stuart Knob in the camping area.

“Another time was when we were at Stuart Knob it had been raining nonstop,” he said. “On the ground it looked like someone had let their kids run around barefoot, but there was no one in sight. When we got to looking, there were almost 30 tracks. I only had enough plaster of Paris to put in the tracks to get about 14 tracks.”

Smith said these creatures have an unforgettable smell and make a variety of unique sounds.

“It’s hard to forget their smell. It smells like a mixture between a musky athlete plus a deer and horse. It is a combination, but they have a smell that is different from all other smells. Just really musky,” he said. “Also, I’ve heard these things growl at me, I’ve had them throw rocks at me, and they kind of huff like a bear does. I’ve heard the wood knocks, too.”

He says that the best way to seek a Big Foot encounter is to remain quiet in the woods and listen for calls.

“On TV, like ‘Finding Bigfoot’ and shows like that, Hollywood has them doing all kinds of yelling and trying all types of things. Well you can’t do that,” he said. “When you go out, you want to be super, super quiet. You have to remain quiet and use a red light, because they don’t seem to mind the light. You just have to listen because what a Big Foot does is he imitates everything in the woods. If you hear a hoot owl, really pay close attention because it might not be an owl if it sounds like a human making the sound.

“I’m basing my beliefs off of the DNA and research,” he said.

Smith’s overall goal is to inform people that these creatures are out there. He spoke at the Elkins-Randolph County Library’s annual W.Va. Author Fair on Oct. 4.