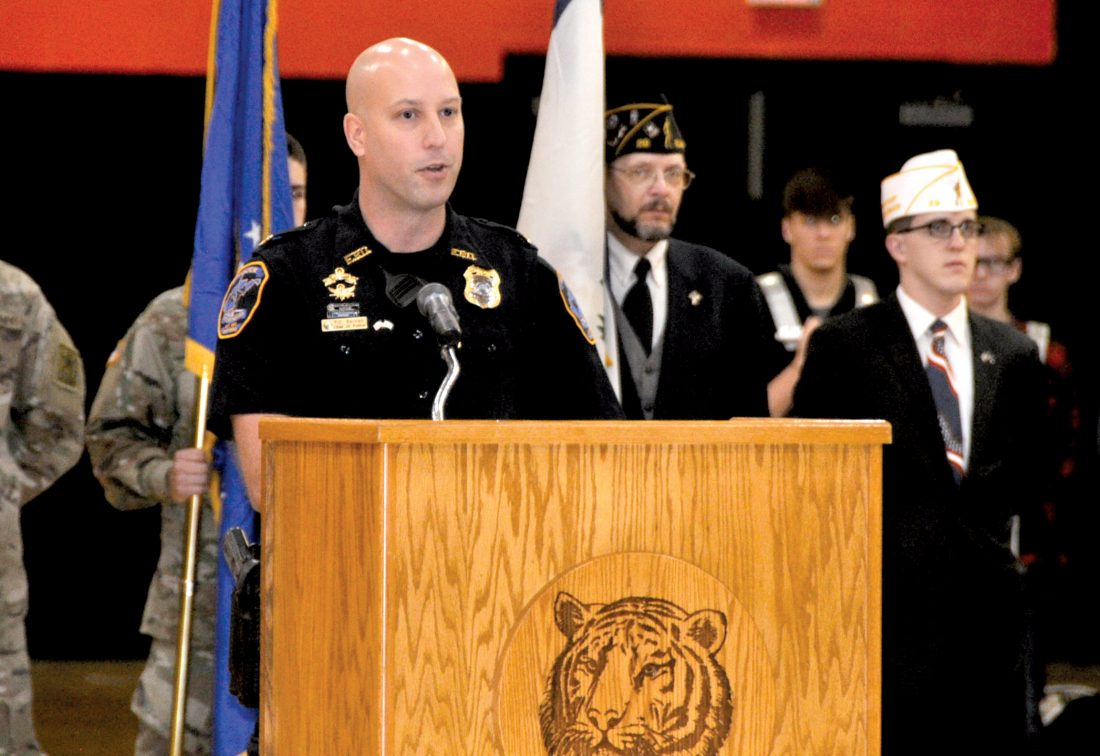 The Inter-Mountain photo by Haley Gordon Elkins Police Chief Travis Bennett presents as the honored guest speaker at the Veterans Day Assembly on Thursday morning. The veteran shared stories with Elkins High School students about the meaning of Veterans Day.

ELKINS — Dozens of local veterans attended a Veterans Day Assembly at Elkins High School for all students and their veteran guests on Thursday morning.

Principal Carla Lambert began the assembly by thanking the veterans in attendance for their service.

“On the 11th hour of the 11th day of the 11th month, the fighting of World War I ended in 1918,” Lambert said. “Today at Elkins High School, we will take the time to honor veterans who unselfishly placed their lives on the line for freedom.”

After the presentation of the colors, Elkins Police Chief Travis Bennett was called to the podium as the honored guest speaker. Bennett served for 20 years in the U.S. Army as an Apache helicopter pilot before retiring and becoming a police officer.

“I began my career in the military here in Elkins,” said Bennett. “Eventually I decided that I wanted to become an officer and become a better leader. Once I did that, I decided I wanted to fly helicopters.”

Bennett trained to earn his certification to fly one of the most complicated helicopters our military has to offer, the Boeing AH-64 Apache.

“Not a day goes by that I don’t think about that thing,” he said.

Bennett added he wanted to speak to students about the value of Veterans Day, to himself and to those who have never served.

“For me, it’s a day of reflection,” said Bennett. “I sit back and I think about the people that I met.

“I think about the things that I’ve done, some good, some bad. But they made me who I am today,” he said as he reminisced. “I also think about sacrifice. Every veteran’s made a great sacrifice of some kind or the other. Every one of us, at some point, made the decision that saving our country and saving our fellow Americans is more important than our personal safety.”

Bennett recounted the story of his friends and fellow infantrymen who gave their lives in Afghanistan in 2013.

“It’s been six and a half years and to this day, we’re not 100% sure what had happened to those two soldiers,” he said.

“The point I want to make with that is the comradery. My two friends (…) are buried together,” said Bennett. “We live together, we train together, we fight together, and we die together.”

Bennett also said the reason many veterans make these decisions is out of love.

“So that’s why Veterans Day is important to me. Why should it be important to you?” Bennett asked. He then urged the students to “think about what these men and women have done for you, so that you might live the life that you live now.”

After Bennett’s speech, the school presented veterans with a wreath and the West Virginia Highlanders of Davis & Elkins College played military music for those in attendance.