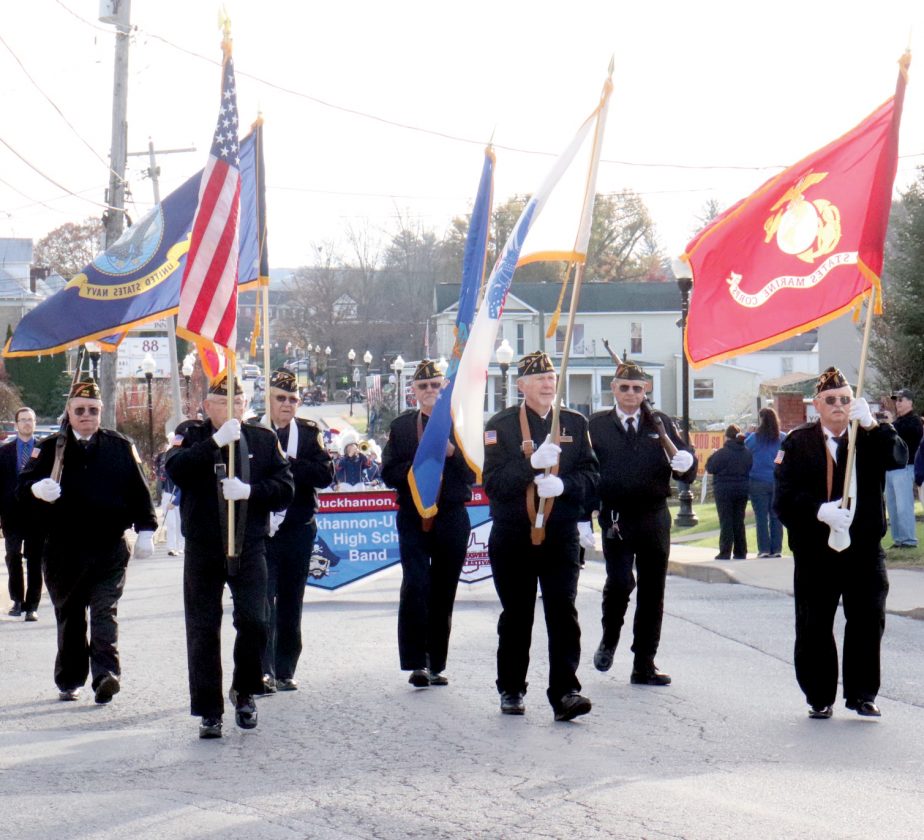 BUCKHANNON — The Upshur County Honor Guard is raising funds to replace its nearly 17-year-old van with a newer model.

On Veterans Day, local auctioneer Dave Kelley said the community was making a donation of $3,300 to start the fundraising.

“It was brought to my attention that the van they are driving is on its last leg,” he said. “At that point in time, me and another gentleman started talking about how we could get veterans a new van. This community really owes a debt of gratitude to those veterans who have served. They have served our country and still serve us today.”

The donation came after local veterans and other groups marched down Main Street for the annual Veterans Day Parade which ended at Jawbone Park under the Walk of Valor — a Create Buckhannon project where banners honoring servicemen and women hang from Memorial Day through Veterans Day.

Larry Brown, commander of the VFW Post 3663 and the honor guard, said the van is a 2003 model and has developed problems as it ages.

“It is wearing out like I am,” he said. “It doesn’t run the best anymore and it just is not reliable.”

The van is used to transport the honor guard to all funerals and other events it is asked to participate in.

The goal is to try to trade in the van in the new year.

Mayor David McCauley recognized veterans during the ceremony at Jawbone Park and promoted a project he would like to see happen.

Sen. Bill Hamilton, R-Upshur, spoke during a ceremony held at the VFW Post 3663.

“We are here to honor our service members and to remember their sacrifices they have made and the courage it takes to defend honor, duty and country,” Hamilton said. “Thinking of the heroes who join us in this group today and those who are only in spirit, a person can’t help but feel awe by the enormity of what we encounter. We stand in the midst of patriots and the family and friends of those who served.”

Hamilton recognized all veterans as well as their family members to stand and be recognized.

In the afternoon, Buckhannon Walmart continued its 17-year tradition of hosting a Veterans Day program.

Candy Long said, “The reason why we started this program 17 years ago was because we believed our veterans in our hometown and throughout the United States were very important. They did a job that a lot of us did not want to do. These people don’t walk around looking for people to thank them, they don’t ask for anything and mostly they stay hidden.

“They are our grandfathers, dads, moms, aunts, uncles. They are our daughters, our sons, our sisters and our brothers. Some are our very best friends. They joined different branches of the military and served in different places, times and eras. All wars were important to people who served in them. They all came back with memories they wish they didn’t have. Some had no choice. Some stepped up to the plate but all these soldiers gave up something for you: their lives, their family and their freedom.”