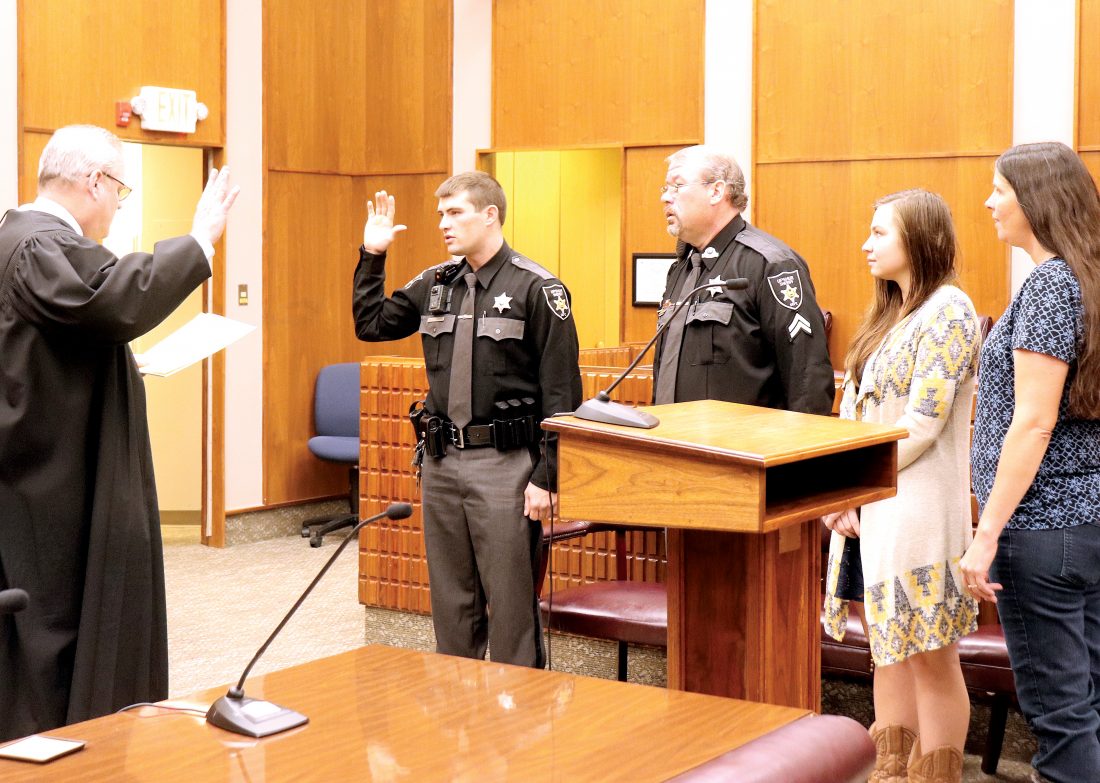 BUCKHANNON — In 2004, when Upshur County Sheriff’s Cpl. Dewaine Linger was sworn in, his son, Dakota, was there by his dad’s side.

Fifteen years later, Dakota was the one being sworn in as the newest Upshur County Sheriff’s deputy. The courtroom has been updated. This time, it was Judge Jacob Reger and not retired Judge Thomas Keadle swearing in a Linger. Family was in attendance and father and son were both in uniform.

“I’ve always looked up to my dad and wanted to follow in his footsteps,” deputy Dakota Linger said.

“This is what I wanted to do. I like being able to help people. There’s a lot to law enforcement and I am trying to get drugs off the street.”

With his interest in law enforcement, Linger ended up being hired in a neighboring county but there was always the thought of coming back to Upshur County. Linger graduated from Buckhannon-Upshur High School where he was an all-state wrestler.

“I’ve always had a desire to work here,” he said. “It’s where I grew up. Belington gave me the opportunity to have the job up there and that’s where I went.”

After three years in Belington, an opportunity presented itself back in Upshur County and the timing was right. The Upshur County Sheriff’s Department has now hired four deputies this year.

Linger’s dad, Cpl. Dewaine Linger, said it was an honor to have his son working in the same department with him.

“We’ve been wanting to get him over here for a long time and things just lined up finally to where it happened,” he said. “I’m glad to have him on board. In about 5¢ years, I will retire and he can carry on and keep the citizens of Upshur County safe.”

The elder Linger, who officially started his sheriff’s department career Nov. 21, 2004, will be assuming a new role Dec. 16 when he begins as the Prevention Resource Officer at Buckhannon-Upshur High School so deputy Dakota Linger will be doing road patrol.

His official start date was Dec. 8 and he will spend the next month in training. As a certified police officer with three years of experience, there will be a relatively short learning period but deputy Linger will spend about two weeks on day shift and two weeks on night shift with another officer to learn the Upshur County system before working alone.

“He knows what he is doing; he just has to learn our paperwork and court system,” Dewaine Linger said. “Each county is a little different in the way they operate.”

Right after the swearing-in ceremony, the newest deputy was off to a meeting.

“I’m just excited to get started,” he said.