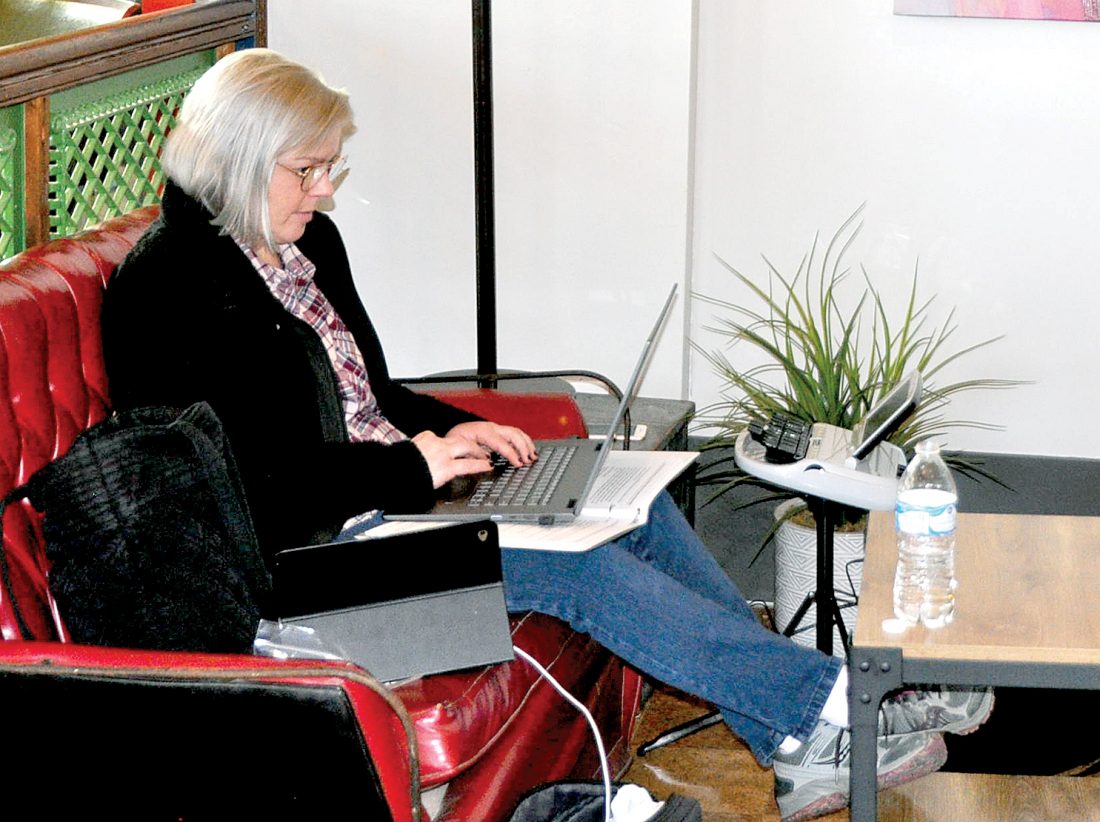 The Inter-Mountain photo by Haley Gordon Sara Gerot utilizes the open workspace membership tier of the Common Door coworking space in downtown Elkins. The dedicated desk spaces in the back of the building offer even more privacy for those who need it.

ELKINS — A new business offering “coworking space” offers an escape from cabin fever for those who normally work independently or from home.

Coworking is an alternative to working at home or at a formal office with a long-term lease, utilities, and housekeeping. The area provided by the Common Door, located at 125 Third St. in downtown Elkins, offers fully furnished workspaces that are move-in ready.

Mark Doak, owner and founder of Common Door, came up with the idea about five years ago.

“We had seen coworking spaces in other communities and thought it would be a good idea for Elkins,” he said.

The eye-catching design of the interior, consisting of 100 vintage doors beneath the original 14-foot tin ceilings, is thanks to Doak’s wife, Marsha.

“She has an artistic eye,” Doak said. “We had a few doors that we had taken out of another place and decided that would be a good way to create separation for the spaces. We started buying doors any place we could find them.”

“She and I pretty much laid out the space and put that together,” said Doak. “Of course, when you get to air conditioning and all the electrical and plumbing and so forth, we hired professionals to do that.”

“People on the Common Door side, of course, buy coffee and food from TipTop but it also brings business to both sides of the building,” said Doak.

There are two membership options, both with 30-day commitments. The front of the building features an open format with a mix of workstations and personal lockers for $125 per month, while the rear has dedicated desk spaces and storage areas for $275 per month.

Both options include access to the large, 14-seat conference room, as well as the smaller four-to-six seat room. Other available amenities include high speed internet, keyless entry to the building, a kitchenette, and a secure, on-site mailbox.

There are also “telephone booths” available to members that are essentially cubicles with a roof. The booths consist of a desk and a chair, and simply offer a more private space to make a phone call or even take part in a video conference.

Doak mentioned that the workspaces in the front half of the building are available on a first-come, first-serve basis every day and that the benefit of upgrading to an assigned place ensures that the space will be available each day.

“We got one person that tried a dedicated desk for probably six months and then decided to save a few dollars (…) so they moved from the back to the front and seemed perfectly happy with that,” said Doak.

Valerie Warner, affectionately referred to as “the Keeper of the Door” at the establishment, deals with some of the day-to-day activities that come with keeping a coworking space up and running.

“What I’ve been doing is kind of managing the marketing and promoting and letting people know that we’re here,” said Warner. “A lot of people kind of knew that we were here but they didn’t know what we were about so I’m trying to get some social media out there to tell people what we’re about.”

Warner also takes care of housekeeping as well as providing tours for anyone interested in the space.

“I’ve loved working here because it’s a really unique space,” she said. “You tend to see a lot of interesting people here and it’s nice to have that interaction.”

“I don’t think Marsha or I, either one, are disappointed. I think we’ve had it for almost a year and I think we’ve learned a few things,” Doak said. “It’s a new concept. We’ve had people using it but we’d like to have some more.”

The space is open seven days a week from 6 a.m. to 11 p.m. Interested parties can contact the Common Door at work@thecommondoor.com.