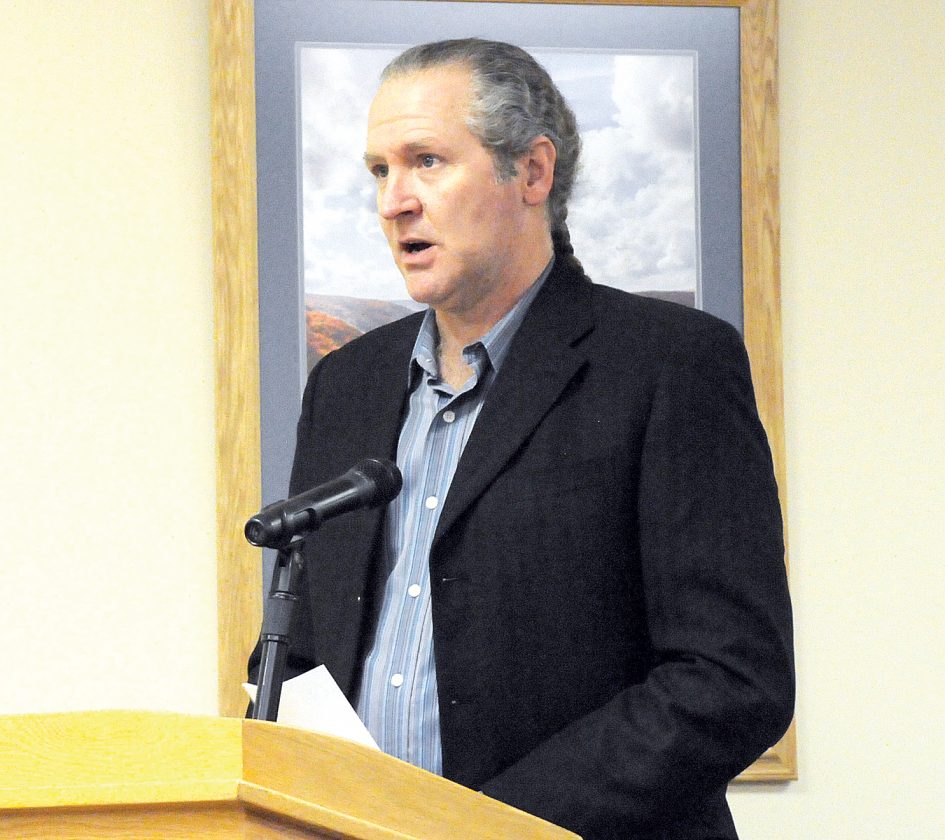 The Inter-Mountain photo by Brooke Hinzman Wil Spencer speaks against annexation by the City of Elkins during a Randolph County Commission meeting on Thursday.

During the public comment portion of the meeting, two county residents spoke against ordinances to annex three “donut hole” properties into the City of Elkins, which were approved at the Dec. 19 meeting of Elkins City Council.

“I’m here representing our business as well as the landowner who lives near Charleston — who is in opposition to the annexation by the city,” stated Wil Spencer, who is the executive trustee for a trust that owns a business on Wilson Lane. Spencer said the trust would like to keep the current zoning status on the property.

“Commissioner (Mark) Scott paid a visit last week, and I wasn’t even aware that the annexation was going on to the extent that it is,” Spencer said.

Spencer said he did not receive any documentation from the city in regard to annexation and that he was speaking at Thursday’s meeting to let his opposition be known, in addition to seeking procedural information.

“Our landowner is an attorney in the state, and he is definitely highly motivated to keep the status the way it is,” Spencer said. “No paperwork has been sent to him about what’s going on. So, when I called him the other day, he was quite shocked.”

Scott said the city, after passing the three ordinances in regard to minor boundary adjustments, will be presenting a request the county commission to consider those boundary adjustments at a later date, as it was not an agenda item at Thursday’s meeting.

“At some point in the future (the city is) supposed to come to us with it, but I wanted to reach out to the property owners to let them know that this was happening just in case they had not heard from anyone else,” Scott said.

“I don’t live in the city; I don’t work in the city,” Mullenex said, adding that he has started a petition against city annexation that has been signed by 17 individuals so far.

“Nobody that I’ve been to yet wants annexation. I feel like the city is taking advantage of us — being a little bit sneaky about how they’re doing this,” Mullenex said. “They’d already had one vote, brought in Texaco and Harrison Avenue right in front of the mall. I got second reading notice the day before the (Dec. 19) council meeting, and when I went into the council meeting and spoke, it was unanimous. They voted everything in.”

Mullenex noted that he intends to keep collecting signatures against potential annexations.

Scott then stated that the commission did not have the timeline for the city’s annexation plans, but the next step would be coming before the commission for approval of the minor boundary adjustments.

Of the three ordinances passed by council, Ordinance 268 is concerned with annexing the old Texaco station on Harrison Avenue, as well as a small strip of the road itself that’s considered out of city limits. Ordinance 269 focuses on annexation of the former Reibord Plant that currently houses IBEX on Wilson Lane, and Ordinance 270 addresses the Tygart Valley Apartments, also on Wilson Lane.