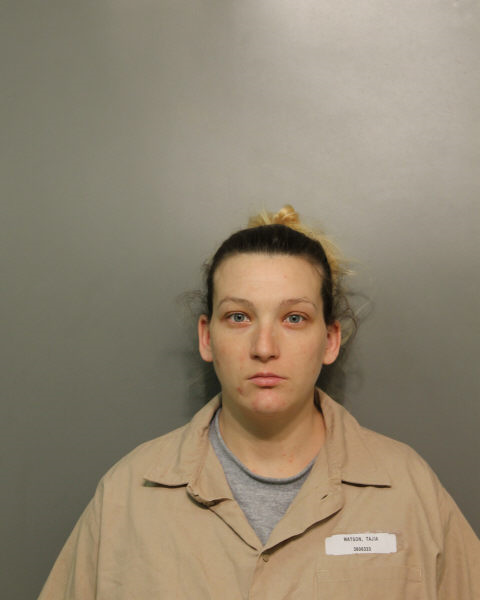 ELKINS — An Ohio woman is facing a felony charge in Randolph County after an incident near Elkins City Park.

According to the criminal complaint filed by Senior Patrolman D.T. Sayre of the Elkins Police Department, he officer was conducting routine patrol of the park area on Jan. 12, when he observed a white Chevy Silverado occupied by three individuals with another subject standing outside the vehicle.

As Sayre exited his patrol vehicle, he saw the middle passenger in the truck, later identified as Watson, “making frantic motions inside between the two passengers,” the report states.

According to the complaint, Sayre advised the occupants to place their hands on the front of the dash for his safety as he made contact with the male subject standing outside the vehicle, who Trooper D.T. Stallings tended to upon his arrival.

The report states that Sayre then made contact with the occupants of the truck, and Watson then “began to remove her hands from the dash” and “began to move them around the floorboard of the vehicle.”

According to the complaint, Sayre requested that the occupants step out of the vehicle, stating that a baggie containing a crystal like substance consistent with methamphetamine fell from Watson’s person as she attempted to exit the vehicle, at which time the officer detained her until further investigation was completed. Another female subject was then asked to exit the vehicle, to which she complied, the report states.

Sayre then searched the vehicle, locating a black bag laying in front of Watson’s seat that contained a digital scale with a crystal-like residue consistent with methamphetamine and the sale and distribution of controlled substances, syringes and notebook paper with money denominations along with a separate piece of paper with “Dad 130” written on it, the complaint states. As he finished searching the vehicle, Sayre located an orange container containing the same white crystal like substance that fell from Watson’s person. The report states that Sayre then spoke with the individuals and was advised that Watson and the female subject were both on parole, at which time he made contact with a parole officer who advised Sayre to take them into custody for “parole hold.”

Sayre requested that Corporal C.G. Boatwright respond to the scene in order to transport one of the two suspects to Elkins City Hall, and during processing, Watson stated, “Good luck with that charge,” and “It’s bull**** anyways,” the report states. After processing, Watson was secured in the back of a patrol vehicle.

According to the complaint, the other female subject stated that the “stuff isn’t hers” and that she would write a statement regarding Watson when Sayre asked who it belonged to. The statement read, “Cops pulled up put spot light on us and my brothers baby mama Taja bent over and threw something under the seat before the cop got out of the car.”

Sayre stated that a review of Watson’s criminal history revealed two convictions for possession with intent to deliver dating Feb. 23, 2018 and Nov. 29, 2017. The report states both females were then transported to Tygart Valley Regional Jail.