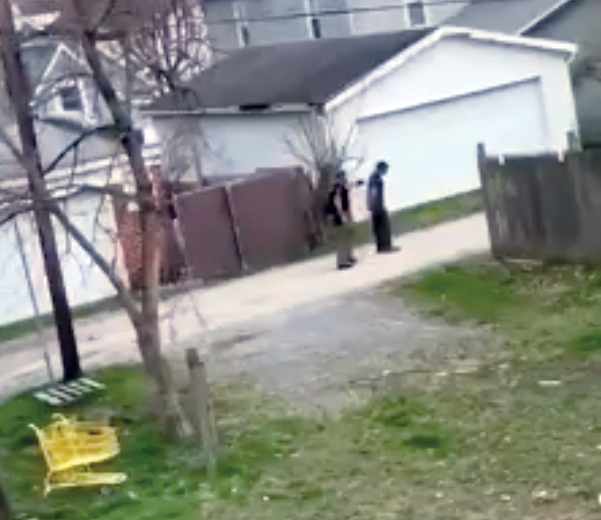 Video still/Facebook A video circulating widely on social media appears to show an Elkins Police Department officer interacting with the suspect in the shooting of Senior Patrolman Daniel Sayre on March 26.

ELKINS — The Elkins Police Department is conducting an internal review regarding the use of force in the arrest of the suspect charged with shooting a city police officer on March 26.

A video that appears to show an officer striking the suspect after the shooting is currently circulating on social media.

“We are aware of the video,” Elkins Police Chief Travis Bennett told The Inter-Mountain in an email Monday. “Under Elkins Police Department policy, any use of force by officers triggers an internal review.

“We can’t comment on any officer’s use of force during the events surrounding the shooting of Senior Patrolman (Daniel) Sayre while that review is ongoing.”

Sayre, 25, was shot at about 7:30 p.m. March 26 and was transported by helicopter to Morgantown. He returned to Elkins the next day after being treated for gunshot wounds to the calf and the shoulder.

According to the criminal complaint, Sayre, Corp. C. Boatwright and Patrolman D. George encountered Isner carrying a rifle in the alley between Henry Avenue and John Street, behind the Jennings Randolph Federal Building.

Boatwright told Isner to “drop the firearm and get on the ground,” the complaint states. Isner reportedly kept walking and told the officers “Just leave me alone.”

Sayre and Boatwright then walked after Isner and Boatwright applied a taser to Isner’s back, according to the complaint. Isner then reportedly fell to his stomach on top of the rifle.

Isner cursed the officers and then rolled over, said, “F– you guys” and fired three rounds, two of which struck Sayre in the left calf and right bicep/shoulder, the complaint states.

“Officers were unable to return fire due to the proximity of bystanders,” Bennett said in a press release March 27.

The video, which has been shared hundreds of times on Facebook, appears to show Isner lying in the street handcuffed. An officer who appears to be Boatwright then kneels down over the suspect.

The officer says, “You shot my f—–g partner, you son of a b—-,” and then appears to strike the suspect, the video shows.

The officer then appears to pull the suspect to his feet by the handcuffs, and then orders him to walk down the alley. Sirens of approaching emergency vehicles can be heard throughout the video.

Gov. Jim Justice spoke about Sayre’s shooting at the beginning of his press briefing on March 27.