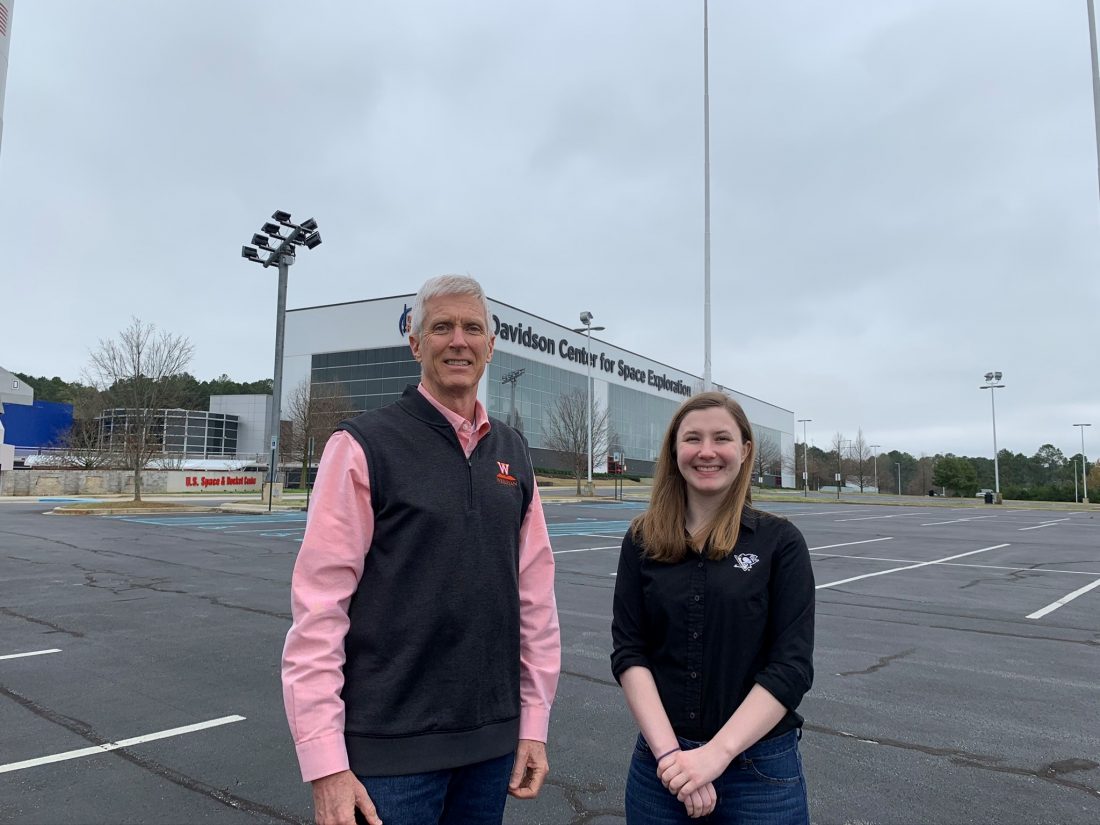 BUCKHANNON — An alumni connection has resulted in an exciting career opportunity for one recent Wesleyan graduating alumna. Olivia Rycroft ’19, a native of Elkins, has joined NASA in Huntsville, Alabama as a software systems engineer.

Two years ago, Rycroft listened to a talk at an engineering and physics club meeting by Tony Lindeman ’80, who was at that time, a member of the Board of Trustees. Lindeman has enjoyed a highly successful career at NASA and other related aerospace engineering firms. Last May, she was reintroduced to Lindeman by Bob Skinner ’75, vice president for advancement, at the annual senior class picnic.

“Mr. Skinner asked about my career plans at the picnic and when I told him of my desire to find a job in aerospace engineering, he immediately walked me over to where Mr. Lindeman was sitting,” noted Rycroft. “Tony was very supportive and enthusiastic, especially about my RockSat experience. He went above and beyond to help me with my resume and cover letter, wrote a letter of recommendation, and specifically looked for job openings he thought were a good fit for me. We had many email exchanges and phone calls.”

Rycroft only applied for one position and unfortunately didn’t make the cut. Shortly afterward, she was contacted by a Team Lead at Marshall Space Flight Center (MSFC). “The Team Lead had seen my resume and asked if I was interested in applying for my current position,” she added. “During my interview process, the only thing that I was asked about was my experience in the RockSat program that I participated in with Dr. Tracey Delaney at Wesleyan. That program is essentially a small scale systems engineering project.”

Rycroft works on the Space Launch System (SLS) Flight Software (FSW) Requirements team. “It is not something I have much knowledge or specific education, so my day-to-day includes many ‘mind-expanding’ experiences as my professor at Wesleyan, Dr. Bert Popson would say,” said Rycroft. “I spent considerable time listening, trying to be a sponge and learn as much about the SLS FSW and avionics as I can. I am currently preparing to work as a back-up console operator during software Green Run test activities scheduled for mid-2020. I have also had the opportunity to do quite a bit of test analysis on behalf of the FSW team to verify that our software is behaving correctly in various failure scenarios.”

Rycroft is thoroughly enjoying her first professional opportunity. “It is so cool to be a part of the SLS project,” she added. “I get excited just thinking about when we finally launch this huge rocket and all the possibilities for solar system exploration that it will bring.”

Lindeman continues to highlight how important Olivia’s extracurricular RockSat involvement and experience was to landing her a career opportunity at MSFC. Unbeknownst to her at the time, her RockSat participation helped her to begin developing marketable technical management and leadership skills that we were able to then capture in her updated resume. He added that every student should make a concerted effort to get involved in challenging and sometimes competitive technical projects. Lindeman encourages students to aggressively pursue summer internships to gain additional experience and broaden their qualifications.

She is also grateful to the Lindemans for their continued support. “Tony and Lorna have been incredibly kind and supportive and have helped make the move to Huntsville much easier,” Rycroft concluded.

Rycroft was a physics major and mathematics minor at Wesleyan. She was also was an Honors program participant and was a member of Alpha Gamma Delta sorority.

Her story is just one of many Wesleyan outcome successes. During the past two years, more than 95 percent of the graduating class have entered graduate or professional school or found employment. The numbers reflect an 85% knowledge rate.