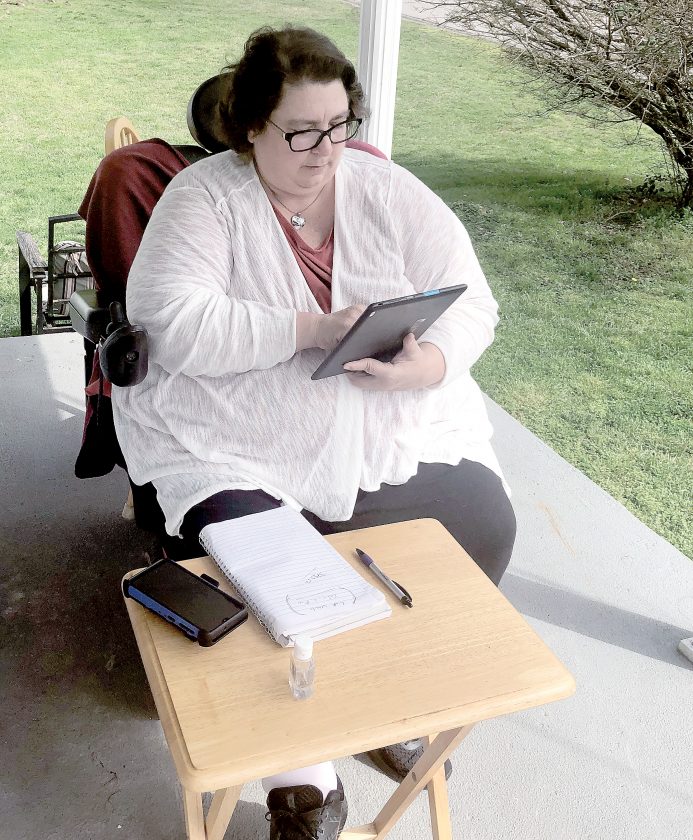 CHARLESTON — A Kanawha County woman last week became the first person with a disability to electronically vote from her home in West Virginia.

Belle resident Terra Muncy cast the first vote Friday for the primary election, which is May 12, doing so from the comfort of her front porch in a matter of 10 minutes.

“It was very simple and straight-forward,” Muncy said. “It didn’t take me very long at all.”

Muncy, who is wheelchair-bound, said she received an email from the Kanawha County Clerk’s Office with a link and a PIN number. Once she clicked the link and entered her PIN number, she was taken to a ballot, which she prepared and returned electronically.

“It was a really easy thing to do,” Muncy said. “I didn’t have any issues with it at all.”

In previous elections, Muncy has tried to go to her polling place, but due to being confined to her wheelchair, she said she never had any privacy when casting a ballot.

“One of the issues I had with voting in person is that for people like myself, when I go to vote the actual polling station you vote in is up high and meant for people who are standing,” Muncy said. “Your ballot is supposed to be secret, but anybody walking by can see what I’m doing because it is up so much higher than I am. For a lot of people, that’s very intimidating.”

The bill that made it possible for Muncy to electronically vote was Senate Bill 94, allowing voters with physical disabilities and the blind to vote in elections by electronic absentee ballots. These voters either are unable to leave their homes or otherwise can’t vote without assistance from others.

The bill passed the state Senate and House of Delegates by wide margins and was the second bill signed by Gov. Jim Justice on Feb. 3.

Voters with disabilities who qualify for the electronic absentee ballot fill out the full absentee voting application. Once approved, they electronically receive their ballot and vote online through a program created by Seattle-based Democracy Live and funded by Tusk Montgomery Philanthropies – the group that funded a mobile phone-based voting app for deployed military and overseas voters in 2018.

The system allows the voter to mark their choices without assistance from others, protecting the privacy of the voter. The voter can submit their ballot electronically or print out the ballot and mail it to their county clerk. The county clerk either received the ballot the same way they would receive any mailed-in absentee ballot, or they can receive it electronically and print out the ballot. Either way, each vote would have a paper ballot for the clerk to audit.

The Democracy Live program has been around since 2007 and was a partnership between the U.S. Election Assistance Commission which approves voting systems, and the Department of Health and Human Resources and was created to help voters with disabilities cast their ballot. The electronic voting system is called OmniBallot Online and is hosted on the Amazon AWS cloud used by several federal agencies for secure document storage.