The Inter-Mountain photos by Anthony Gaynor Local veterans salute after a wreath is placed in honor of all those who sacrificed their lives in service to the United States. The annual Memorial Day ceremony at the All-Veterans Memorial in Elkins drew several people, who followed social distancing guidelines. 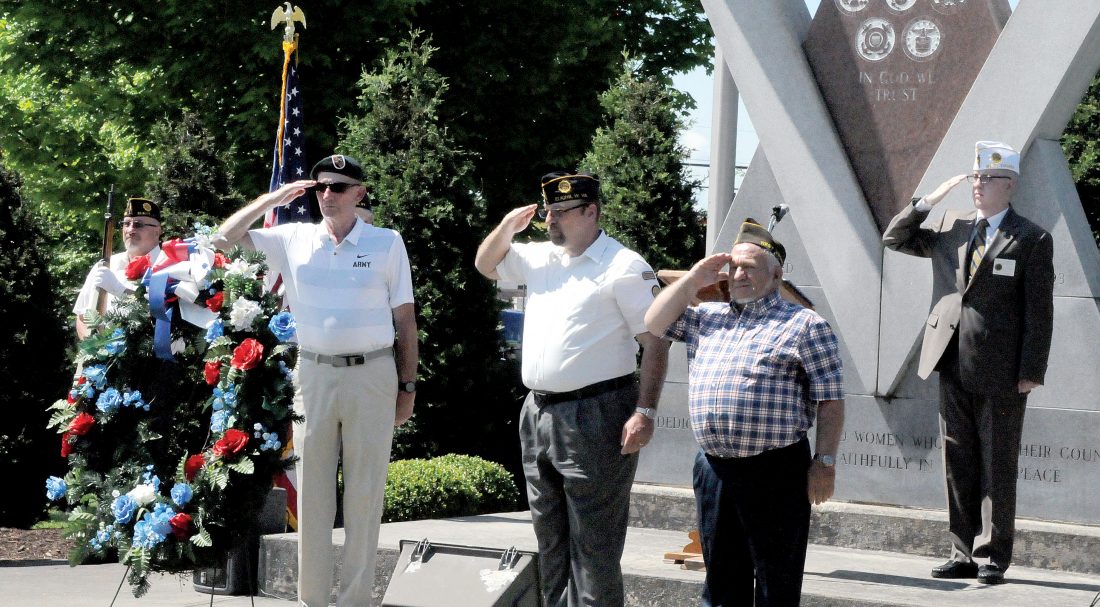 The Inter-Mountain photos by Anthony Gaynor Local veterans salute after a wreath is placed in honor of all those who sacrificed their lives in service to the United States. The annual Memorial Day ceremony at the All-Veterans Memorial in Elkins drew several people, who followed social distancing guidelines.

ELKINS — A crowd gathered at the All-Veterans Memorial in Elkins, while keeping social distancing guidelines, to commemorate Memorial Day and honor those who paid the ultimate price in service of their country.

“I am very thankful we could have this (the ceremony) this year,” Lambert said.

Representatives of the Highland Adventist School, with no students present, sang the National Anthem and invocation was given by 9th District Chaplain Arley Simmons. Elkins Mayor Van Broughton also provided a message to of remembrance.

“I realize that these odd circumstances have temporarily affected how we do things, but rest assured, I am thankful for each of you doing your part to flatten the curve of this virus,” Broughton said. “It has greatly impacted our lives and I know we are al looking forward to moving passed it.” 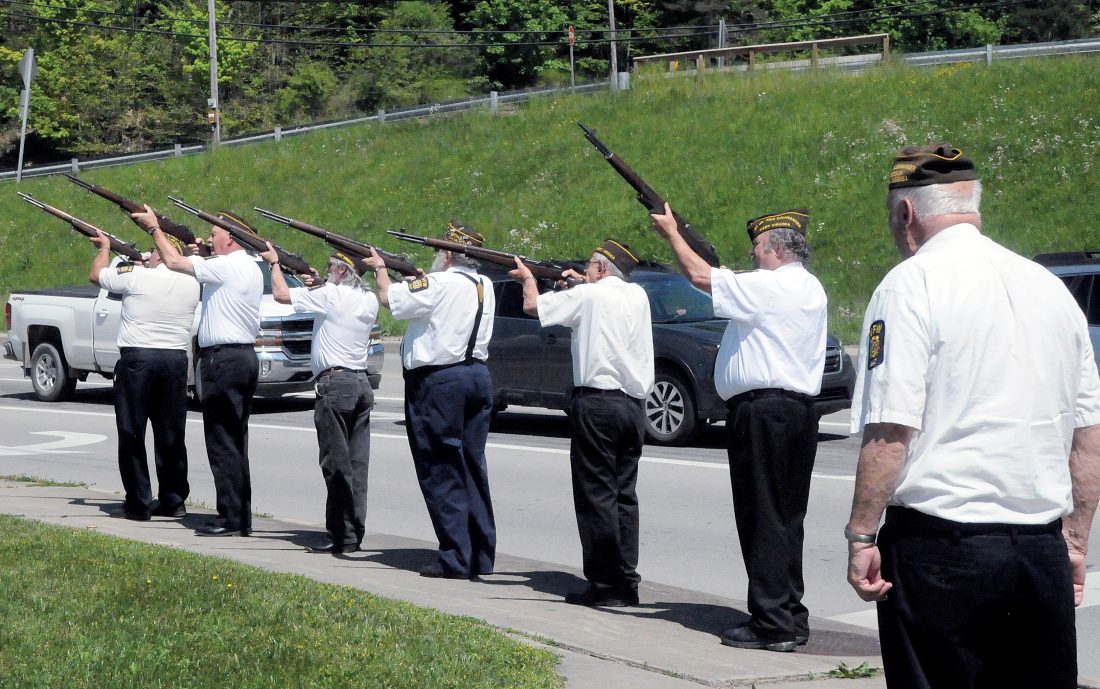 He said Memorial Day is special and everyone should take time to remember why they are able to celebrate the freedoms afforded to citizens and why they should never be taken for granted.

“More than ever we are shown how valuable those freedoms are,” he said. “Choosing our faiths and being able to worship; voting for and electing our leaders; practicing our freedom of speech; and our right to bear arms — none of this would be possible without the sacrifices of our veterans.

“I would like to take the time today to remember our veterans, the heroes who paid the ultimate price. Whether in war time or as a result of injuries or disease, shall we never forget your service to our country. Join me today, Memorial day, to paying tribute to the lives lost to protect us and our loved ones.”

Lambert served as keynote speaker for the event. He gave a speech prepared by the American Legion to be shared at Memorial Day events throughout the country.

“Every crisis has new heroes. During the 9/11 attacks, they were the first responders running into burning and crumbling buildings as others ran out. Now, during the coronavirus pandemic, the most visible heroes are the health care professionals, who are saving others and risking their own lives while doing so,” Lambert said. “These heroes have much in common with the people that we honor today — America’s fallen veterans. They are men and women who have sacrificed their own lives so others could live. They are both elite and ordinary. They are elite in the sense of character. Giving your life so others could live is the ultimate definition of selfless.”

Lambert said they are ordinary because the represent the diversity of the United States and that they come from all backgrounds.

“As we celebrate the selfless and untiring performances of the healthcare workers during the COVID-19 pandemic, it brings to mind the military medics, doctors and nurses who sacrificed their lives while treating others on the battlefield,” he said.

“The Navy Reserve corpsman was only 20-years-old when he landed on Iwo Jima 75 years ago,” Lambert said. “On March 3, 1945, James Naughton, a Marine in Williams’ unit, was wounded by a grenade. While under intense enemy fire, Williams dragged Naughton to a shallow depression and treated his wounds. Williams used his own body as a screen and was shot four times. Yet he continued.”

Lambert said after Naughton was treated, Williams dressed his own wounds then helped treat another Marine.

“While heading to the rear, he was hit by a sniper’s bullet and killed. For his actions, Petty Officer Williams was awarded the Medal of Honor,” Lambert said.

He also shared the story of Army veterans like Lieutenant Sharon Lane.

Lambert said according to her biographer, Philip Bigler, Lt. Lane threw herself into her work as a nurse. While serving in Colorado, she requested a transfer to Vietnam.

“Her dedication was obvious, even as she treated enemy Viet Cong soldiers who would return the favor by kicking, cursing and spitting at their American captors,” Lambert said. “In the early morning of June 8, 1969, Sharon’s tour of duty ended. A Soviet-built rocket struck the hospital. Lieutenant Sharon A. Lane was killed in action at age 25.

“If she were still here, her skills as a nurse might still be benefiting us during the current crisis. But not all of the heroes working during the COVID-19 pandemic are in the healthcare industry. Grocers, first responders, delivery workers and drive-through restaurant employees are just a few of the many people that we rely on to provide vital services for society while risking their own safety.”

Lambert said not all have died from enemy fire.

“Some have died from diseases that have too often festered around war zones. Often times, deaths from disease and accidents outnumbered casualties caused by enemy weapons,” Lambert said.

He shared the story of 60 soldiers of the all-black 24th Infantry Regiment in the Spanish American War, He said they volunteered to serve as nurses and 36 of them would die of yellow fever or malaria.

“A generation later, the flu would kill nearly16,000 U.S. soldiers in France during World War I. Another 30,000 American service members died in stateside camps,” Lambert said. “These men and women could have isolated safely in their homes. But they knew they had an important job to do. A mission to accomplish. They were all on a mission to serve.”

Lambert said even when the enemy is an invisible virus or a microscopic germ, the sacrifices made are just as meaningful.

“The U.S. military has already lost service members to COVID-19,” Lambert said. ” This Memorial Day as we continue to honor those who fell for us in battle, let’s also pause to remember those who have also sacrificed their lives while serving others.”

Two wreathes were placed at the All-Veterans Memorial in remembrance of those who passed. The VFW Post 3647 Firing Squad and the American Legion Post 29 Honor Guard were both on hand for the service. Taps was played by VFW Post 3647 Buglar Roy Teets.