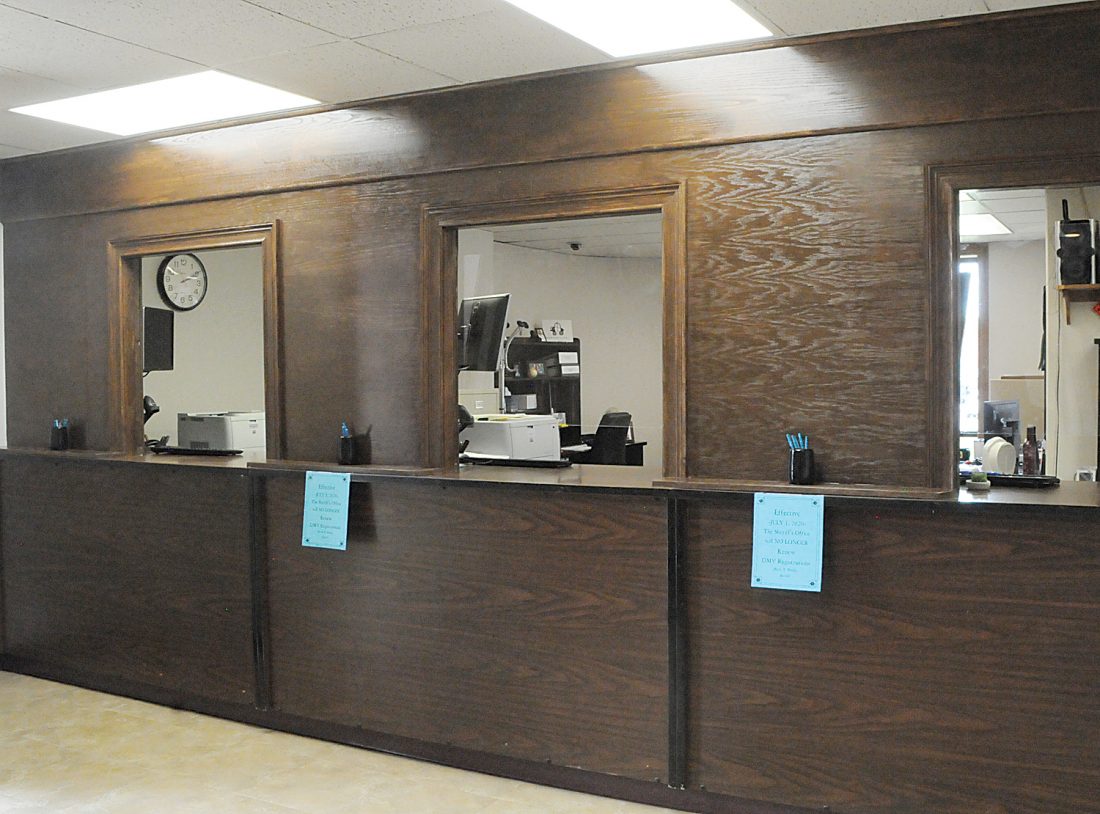 The Inter-Mountain photo by Haley Gordon Updates at the Randolph County Courthouse include a permanent barrier with windows in the Sheriff’s Office for the safety of staff and the public.

“We are doing as many hearing as possible through Skype or Polycoms from the jail,” Circuit Court Judge David Wilmoth told The Inter-Mountain Monday. “Most of the criminal things will be done that way. Civil cases can be done the same way. When people are present they will have to wear a mask.”

Wilmoth said the online hearings feature the attorneys taking part from their offices, while inmates remain at the jail.

With court systems opening Monday through the state, several steps have been taken locally to help keep the court case load flowing in a safe fashion. In addition to having as many hearings as possible online, Wilmoth said the court has new requirements when people must appear in person.

“We have social distancing in place and we are disinfecting after every hearing,” Wilmoth said. “We are keeping people separate as much as possible.”

Wilmoth highlighted the changes in a memo that was sent out to attorneys practicing in the 20th Judicial Circuit. According to the guidelines, litigants that attend in person are to remain outside the courthouse and be called individually to the hearings to help reduce the number of people in the courthouse. Anyone appearing in court, and the public entering the courtroom, will be required to wear a mask.

“Public access is allowed for the hearings that are open to the public,” Wilmoth said. “They must wear a mask to sit in the gallery.”

Wilmoth explained public seating is limited based on the size of the courtroom. He said the gallery can safely sit around 30 to 35 people with the social distancing rules in place.

According to the memo, most civil and criminal cases will be conducted online when possible, but defendants will appear for plea and sentencing hearings.

“I anticipate that all convicted defendants and their counsel will appear in person for sentencing, as I believe it is necessary for counsel and the defendant to be able to discuss in real time, and privately, things which could arise at that hearing. I prefer to have guilty pleas entered in person as well, for the same reasons. If you have concerns about this plan, please contact me to discuss how we can best address those issues,” Wilmoth wrote in the memo.

“Jury selections currently set for June 8, 2020, will be continued. The Court has prohibited jury trials until after June 29, 2020. We will again have a teleconference to schedule those trials as soon as possible.”

Wilmoth said the circuit court has been conducting online hearings f or about the last moth.

“Everyone has been able to access Skype,” he said. “This is going to be a new experience with the reopening. It is still a learning process.”‘

Wilmoth said he has instructed the staff of Randolph County Magistrate Court and Family Court to apply the same rules for their hearings.

“There’s been some changes made to provide additional safety to both our staff and also the public,” Scott said. “Anyone entering will see some differences in the courthouse. … The courts opened today and we provided the family court, magistrate court (and) circuit court with disinfectants, masks, face shields (and) spray sanitizer.”