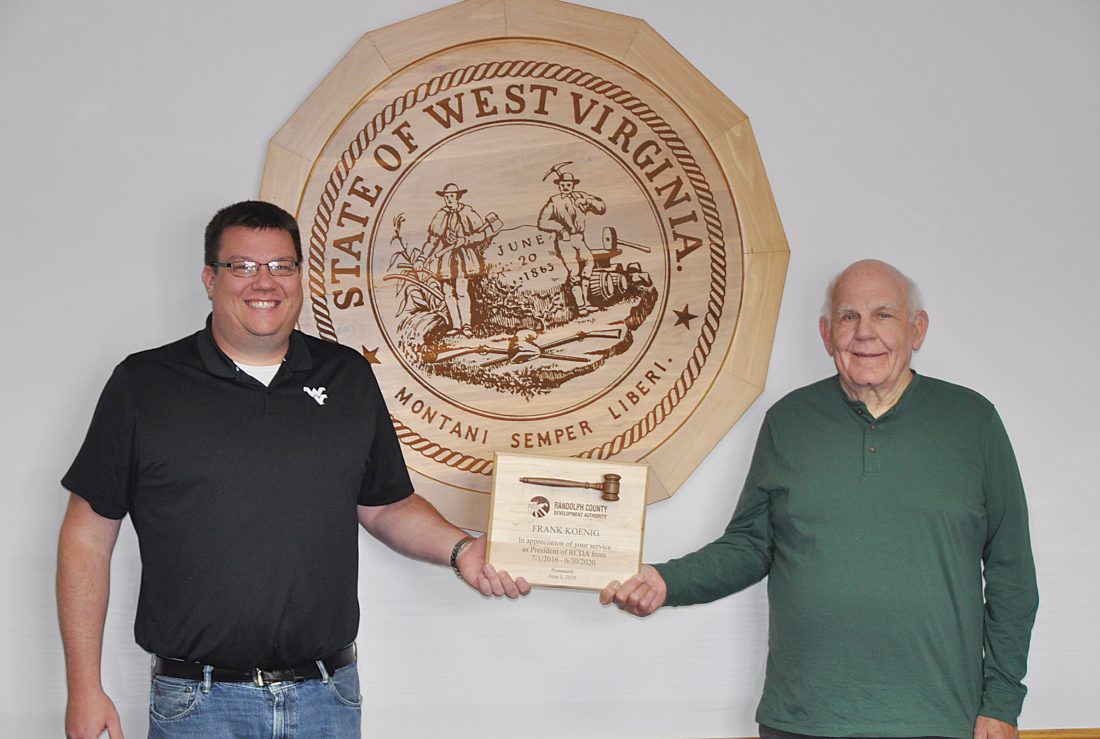 The Inter-Mountain photo by Haley Gordon Robbie Morris, executive director of the Randolph County Development Authority, left, presents RCDA President Frank Koenig with a plaque to commemorate and show appreciation for his four years of service.

ELKINS — The Randolph County Development Authority discussed their current financial standings and upcoming budget during their regular meeting on Wednesday.

“We have $233,000 out right now for the final payment of the Rail Trail and we’re awaiting reimbursement from the state on that,” he said. “We’re really hoping that comes in before the end of the fiscal year. It’s been processed out of Elkins’ District 8 office and (has been) down in Charleston for two weeks now so I’m anticipating that coming in any time.”

“Our marketable securities, that’s our investment portfolio, it’s actually made a little bit of a rebound here over the last couple of months, which has been welcome,” he said. We’re waiting for a quarterly payment from the Huttonsville property. Overall, a pretty good month even without Huttonsville.”

“We gave co-op members the option for the month of May. If they came in, even for a day, we charged them for the month but if they wanted to wait until June, then they could do that and they wouldn’t lose their spot in the co-op,” said Morris.

Regarding expenses, Morris stated that the RCDA will need to upgrade the software being used on machinery in the wood shop for the upcoming year.

“It’s an expensive software so that’s why you see the increase there,” he said.

“Even though the Development Authority is in a very strong position with their cash reserves, I think the feeling was that we need to keep those cash reserves at this point in time and not have any increases,” RCDA board member Mark Doak said. “We have a great staff. The three people we have are just outstanding. They more than deserve a significant increase, we realize that, but at the same time we know where we stand.”

Mike McCauley, training coordinator for the RCDA, mentioned that the wood shop had reopened and had seen “a good bit of people every day.”

“The shop’s back open now to everyone. Everyone’s paying their dues,” he said.

“I think over the last two months everyone sat around their house and thought of ideas because this week we’ve had people in there every day with all kinds of projects.”

Frank Koenig, active president of the RCDA, also commended the staff for keeping the building up and running during the COVID-19 pandemic.

“We switched to Zoom calls and had good participation in Zoom calls but Robbie, Kris (Wilmoth) and Mike kept everything running and reopened,” he said. “We’d like to thank everybody for getting that done.”

Wednesday was Koenig’s final meeting as President and he is not eligible for reelection. Koenig has served as board President since July of 2016. At the end of the meeting, Morris presented Koenig with a plaque to commemorate his time as president and to show appreciation from the entire board and staff.

“We really appreciate Frank’s leadership and that of the entire board,” Morris said. “You’ve done a great job. Frank’s been there when I needed to talk to him. On behalf of the Development Authority, we’d like to present you with this plaque in appreciation of your service as President of the RCDA.”

The next regular meeting for the RCDA is scheduled for Wednesday, July 1 at 4 p.m.