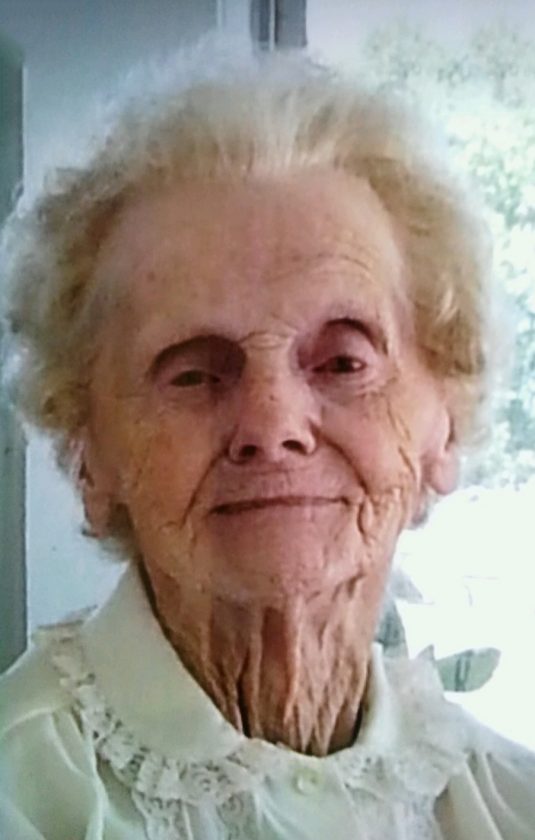 She was born August 18, 1920, in Buckhannon, a daughter of the late Lida Simpson and Mary Warner. On Dec. 9, 1939, she married Coleman Edward Wilfong, who preceded her in death on Sept. 27, 2002. She is survived by two sons, David W. Wilfong and wife, Deborah, of French Creek, and Lonnie Edward Wilfong of Buckhannon; three daughters, Mary Ellen Miracle of Palm Bay, Florida, Helen Jane Bennett of Statesville, North Carolina, and Linda Lou Jarrell and husband, Joseph, of Charleston; 10 grandchildren; 10 great-grandchildren; two great-great grandchildren; nine step-grandchildren and numerous nieces and nephews.

In addition to her parents and husband, she was preceded in death by one son, Robert Allen Wilfong; one daughter, Ruth Ann Hamilton; three grandchildren, Allen Wilfong, Edward Wilfong and Kimberly Schoenlein; one brother, Guy Simpson Warner; and four sisters, Hazel Burns, Gethrel Kiddy, Mabel Groves and Marie Warner. Mrs. Wilfong was a member of the Calvary Baptist Church in Buckhannon, a homemaker and served over 20 years as a senior companion. She was also an avid Mountaineer fan.

The family would like to thank the staff of People’s Hospice and Crestview Manor for their dedication and care.

Friends will be received Tuesday, May 14, 2019, from 11a.m. to noon at the Poling-St. Clair Funeral Home. The funeral service will be held at noon from the funeral home with Pastor Michael Tallman officiating. Burial will follow at the Heavner Cemetery in Buckhannon.

Online condolences may be made to the family at www.polingstclair.com.

Poling-St. Clair Funeral Home is in charge of the arrangements.