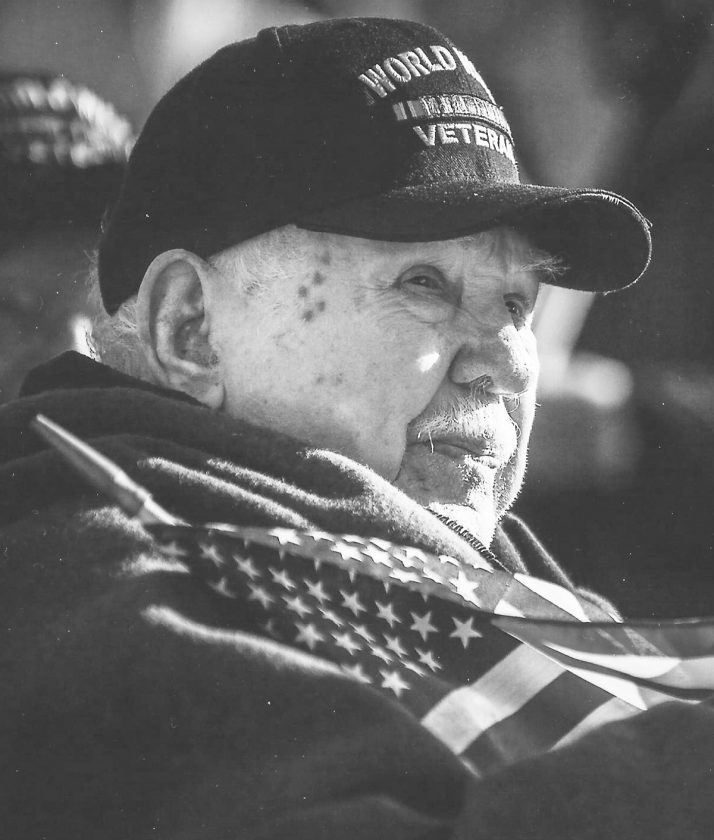 Graveside services for him are scheduled for 10 a.m. on Saturday, Feb. 15, which would have been his 101st birthday, at the Odd Fellows Cemetery in Georgetown, Texas. A reception will follow at the Ramsey Funeral Home, 5600 Williams Drive, in Georgetown.

D.G. Mayes was born in 1919 on the family farm near Pontotoc, a village in Llano County, Texas. He was the oldest son of long-time cowboy Gordon Mayes and Snow Hoover Mayes, the daughter of the only medical doctor for miles around.

Growing up, “Dougie” picked cotton, plowed fields, milked cows, and worked cattle. He became a crack shot with a .22 rifle and brought home squirrels as needed for the family supper. He was always interested in how things worked, and he learned enough about the Model T to keep the family car running. He graduated from Hutchison High School in nearby Field Creek and joined the Army at the age of 18. Although in three years he rose to the rank of corporal as the company clerk, D.G. always wanted to join the Navy.

He was on his way to see a Navy recruiter in Dallas when he stopped in Georgetown to visit his uncle, who worked in an office at the county courthouse. It was there he met his future wife, Mary Josephine Logan.

D.G. had been in the Navy a little more than a year, and was a radioman aboard the USS Solace, a hospital ship, when the Japanese attacked Pearl Harbor. The Solace was anchored some distance behind Battleship Row, and D.G. remembers seeing the great ships’ masts perfectly aligned and then minutes later turned terribly askew. The Solace treated many wounded sailors, scores of them badly burned from oil fires on the water.

During the rest of the war, D.G. served as chief radioman aboard a tanker, the USS Enoree, a ship that earned seven battle stars for support efforts in some of the major battles in the Pacific, including Saipan, Iwo Jima and the Battle of the Philippine Sea. He said the scariest times were when he would receive two numbers from the bridge. They were the ship’s current latitude and longitude, the position he would have to send out as an SOS if the ship, now in danger, came under attack.

When D.G.’s ship docked in New York City after convoy duty in the Atlantic, Mary Jo took the train there to marry him on Oct. 11, 1943.

After the war, D.G. served on three destroyers and a tugboat, led the construction of a naval radio station in Grondal, Greenland, and served as chief-in-charge of communications for the Navy Department in Washington, D.C.

After he retired with the rank of chief petty officer from the Navy in 1957, he became an intelligence analyst for the Radio Corp. of America, and moved from the Washington, D.C., area to Ohio, where he worked at Wright-Patterson Air Force Base near Dayton for 20 years. He had a top-secret clearance and researched the communications and electronic capabilities of the Soviet Union and its satellites.

The Mayes retired in 1980 and moved back to Texas to a farm near Jarrell, where they raised cattle, chickens and a large vegetable garden. He bought and sold rent houses in Georgetown, took pride in fixing all things mechanical, and enjoyed playing 42. In 2008, they moved to Georgetown, where Mary Jo died six years later. They had been married for 71 years.

He and Mary Jo had four children, all of which survive him: son Dave Mayes of Bryan, Texas; daughter Linda (Jesse) Brown of Arvada, Colorado; daughter Patricia Mayes (Dave Cutlip) of Beverly; and son John (Cindy) Mayes of Gresham, Oregon. He had two grandchildren: Logan (Sadie) Mayes of Cedar Park, Texas, and Sarah Mayes of Bryan, Texas. He was also survived by many nieces and nephews.

D.G. was proud of his children and grandchildren and loved his family. He delighted in family reunions and gatherings with his old Navy shipmates. He loved telling stories about his days growing up in Pontotoc and the comical things that happened aboard the Enoree and the six other ships he served on. He wrote them all down and filled several notebooks with tales of his adventures.

He was preceded in death by his parents, brothers Sam Mayes of Marble Falls, Gordon (Chub) Mayes of Jarrell, sisters Clara Blanche Mayes of Pontotoc, Snow Barber of Georgetown, Bonnie Hensarling of San Antonio, Nora Rigby of Plano, and half sister Nola Beasley of Ozona.

In the last year of his life, D.G. moved to Bryan to live with his son Dave.

In lieu of flowers, the family requests that donations be made to Honor Flight Austin, https://www.honorflightaustin.org/, which serves veterans by bringing them at no cost to Washington, D.C., to view memorials established in their honor.