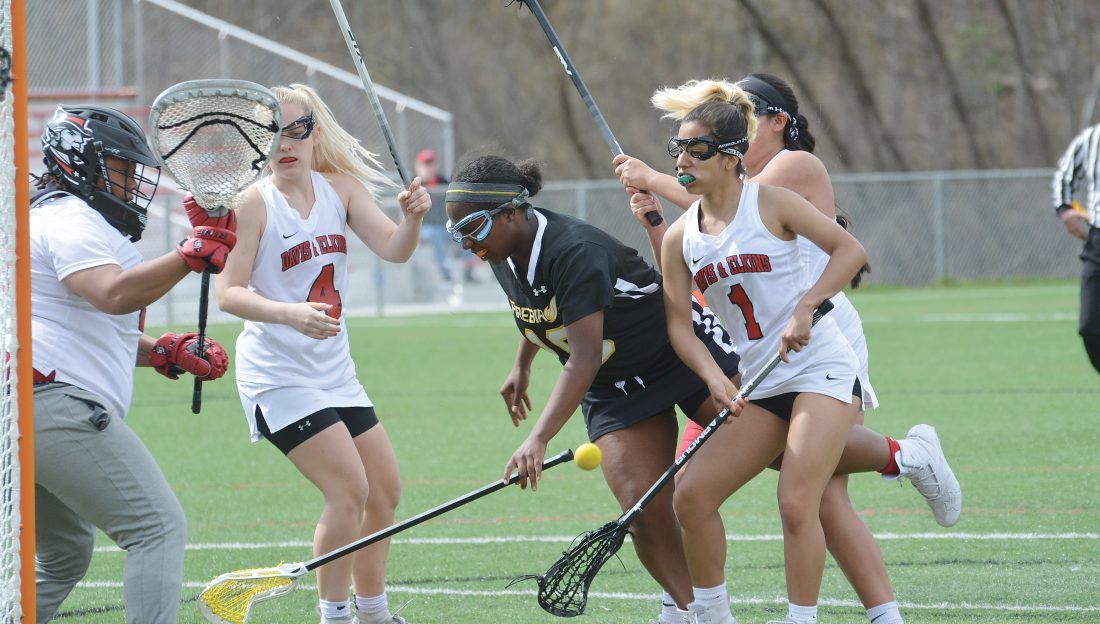 The Inter-Mountain photo by Edgar Kelley Davis & Elkins defenders converge on a District of Columbia player Wednesday at Nuttall Field. The Lady Senators claimed a 14-6 victory.

ELKINS — Ryann Sumner scored five goals to help power Davis & Elkins College to a 14-6 win over University of the District of Columbia Wednesday afternoon in non-conference action at Nuttall Field.

Four of Sumner’s scores came in the first half alone as the Lady Senators, who improved to 9-3 on the season, stormed out to a 9-1 lead at intermission.

Angelina Horan had four goals in the contest for D&E and helped contribute to the first-half fireworks with three goals through the first 30 minutes of play.

The Lady Firebirds’ Kianna Franklin, who had the lone goal of the first half for the visitors, opened the scoring to start the second half as her goal just 2:53 into the half cut the Lady Senators’ advantage to 9-2.

But four straight goals by D&E, two from Seana Soika and one each from Surelys Baez and Horan, extended the lead to 13-2 and all but sealed the win.

The Lady Senators held a 37-10 advantage in shots, including a 21-1 edge in the first half. Ebela De La Bay Coffie had four saves in net for the hosts.

Franklin and Amy Rock had two goals each in a losing effort for UDC.

Davis & Elkins will return to action Friday when the Lady Senators travel to Findlay (Ohio) for a key Great-Midwest Athletic Conference matchup.

Findlay currently sits atop the conference standings in a tie with Tiffin with a 3-0 league mark.

Davis & Elkins enters the 4 p.m. contest with a 1-1 record in G-MAC action this spring.