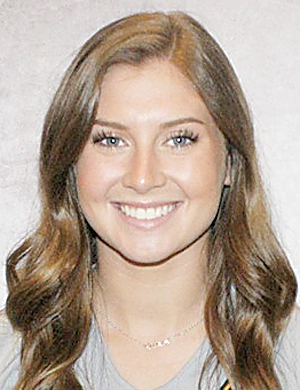 The conference championship game was won with a 5-3 win over familiar foe Concord at Salem International University in Harrison County. Collett smacked in the winning run with an RBI double.

After that win for the “Lib”, the Hilltoppers hosted their first ever Atlantic Regional tournament last Thursday through Saturday.

West Liberty came up just short of a region title with a 3-0 loss to the Shepherd Lady Rams in the finals after battling back out of the loser’s bracket.

“We made it a goal this year to make it to the MEC tournament and we put in so many extra hours of work that definitely paid off,” Collett said.

“We never imagined we would win right off the bat, but we just kept believing in each other and never gave up. West Liberty is a second home to me and the softball team is a family. We would do anything for each other on and off the field.”

West Liberty slugged it out with two- time national champion Lock Haven in a 15-inning marathon contest to fall 7-2 in the next round. The Hilltoppers tied the game at 2-all in the sixth before Lock Haven broke the game open with five runs in the top side of the 15th. Collett produced a run scored and a stolen base over that time.

Taking on Concord again on Friday, Collett nabbed two RBIs, including the go-ahead and winning run with an RBI single that put WLSU on top for good en route to a 6-2 verdict.

The Lady Hilltoppers drew Lock Haven again on Saturday, having to go through the two time champs in order to get a shot at the region belt. West Liberty prevailed with an 8-2 decision, while Collett contributed with a one out double and a run scored.

Collett followed in her big sister’s footsteps as Madison Collett has now completed her under-grad at West Liberty and is now studying law at the master’s level degree.

Both Lady Tiger products are the daughters of Russ and Sherri Collett.