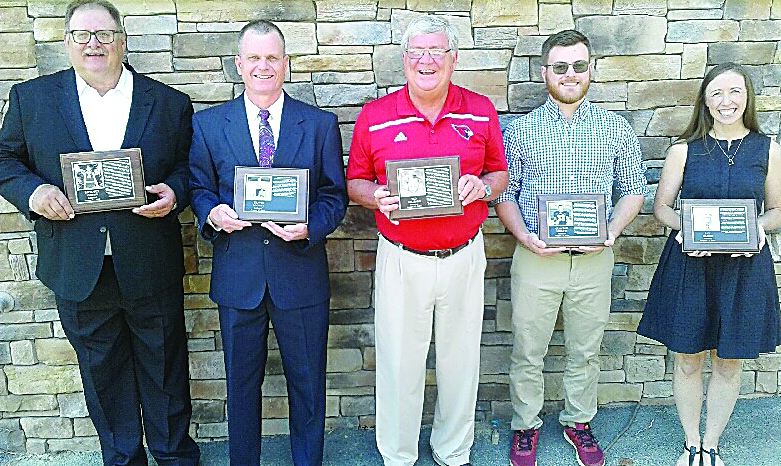 The Inter-Mountain photo by Chad Ware Six new members are inducted into the Randolph County Athletic Hall of Fame on Saturday. They include, from left to right, Richard Varner, Travis Looney, Ted Williams, Clayton Collett and accepting for Jay Dailer, his daughter, Megan. Not pictured, J.R. Calain.

It was the 26th induction ceremony.

Williams was instrumental in coaching a variety of sports, as well as serving as an athletic director throughout Randolph County since 1976.

His coaching career began at Tygarts Valley Middle School in basketball from 1976-1982.

Then, from 1982-1986, Williams moved up to Tygarts Valley High School, coaching basketball and garnering sectional and regional championships as well as leading the Bulldogs to their first state tournament appearance in 1984.

He was also busy coaching football at TVHS from 1977-1998. In 1989 and 1992, as head coach, Williams produced Potomac Valley Conference champion teams and earned conference coach of the year accolades.

He also led these teams to the state playoffs.

Not to sit idle, Williams coached baseball from 1985-1994, producing sectional and regional champions throughout those years.

Williams’ coaching abilities extended into Bulldog boys and girls track and field from 1994-1999.

In those years, he garnered several conference championships and conference coach of the year honors.

He led the Tigers to many sectional and regional championships as well as being honored as NCAC Coach of the Year in 2010.

As an athletic director and coach, Ted Williams was instrumental in completing many athletic projects at both TVHS and EHS.

He was selected in 2001 as Athletic Director of the Year by the National High School Athletic Administrators of West Virginia.

Looney was a kicker for the Elkins High School football team from 1979-1980.

He was known as a soccer-style kicker, and there was no organized soccer team at that time at Elkins High School.

He won several games for Elkins High School with his leg, including the game against Liberty-Harrison (their quarterback was current Texas A&M coach Jimbo Fisher) in 1980 and against Lewis County in 1979.

In 1980, Looney kicked 20 extra points and was 3 of 8 in field goals. He was honored on the All-Big 10 Conference first team, All-Mon Valley team and was a second-team selection of the Class AAA all-state squad as a kicker.

He lettered in soccer, track and field and wrestling.

However, his highest athletic achievements were in his wrestling prowess from 1988-1991.

As a wrestler, his overall high school career record was 93-25-1. In the 112-pound weight class, Calain lettered all three years.

He earned 22 pins and was named team captain his senior year.

In 1989, as a sophomore, he placed third place in regionals as well as being declared NCAC championship status twice in 1989 and 1990.

In his junior year, Calain placed second in regionals. He was a three-time state qualifier from 1989-1991, with a fifth-place showing in 1990 and a third-place effort in 1991 at the state level.

Varner lettered in basketball from 1977-1979 at Harman High School.

His team placed second in the Little Mountain Conference his junior year with a record of 16-5, along with a record point spread of 47 points.

With this being Varner’s first year of organized basketball, he soon made his mark as a power forward and center.

He was the third leading scorer that season, behind Cliff Judy and Rich Carr, averaging 15.8 points per game. He was the leading rebounder with 11 per game.

Performing seven double-doubles and scoring in double figures in all but one game, Varner had a very productive junior year.

In 1978-1979, his senior year, his team was first in the Little Mountain Conference, recording 12 straight wins and setting the largest point spread of 51 points.

This team also set a school record by averaging 78 points per game.

As an individual senior player, Varner again led the squad in rebounding with 11 per game, averaging 16 points per game, garnering nine double-doubles and scoring 20-plus points in six games.

During the game against Union, Varner scored 28 points and had 22 rebounds.

He scored a season total of 362 points his senior year.

To his credit, he earned first team All-Conference honors and was appointed to the All-Tournament team.

After high school, Varner continued his love of basketball by becoming a WVSSAC basketball official for several years.

As a player, he participated in back-to-back playoff appearances.

In 2011, his team went 8-3 as Collett scored 22 touchdowns, including a record-high six touchdowns against Philip Barbour, and scored a season-high 136 points.

The 2011 Tigers participated in the state playoffs, were ranked sixth in Class AAA and finished second in the Big 10 Conference.

Collett was named to the first team on the All-State squad as a utility back as well as being honored on the first team of the All-Big 10 Conference team as a running back.

He also holds a state playoff record for the longest interception return for a touchdown — 99 yards vs. Hurricane in 2011.

Included in the accolades from 2011, Collett also received the United States Army Iron Man of the Year from West Virginia.

His team went 7-4, making the state playoffs and ranked 13th in triple-A.

He scored 18 touchdowns that year, with a season high of 128 points.

Collett averaged 92 yards rushing per game in his career, had 307 carries for 2,818 yards and scored 44 touchdowns.

In his Tiger career, he was one of three players to have two 1,000-plus yard seasons, along with Rick Lester and Daniel Romans.

In 2012, Collett was named team captain, along with scoring a team-high 286 total points.

He holds the current record for all-purpose yards at 4,177.

Dailer coached both girls and boys basketball at Elkins High School from 1980-1986.

Dailer was also instrumental in producing three straight 20-win seasons as the Elkins girls made back-to-back state tournament appearances in 1981 and 1982.

They were state runners-up in 1982 as well as setting a school-record of 25 wins that same year.

During Dailer’s coaching career at EHS, there were two girls and one boy who were named to the first team all-state.

As with any great coach, the players abilities are not without noting — four players scored 1,000 points in their high school careers under Dailer’s guidance. They were Basil, Becky Vance, Wendy Matthew and Shepherd.