PB boys open on the road 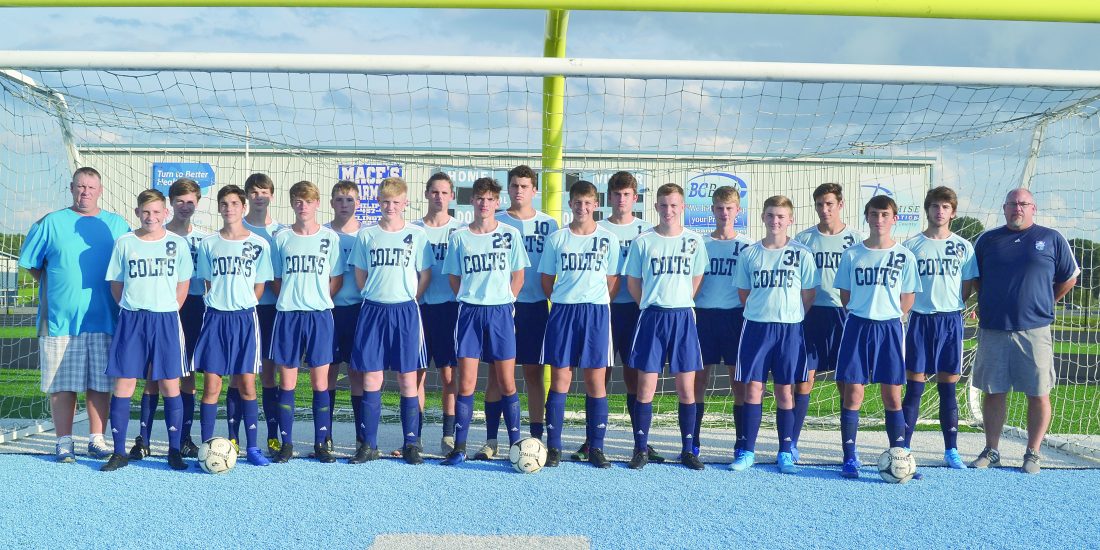 The Inter-Mountain photo by Tony Baisi The Philip Barbour High School boys soccer team travels to Williamstown today to open the 2019 campaign. The Colts will make their home debut on Sept. 5 against Robert C. Byrd.

PHILIPPI — Philip Barbour had a winning record of 9-7-1 last year after ending the season with a heartbreaking loss still on the players’ minds.

The contest showcased a classic effort from both PB and the Minutemen. After two overtime periods could not separate the two Big 10 Conference foes, the final decision fell in favor of Lewis County during the penalty kick phase to follow.

With 18 players on the roster, Will Gregory is entering his second year as the Colt mentor, and said things are going pretty decent so far for PBHS.

The team traveled to the northern panhandle last weekend for some scrimmage action at Brooke High School.

“Everything is going well, the boys are working hard, they seem to get along,” he said. “We did very well I felt at Brooke. Everybody played a lot of time. We played Oak Glen in our first match and did very well.

“Then we played Wheeling Park to a tie, they are a really big good triple-A program. That effort showed a lot, and our younger guys finished that match. Then we played a really close game with Brooke that we probably should have won, but it was practice.”

Gregory noted that all players are expected to make an impact while engaging in bettering themselves at the sport.

“We want to possess the ball with an intent of creating something,” the coach said. “We don’t want to just get it and boot it. We really want to work at moving the ball together as a unit. Everybody needs to have the technical ability to touch it, handle it, and to get into space and distribute it accordingly with everybody involved, not just two or three players.

“It’s important that all of them (players) do something,” Gregory said. “When you have six seniors that are returning lettermen, and everybody’s doing well, my expectation is that in every match you’re going to be thrust into a role and you need to take care of that responsibility.

“We have guys like Noah Ward and Caleb Shipley up top that really cause a lot of problems for people,” he said. “Then you have guys like Trenton Whited, Ethan Gregory and Ammon Davies in the middle that can really grind and just help maintain possession.”

The backline and keeper spots on the Colt defense are also important for a complete game on the pitch.

“The back is really anchored by three upper classmen,” Gregory said. “You have Trey Riffle, Hunter Ware and Trevor Schoonover. Cody Cooper is our number one keeper. Last year he was a freshman and had never played soccer before.

“He is fearless and I expect him to be an all-conference keeper by the time he’s done here.”

Philip Barbour will open on the road today at Williamstown.

The Colts will be at Weir on Tuesday, and host their home opener at 8 p.m. on Sept. 5 against Robert C. Byrd.