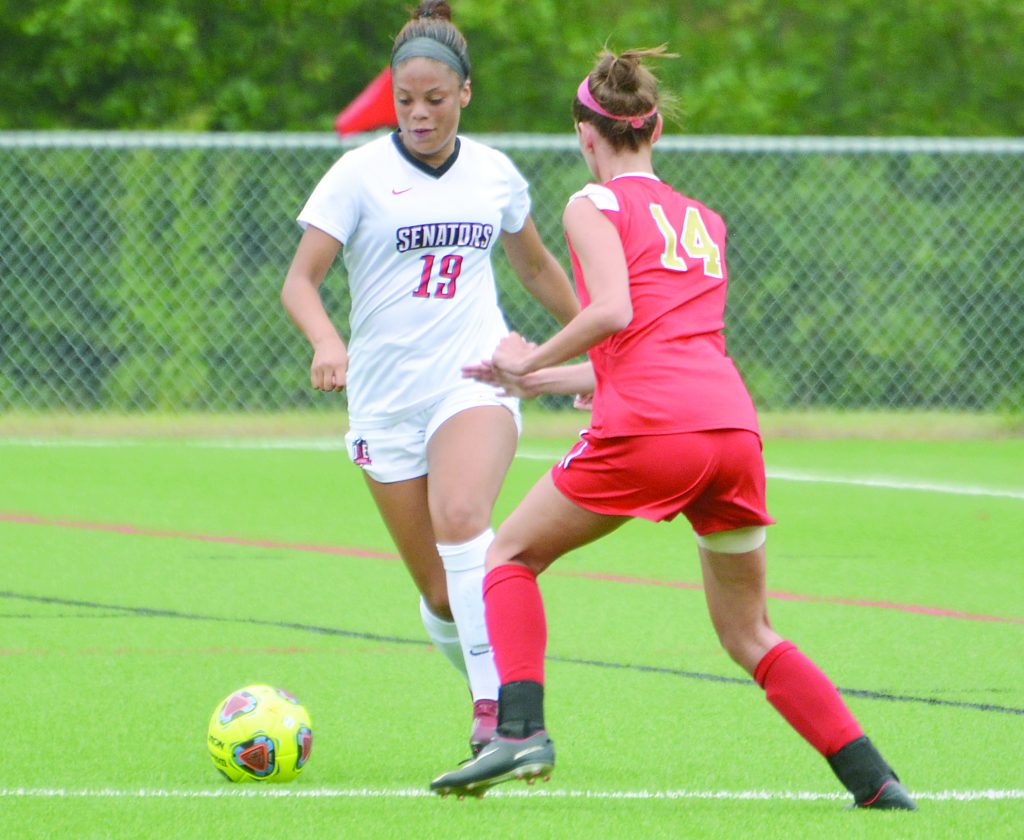 The Inter-Mountain file photo D&E Chelsi Jadoo is the MEC’s Defensive Player of the Week. The senior from Ajax, Ontario, helped lead the Lady Senators to a 4-1 win over Caldwell on Sunday.

Jadoo, a senior from Ajax, Ontario, helped the Lady Senators to a 4-1 win over Caldwell in their season opener. She helped organize a defense that allowed eight shots on the day, with just four coming inside the 18-yard box.

Bell, a freshman from Brampton, England, scored four goals as Concord opened the week with a pair of victories. She tallied the game-winner in the 83rd minute to lead CU to a win over Seton Hill and then scored a hat trick as the Mountain Lions rolled past Salem.

Favero, a senior from Sao Paulo, Brazil, had an assist on two of Notre Dame’s three goals last week.

In the win over Davis & Elkins, the reigning MEC Player of the Year provided the game-winning assist early in the second half to help the Falcons record three points in their conference opener.

Brown, a junior from Warren, Ohio, had a pair of clean sheets in a 1-0-1 week for the Mountain Lions.

He notched six saves in a 1-0 win over King in the season opener, and then turned away five shots against Frostburg State in a scoreless draw against the Bobcats.

Brant Grisel (UC), Dustin Crouser (WVSU) and Justin Watts (GSC) earned MEC Player of the Week honors for their play in the first week of the season.

Grisel, a senior from Apex, North Carolina, set a school-record with 367 yards as the Golden Eagles knocked off No. 25 Fairmont State, 42-39, last Thursday night. He completed over 70 % of his passes (19 of 27) and tossed three touchdowns with no interceptions in the win over the Falcons.

Crouser, a junior from Cross Lanes, recorded a MEC-high 14 tackles in a narrow 20-17 win over Frostburg State last Thursday night. Crouser had seven solo tackles, was in on a pair of tackles for a loss and broke up a pass. He also came up with a critical open-field tackle on fourth down in the fourth quarter to get the ball back to the WVSU offense leading to the game-winning score.

Watts, a senior from Atlanta, Georgia, was 4 of 4 on field goal attempts to help the Pioneers get past Alderson Broaddus, 33-21, on Thursday night. Watts hit two 26-yard field goals, and also connected from 32 yards and a MEC-best of 40 yards against the Battlers.

Additionally, Watts successfully executed a pair of onside kicks for the Pioneers, recovering one himself.