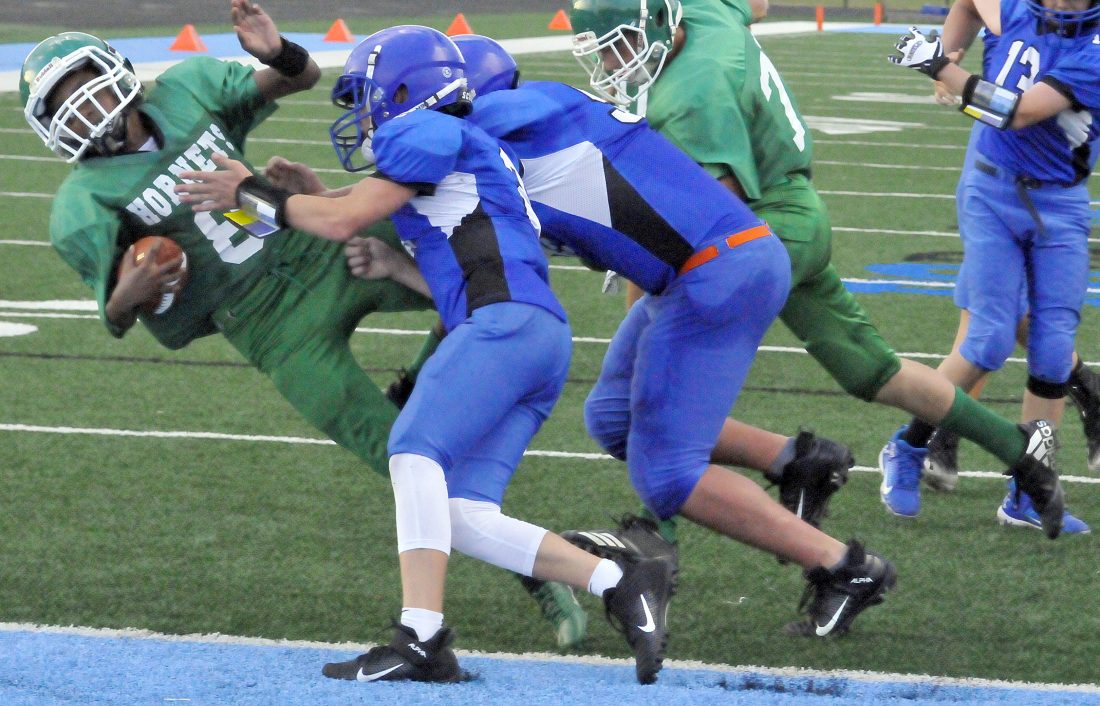 PHILIPPI — After Elkins Middle had jumped out to a 14-0 lead, Barbour Middle cut it to 14-6 with one second left on a first quarter clock at George Byrer Field at BC Bank Park Wednesday evening.

The EMS Hornets were on the march again, knocking on the hosts’ door from the Barbour 15-yard line, when lightning struck in the distance. WVSSAC officials and coaches immediately enforced player safety code and ushered the rival squads into the original field house at the Colts’ Corral.

As Philip Barbour’s soccer teams will be hosting Big 10 Conference opponent Fairmont senior today, Alderson Broaddus University will host the continuance of the middle school football game between Barbour and Elkins with a 6:30 p.m. start time on the Battlers’ campus.

Both teams are 0-1 on the season after Elkins dropped a contest on the road at B-UMS last week, and Barbour suffered a season opener loss at home to Taylor County.

Nate Hulver put Elkins in business right away Wednesday after a good opening kickoff return all the way down to BC’s 36-yard line. Hornet signal caller Anthony Anderson toted it 23 yards up the right hash to make it 6-0, and Isiah Merritt capped things off on the 2-point conversion for an 8-0 EMS advantage with only two minutes gone from the first quarter clock.

After a failed fake punt attempt by the hosts, Elkins scored again. Anderson hit Merritt for a downfield screen play with well-executed blocking that resulted in a 60-yard touchdown. The conversion attempt failed, leaving EMS ahead 14-0.

Barbour quarterback Kaden Humphreys took off on several runs that brought the BC offense to the EMS 15-yard line. Josiah Shanabarger then ran 8 yards to have the host inside the Elkins 10-yard line. Shanabarger churned his way into the north endzone for a 7-yard burst past the pylons before the conversion attempt was stopped by the Hornet defense.

Elkins will host its home opener on Wednesday at Wimer Field when entertaining Petersburg at 6:30 p.m. Barbour will be idle next week, and then travel to Pendleton County on Sept. 25.