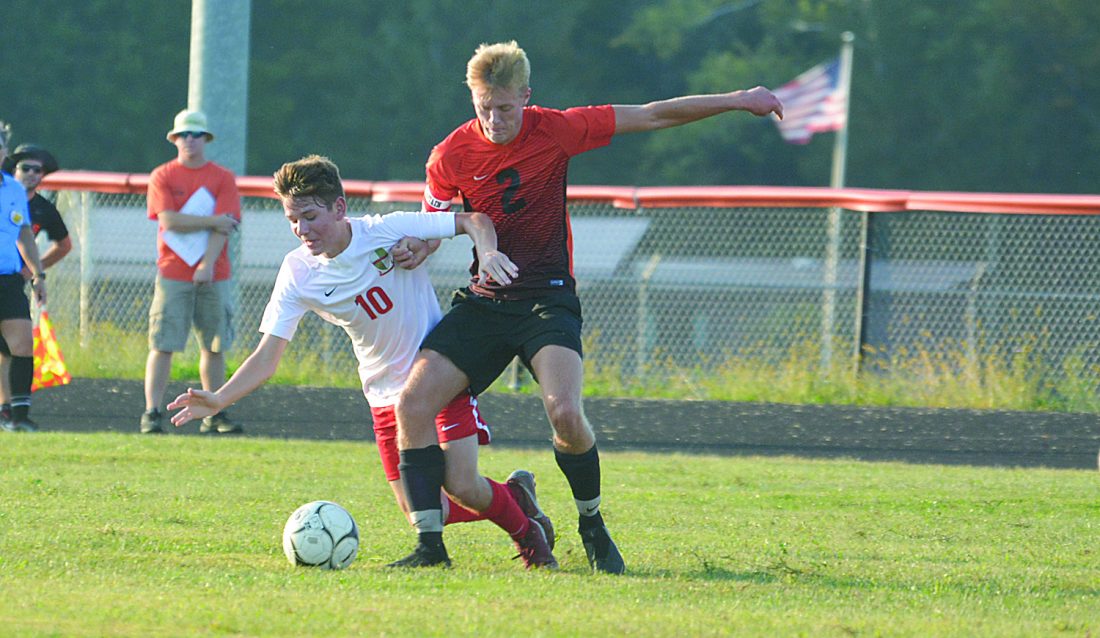 The Inter-Mountain photo by Edgar Kelley Elkins’ Devan Fletcher battles Musselman’s Ben Edwards for possession on Friday. The Tigers lost the match, 3-0, and will remain home today to face Oak Hill. The EHS soccer teams will also have chicken barbecue dinners for sale starting at 11 a.m. until sold out. Proceeds will benefit upgrades at the EHS field.

The Tigers (4-3) battled the Applemen to a scoreless deadlock at the half as both squads flexed their muscles on defense throughout the first 40 minutes of action.

Musselman struck early in the second half and pushed the deficit to 2-0 midway through the frame on a breakaway goal by Ben Edwards.

The Applemen, who held a 7-1 advantage in shots-on-goal in the contest, added a goal late in regulation to ice the victory. The visitors also had a 7-4 edge in corner kicks in the game.

“We just came out a little flat and couldn’t get anything going on the offensive end,” Elkins coach Michael Sfameni said. “I’m not sure if it was because this was our third game already this week and we were tired or what, but they (Musselman) had us chasing the entire game. We definitely need to pick up our play (today) because Oak Hill is going to be as strong as Musselman if not better.”

Despite falling on Friday, Elkins did run its Big 10 Conference record to 3-0 on the season with an 8-0 win over Lincoln on Thursday night. Austin Elliott and Devin Fletcher had two goals apiece for the Tigers in the win. Silas Cochran, Isiah Sigley, Keenan Ferguson and Aaron Elliott also tallied scores.

Elkins will return to action at 3 p.m. today when it entertains Oak Hill.