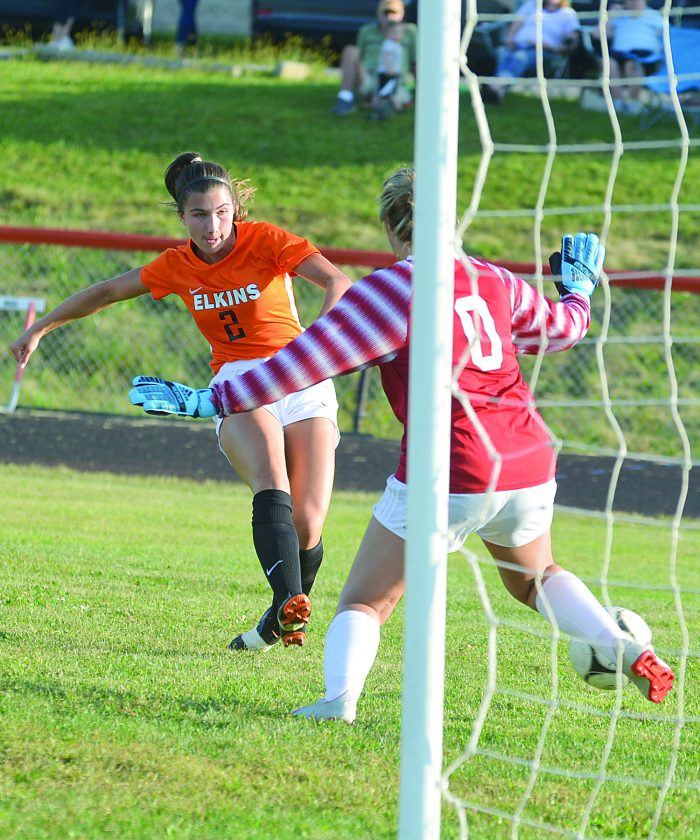 The Inter-Mountain photo by Edgar Kelley Senior Sofia Triplett puts a shot in goal against Liberty during the Lady Tigers’ 8-0 win Tuesday at the EHS field. Triplett had four goals in the victory.

Triplett opened the scoring barrage for the Lady Tigers (5-2, 2-0 Big 10) when she connected on a breakaway goal 10:23 into the match. Five minutes later, Triplett found the back of the net again for her second goal, giving Elkins a 2-0 cushion at the 24:48 mark.

Even before the halftime horn sounded, Triplett hit for a hat trick when she scored her third goal of the contest with just 5:23 left in the opening half of play.

Three minutes into the second half of play, Triplett scored her fourth and final goal that put the Lady Tigers in front 4-0.

“Sofia (Triplett) just keeps getting better each and every day,” Elkins High School coach Scott Cutright said. “With the way Liberty was playing a high defensive line, it was a game suited for Sofia. She just kept using her speed to get behind their defense.”

Isabella Karlen then scored back-to-back goals for Elkins to push the advantage to 6-0 midway through the second half.

Freshman Alexa Price then made it 7-0 with her first goal of the season and Anna Belan added the eighth and final goal off a free kick late in regulation.

“This was a good win for us coming off the Winfield loss over the weekend,” Cutright said. “I challenged them before the game to win individual battles and they did it all night long. We definitely played a much better game tonight.”

Elkins will return to action at 6 p.m. Thursday at Lincoln in more Big 10 play.