Senators get 1-0 victory over Cards 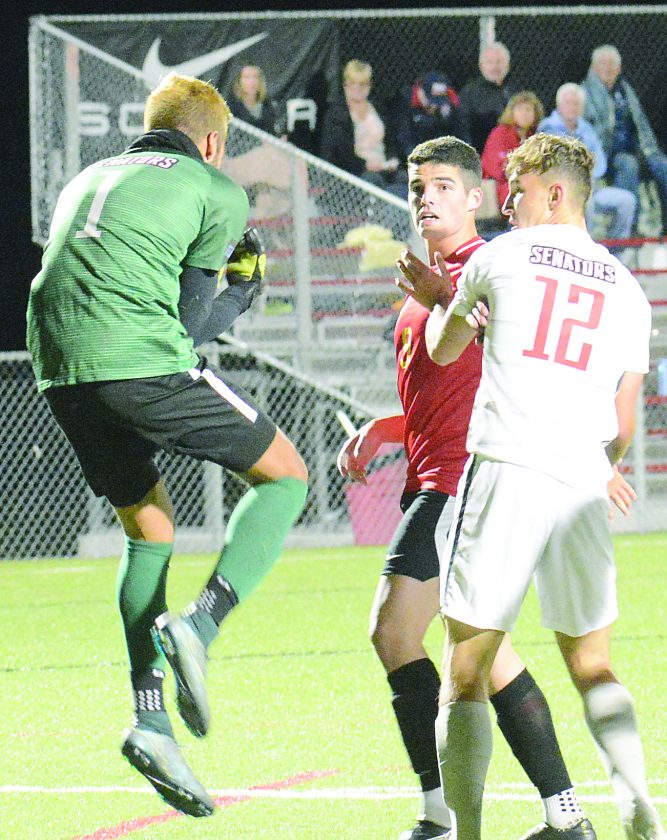 The Inter-Mountain photo by Joey Kittle Davis & Elkins College senior keeper Everton Carvalho comes out of the goal area to haul in a Wheeling shot attempt Wednesday night at Nuttall Field. Carvalho had a pair of saves in the Senators’ 1-0 MEC victory.

Victor Pires netted the game-winning goal in the 13th minute when his shot from eight yards out found the back of the Cardinal net of an assist from Jens Ovreseth.

The teams combined for just five shots on goal — three for the Senators and two for the visitors. D&E also led in corner kicks, 5-1.

Senior keeper Everton Carvalho recorded the shutout win in goal for the Senators, making a pair of saves.

James Serman had two saves for the Cardinals (1-8 overall and 0-7 MEC).

The Lady Falcons scored the game’s only goal in the 87th minute when Mackenzie Gillispie scored from six yards out off a free kick from Angelina Kaylor.

Fairmont State held a 5-2 advantage on shots on goal a 3-1 edge on corner kicks.

Katie Clarke had four saves for the Lady Senators, who saw their three-game win streak and stretch of three straight shutouts snapped.

Taylor Kennedy had four stops for the winners.