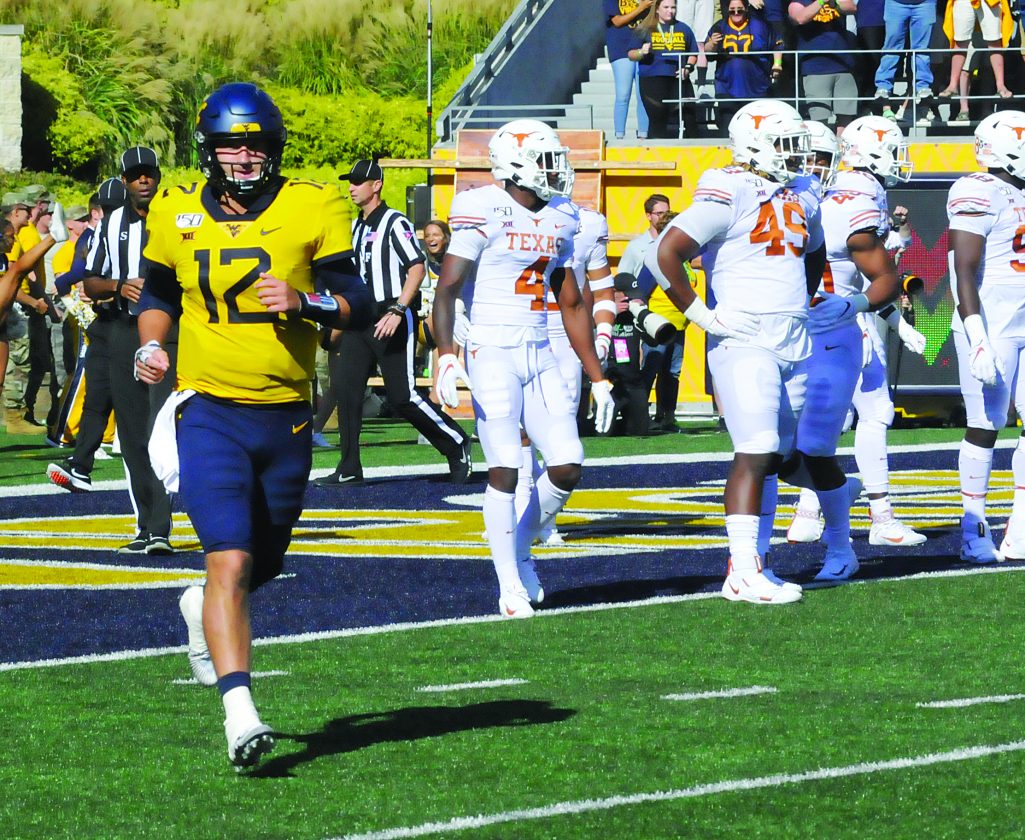 The Inter-Mountain photo by Tony Baisi WVU quarterback Austin Kendall returns to the sideline after throwing a first-quarter touchdown against Texas. Kendall and the Mountaineers will look to regroup from the loss to the Longhorns Saturday at home against Iowa State.

MORGANTOWN (AP) — Coaches and teammates are rallying behind West Virginia quarterback Austin Kendall as fans question his ability to lead the team following another multiple-interception game.

“We’ve just got to be consistent,” Kendall said.

Offensive lineman Colton McKivitz put his arm around Kendall as the players left the field after the junior’s four-interception performance in a 42-31 loss to Texas on Saturday.

“Austin’s my guy,” McKivitz said. “Anything I can do to help him know that we’re going to be behind him no matter what. You have bad games as a player. I know a few guys said they’re pretty upset at their performances. It’s a tough game to lose. But overall, you can’t let this game affect next week.”

Kendall had never played a complete game in college before this season while backing up two Heisman Trophy winners at Oklahoma.

He’s had had to learn a new system at warp speed since joining the Mountaineers in January under first-year coach Neal Brown.

Brown chooses to amplify the positive side of Kendall, who is completing 67% of his passes and twice has thrown for three touchdowns in a game, including against the Longhorns when he had a career-high 367 yards and also scored on a 1-yard run.

For the popular coach, sticking with Kendall may be an unpopular choice. Fans on social media implored Brown to make a change after Saturday’s loss.

Kendall might be the only true option at this point.

Junior Jack Allison attempted two passes in a loss at Missouri and one of them was intercepted. Redshirt freshman Trey Lowe played briefly against Missouri. Brown has said he plans to redshirt Jarret Doege, a Bowling Green transfer who has played in 19 games.

Brown said Kendall, who completed 31 of 46 passes against Texas, “gave us a chance” to win.

“When you throw the ball that many times you put yourself at risk for some turnovers,” Brown said. “I thought at times he played as well as he’s played all year.”

Cyclones coach Matt Campbell is equally as complimentary about Kendall.

Kendall said it’s satisfying to have his team’s backing.

“I had no doubt that they’re still behind me,” he said.

Not all of Kendall’s interceptions have been his fault. Brown said some wide receivers either had the chance to catch the ball or ran the wrong route.

Still, three of the picks Saturday led to Texas touchdowns.

Wide receiver T.J. Simmons said Kendall’s mistakes stick out because quarterbacks in general are in the spotlight more.