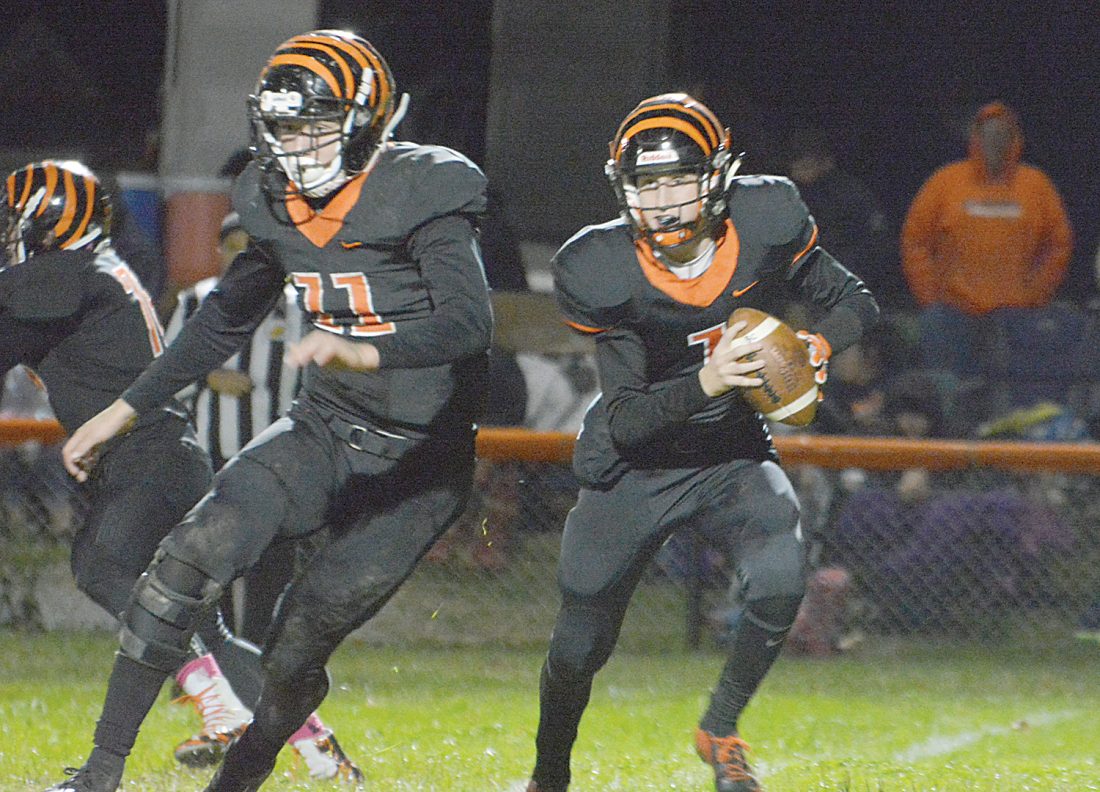 The 2019 high school football season at the Class AA level, meanwhile, was crowded with record-setting performances on both sides of the ball.

Two players though at positions that generally don’t garner a lot of statistics earned their way into many “best in the state” discussions thanks to their dominance in the trenches.

This year’s first-team offense has 16 spots rather than the usual 15 as Roane County’s Alex Miller was named an honorary selection.

Miller, a senior receiver/defensive back for the Raiders, died after collapsing on the sideline during a Sept. 13 game against Clay County.

“On behalf of our school, the football team, his family and the community I just want to say how much we appreciate this honor for Alex,” Roane County coach Paul Burdette said. “Alex would be proud and he deserves it.

“The outpouring of love and support we have received for Alex from the entire state has been unbelievable. It makes me proud to call West Virginia home.”

Frazier and Martin have shared a bond throughout their high school years as Fairmont Senior and Bluefield each won a state title against the other in 2017 and 2018. And this season, the Beavers defeated the Polar Bears in the semifinals. The two seniors are also two prized recruits for WVU, both passing on multiple Division I offers to stay in state and become Mountaineer teammates.

Payne, a junior and first-team running back, ran for 2,883 yards and set a new state record for scoring with 52 total touchdowns, including 49 on the ground.

Hatfield, a senior and first-team receiver, established new state records for receptions with 124 and receiving yards with 1,870 to go along with 20 touchdown catches.

Lemley, a senior and first-team defensive back, had 101 tackles and established a new state record for interceptions with 14.

The Golden Tornado had a pair of players on the offensive line in the senior duo of Dalton Ray and Don Woodward. They were joined by senior linebacker Jackson Biser (83 tackles, 16 TFL, 4 sacks).

Jenkins paved the way for teammate and fellow first-teamer in junior Caleb Bower, who finished with 2,034 rushing yards and 26 touchdowns.

Also selected at running back was Bluefield senior JJ Davis, who ran for 1,923 yards with 27 rushing touchdowns as well as two receiving touchdowns and a punt return for a TD.

Joining Hatfield as a receiver is Clay County senior Logan Vance, who led the state in receiving touchdowns with 21 while catching 61 passes for 1,280 yards.

Fairmont Senior junior Gage Michael is the first-team quarterback after a breakout season that saw him throw for 2,390 yards with 27 touchdowns as well as running for 1,553 yards and 22 touchdowns.

Dual-threat QBs is the theme at two of the offensive utility spots in Mingo Central’s Daylin Goad and Winfield’s Nick Vance. Goad, a junior, threw for 3,446 yards and 30 TDs while running for 990 yards and 21 scores. Vance, a senior, threw for 1,542 yards and 11 TDS and added 1,432 yards and 17 TDs on the ground.

The final offensive utility selection is Oak Glen senior Hunter Patterson, who ran for 1,296 yards and 17 touchdowns while catching 45 passes for 829 yards and nine touchdowns. He also returned a kick for a TD and threw a TD pass.

The first-team kicker is Lewis County senior Jared Griffith, who was perfect on PAT kicks this year, booted four field goals, with a long of 41 yards and had 33 touchbacks on kickoffs.

Rounding out the first-team defense are three utility players who were playmakers on both sides of the ball in Roane County senior Josh Huffman, Robert C. Byrd sophomore Jeremiah King and Weir senior Sebastian Spencer.

Big 12 to allow one nonconference game

(AP) — Two people involved with the decision say the Big 12 will permit its teams to play one nonconference ...